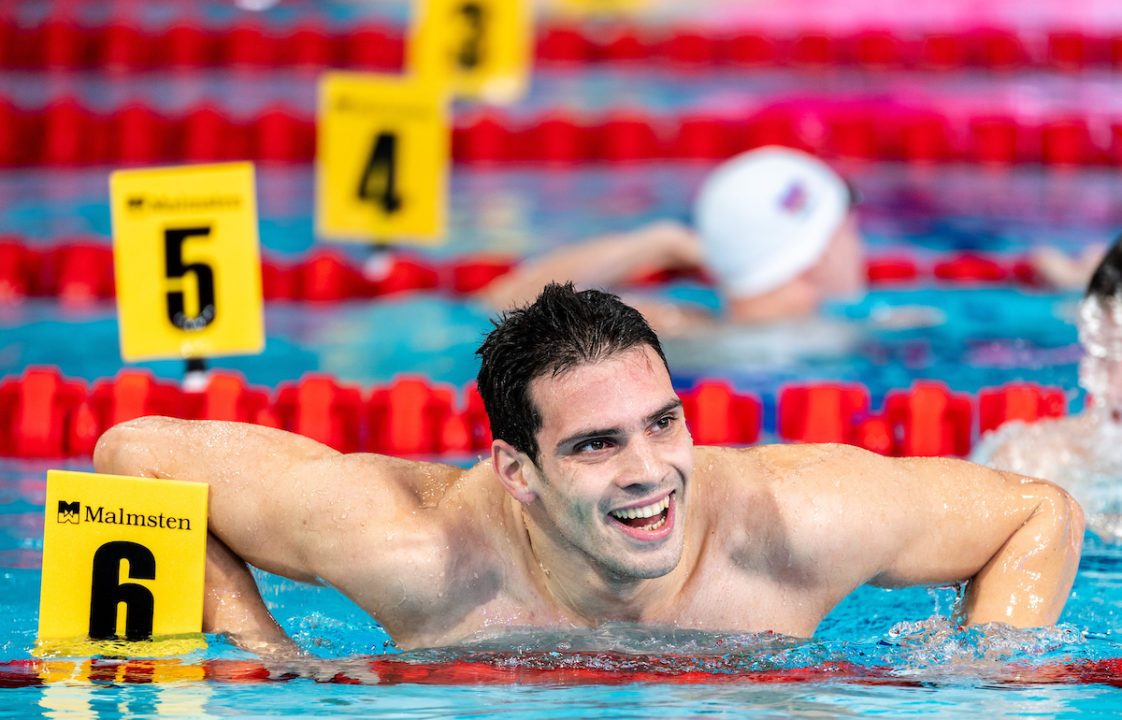 Read on to find out the 2020 Olympic implications of today’s swims at the Rotterdam Qualification Meet (RQM) in the Netherlands.

It was another big day for NC State commit Noe Ponti of Switzerland, as the 19-year-old fired off his 2nd national record in as many days.

The 2020 Greek Open Winter Championships concluded over the weekend, with rising stars and seasoned elites taking to the OAKA Swimming Pool in the hopes of qualifying for the Olympic Games, but also this year’s European Championships, both junior and senior.

Christou placed 10th in this event at the 2019 FINA World Aquatics Championships, touching in 53.56 there in Gwangju.

Here in Athens, Apostolos also reached the European Championships QT in the 200m back, hitting the wall in 1:58.08.

Another European Championships qualification time was achieved by IM maestro Andreas Vazaios. The man stopped the clock in a time of 1:59.68 to add his name to the roster for Budapest. Although his effort was well off his personal best of 1:57.98 from 2017, as well as the 1:58.27 he logged in August of last year, it was enough to hold off the field handily.

The field included two-time European Junior Champion Apostolos Papastamos, who settled for 4th in a time of 2:05.50. The soon-to-be-19-year-old produced 200m IM and 400m IM personal bests in Kazan last year, topping the podium with respective efforts of 1:59.93 and 4:15.18.

Papastamos would go on to take World Junior Championships bronze in the 200m IM in an even lower 1:59.62 before firing off a World Junior Record of 4:11.93 en route to gold in the 400m IM. However, he has since run into training facility issues.

His previous training home in Chania ran into financial problems, with the operator informing the Hellenic Swimming Federation that they could no longer afford to heat the pool. This allowed the pool temperature to drop below 24 degrees Celsius (75 Fahrenheit), well below the typical minimum competition temperature of 78 Fahrenheit.

As such, we reported how he will now train at this OAKA Swimming Pool, which is a 9-hour ferry ride/50-minute plane ride away from Chania.

Within the younger set, Georgia Damasioti set a new Panhellenic Youth Record in the 100m fly. She touched in 59.57 to dip under the European Junior Championships time standard, while also breaking Panagiotis Tsialta’s previous age record of 27.96 that’s been on the books since 009.

Winning the 100m fly at this meet, however, was Anna Ntountounaki, who busted out a swift 57.93. That gave her the gold in a Budapest-worthy time, adding to her accolades of recent, which also includes setting the national record at 57.67 in last year’s European Championships final.

After the meet, federation coach Nikos Kraounakis stated, “The races were very good, the athletes performed very well and we are very satisfied. Some of the Greek swimmers have come down with the flu, which impacted their participation.”

He went on to say, however, “I think we are on a very good track ahead of the Olympics. I think we can go to Tokyo with 8-9 athletes.”

Greece took a total of 14 swimmers (10 men, 4 female), including open water, to Rio for the 2020 Olympic Games. The nation was medal-less in pool swimming, with the highest finish coming from Vazaios’ 11th place result in the 200m IM.

However, Spyrido Gianniotis took the silver medal in the men’s 10k open water race for Greece.