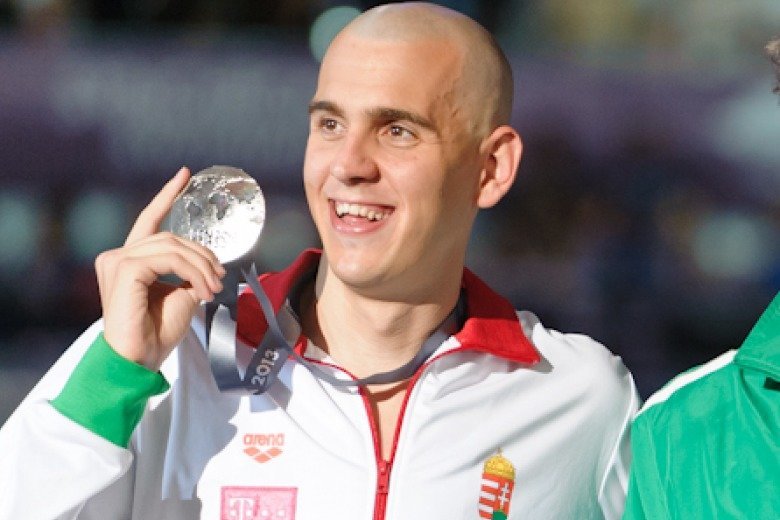 The biggest swim from day 7 of the 8-day Hungarian Nationals came in the men’s 50m freestyle. Krisztian Takacs, the Hungarian record holder in this event, threw down a 21.89 to win the event by over seven tenths over next-best competitor, country-mate Richard Bohus (22.62). More importantly, that time shoots him up from #22 in the world to #5.

Previously, USA’s Josh Schneider and Italy’s Marco Orsi were tied at 21.96 for the fifth best time in the world this year.

While Orsi wasn’t competing at this meet, Italy certainly had a strong contingent at this meet. They made their presence felt today in the sprint distances, starting the session off with a 1-2 finish in the women’s 50m fly. Elena Gemo took the title at 26.29, followed closely by fellow Italian Silvia Di Pietro (26.48). That time, for Gemo, moves her up from a tie for 22nd in the world to a tie for 19th in the world this year. Finishing third in that race was Evelyn Verraszto (26.92). Those three were the only swimmers to break 27 seconds.

The Italian performances continued to stand out, as Niccolo Bonacchi took over the top time in semifinals of the men’s 50 back. He touched in 25.70 to take the top seed going into finals. Seeded 2nd and 3rd behind him will be Egypt’s Youssef Mohamed (26.06) and Hungarian national record holder in this event Richard Bohus (26.08).

The Hungarians had several other impressive performances of their own. Perennial Hungarian powers Zsuzsanna Jakabos, Laszlo Cseh, and Boglarka Kapas each took an individual title today. Jakabos won the women’s 200 backstroke (2:11.53), Cseh earned the men’s 100 fly victory (52.49), and Kapas won the women’s 800 free (8:39.07).

Finishing 2nd behind Kapas was 15 year old Janka Juhasz in 8:40.64. Juhasz actually led Kapas, who holds Hungarian records in the 800 and 1500 free races, for the first 350 meters and managed to stick with her for the remainder of the race.  Juhasz is a relatively unknown youngster who actually almost won the 1500m free at the recent European Games in Baku. She was touched out by just tenths at the wall by Italy’s Sveva Schiazzano, but still took home a silver medal. Juhasz looks to be a talented up-and-coming distance power for Hungary.