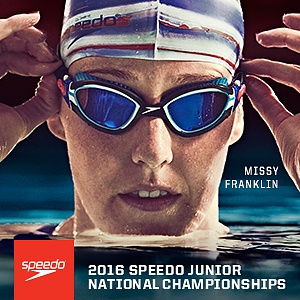 Watch Dakota Luther win the 100 fly, as well as the other race videos from Day 3 finals, at 2016 Speedo U.S. Junior National Championships.

2016 Speedo Juniors: All the Race Videos From Day 1 Finals

Watch all the racing from Day Two finals at Speedo Winter Juniors West.

Crean Lutheran girls won their 3rd straight CIFSS title, but 1st in Division II, having just moved up for the 2014-15 season..

Sophomore Taylor Ault of Sonora High School swept the 200 free and 500 free for the second year in a row;…

Erik Juliusson of Laguna Beach was the top qualifier in the 200 IM and second in the 100 back at the CIF-SS Division II prelims on Friday.

Ella Eastin of Crean Lutheran is in a new division this year and will be aiming to break two new records: 200 IM and 100 breast.

NBAC’s Sierra Schmidt is the 2014 U.S. Junior National Champion in the girls’ 400 free.

As we move further into championship season the times are getting faster and faster. See who caught our eye for the weekend of July 18-20, 2014.

Glendora won their first team championship since 2011 at CIF-SS Division 2 finals. Strong relays and consistent scoring in individual finals were key to their success.