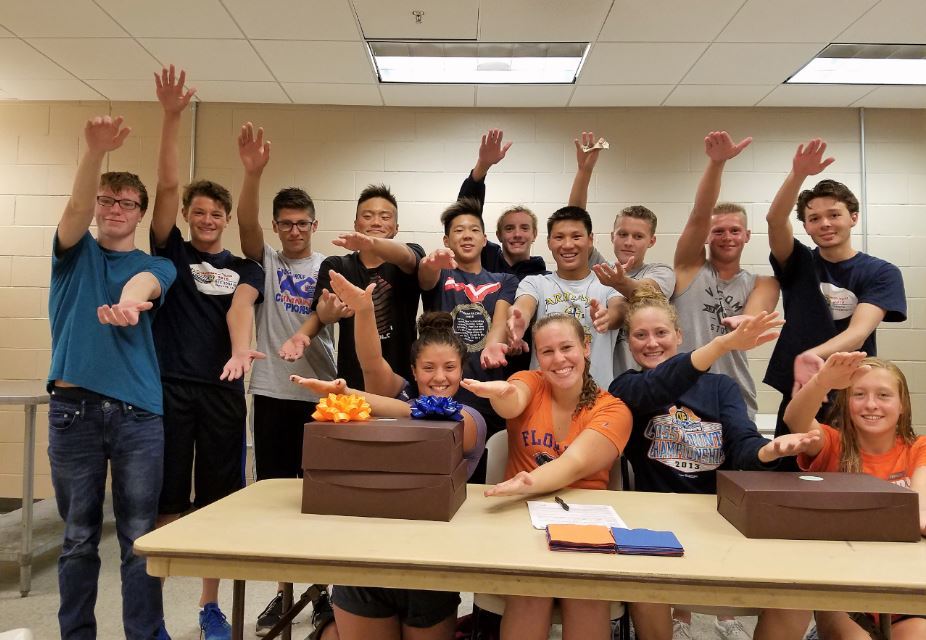 Ault is teaching her teammates at La Mirada Armada the "chomp chomp" in preparation for her stint at University of Florida for the next four years. Current photo via Rick Shipherd

Taylor Ault, who was recently named to the 2016-2017 U.S. National Junior Team Women’s Roster and is number 17 on our list of top 20 recruits in the girls’ high school class of 2017, has verbally committed to the University of Florida Gators. Ault said that her choice was influenced by, “Florida’s reputation for hard work and a unified team purpose. Coach Troy is one of the best distance coaches in the country and his team believes in the method, I am so excited to be a part of that.”

Ault is a middle-distance and distance freestyler from Sonora, California. She swam for her high school during her freshman and sophomore years, winning the 200 free and 500 free both times, and breaking the CIF-Southern Section Division II records in the 200 free as a sophomore. She opted not to swim short course last year in preparation for the Olympic Trials, so her best SCY times date back to sophomore season (1:46.01 in the 200 free, 4:41.73 in the 500 free, and 16:13.41 in the mile).

Ault swims for the La Mirada Armada swim club in Southern California. She won the 800 free on Day 1 of the 2016 Speedo Summer Junior Nationals, then placed second in the 400, third in the 200, and fourth in the 1500. At Winter Juniors West last December she was runner-up in the 500 free and fifth in the 1650. Ault weighed choices closer to home in the Pac-12, but instead opted for Gainesville, the furthest point on the map from home. Ault stated, “I felt like I wanted to challenge myself with the most demanding program I could tackle, while placing myself in an environment out of my comfort zone.  I think that the Florida choice is the way for me to grow as a person and an athlete. I am thrilled and thankful to coach Troy for allowing me to be a Florida Gator”