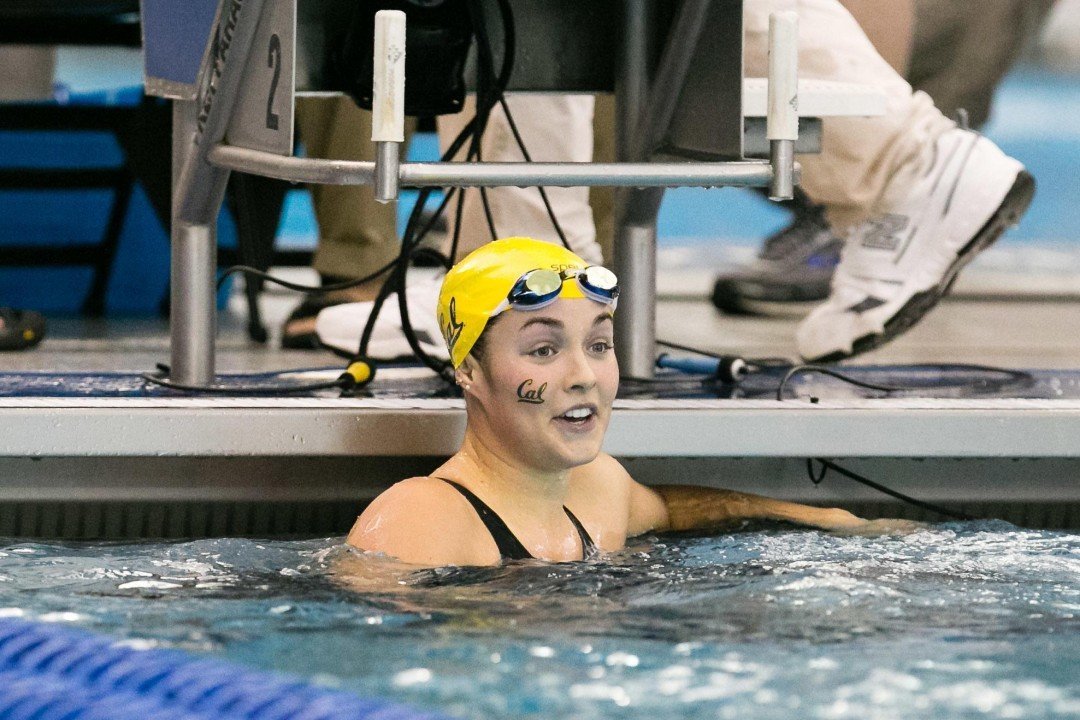 Rachel Bootsma had a resurgent 2015 season, and that momentum joined by a devastating recruiting class make Cal the early favorite picks for the 2016 NCAA title, pending one major enrollment decision elsewhere in the Pac-12. Archive photo via Tim Binning/TheSwimPictures.com

The 2015 NCAA Championships have only just wrapped up, but for true swimming nerds, it’s never too early to start looking to next year. Since we here at SwimSwam fit squarely into that category, we’ve started running some numbers on the 2016 NCAA season.

Below is a chart with the top 15 women’s teams from this season’s NCAAs, along with how many of their points will be vacated by departing swimmers. The “points lost” category is mostly outgoing seniors, but there are some notable exceptions.

Cal’s Missy Franklin was just a sophomore in 2015, but has officially turned pro and won’t compete for the Bears next year. Beyond that, we’re likely to see a number of athletes choose to take Olympic redshirts next season. The most notable name to already announce her intention to do so is Minnesota’s NCAA breaststroking champ Kierra Smith.

Things could stay pretty stable near the top next year. Georgia had a big class graduate, losing more points from their outgoing seniors than any other program. (California only passes them in points lost when you factor in Franklin’s departure). Georgia has some solid young talents like Kylie Stewart and Meaghan Raab who should earn more central roles next year, but with the rapid rise of Cal and Stanford, the Bulldogs could have a hard time holding onto second place.

At the other end of the spectrum is Virginia. Coming off their highest-ever finish (5th place), the Cavaliers graduated just 2 individual points. Though they’ll have some relay legs to fill in, basically all of Virginia’s core returns, including Leah Smith and Courtney Bartholomew.

Virginia is projected to pass up Texas A&M next season purely in terms of returning points, and the margin is actually quite wide. A&M was only two points ahead of Virginia at the end of the 2015 meet and graduated almost a quarter of their points.

Without further ado, here is the returning points chart, followed by a brief look at overall predictions for next year.

The race at the top next season probably depends heavily on a forthcoming decision from Katie Ledecky. The world’s best distance swimmer, a Stanford signee, could elect to postpone her collegiate enrollment, choosing not to switch up her training and move halfway across the country 9 months out from the Olympic Trials.

Stanford is 55 points behind Cal in returning points, and Ledecky likely makes that up all by herself. But if Ledecky chooses to defer her enrollment a year, something Cal’s top recruit Abbey Weitzeil has already announced she’ll do, the landscape changes majorly.

Still, Cal and Stanford have been running away with the nation’s top recruiting classes, and with Georgia’s sustained losses, it’s somewhat fair to expect a Pac-12 showdown for next year’s NCAA title.

Stanford, of course, returns all-star sprinter Simone Manuel, and brings in a top-tier IMer in Ella Eastin. But for now, we’ll give Cal the edge, given they nabbed 4 of the top 5 recruits in our pre-season rankings: Weitzeil, backstroker/IMer Kathleen Baker, butterflyer Katie McLaughlin and backstroker/sprinter Amy Bilquist.

Virginia and Texas A&M both look poised to round out the top 5, with Louisville slowly but surely creeping up. It was a blowup season for Louisville, and that makes them a little unpredictable next year. It wouldn’t be a shock to see them come back down to earth a little and fall into the 6-10 range. On the other hand, they’ve still got another year of Kelsi Worrell, who is now the nation’s best all-around butterflyer and a pretty elite sprint freestyler too.

One team to watch based on returning points is Florida. The Gators had a bit of a disappointing season slipping back to 9th overall, but they graduated zero points, and could potentially get stud backstroker Sinead Russell back. Russell missed this season after a major health scare, and her status going forward is still very much up in the air.

Texas could also be on the warpath. They’ve got the 8th-most returning points, plus bring in a great recruiting class that includes rangy freestyler Quinn Carrozza and do-everything SwimMAC product Nora McCullagh.

The top teams most hurt by graduations are definitely Wisconsin and Arizona, and each team lost most of their points based on graduating just one swimmer.

Ivy Martin was Wisconsin’s rock all year, and her 32 individual points are almost a third of the Badgers’ total. The loss of her relay legs probably hurts even worse. Chase Kinney looks ready to step in as a competent lead sprinter, but the dropoff is still big from Martin, who was one of the best college sprinters in history.

Meanwhile Arizona lost diver Samantha Pickens, who won the 1-meter springboard event and scored on 3-meter. The Wildcats have a nice recruiting class with three swimmers ranked in our top 10 and backstroker Taylor Garcia checking in at #8.

Everyone else should just pack it in we all know it will be CAL or Stanford. All the other D1 Programs may just as well fold or go down to d2 or d3 status, the revenue producing sports can use the $

I was interested to see that Cal only lost points equally to Stanford and returned more even with the loss of Franklin! The only reason the preview could be considered way-too-early at all is that all of the red-shirts/deferrals have not been announced yet. Please do an addendum/update to this article when they have, thanks.

I know Ledecky hasn’t decide yet; besides Weitzel, have any of the Olympic likelies/hopefuls you mentioned above, or any others not mentioned here, announced whether they’re in or out this fall?

On the Canadian trials webcast , one of the announcers said that Chantel Van from Georgia was red shirting next year for the Olympics.
Jared do you know anything more about this ?

CanSwim13 – we haven’t heard anything official on Van Landeghem, but that one wouldn’t surprise me. Canadians are among the most likely to redshirt NCAA season, given how close Canadian Olympic Trials are to the NCAA championships.