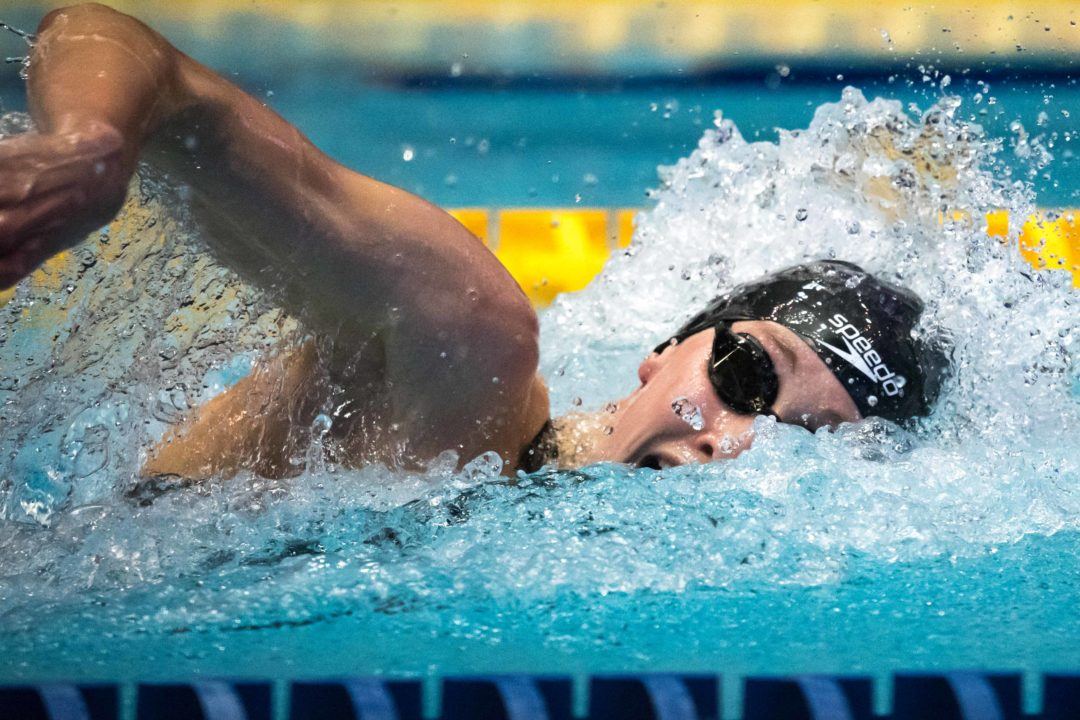 Taylor Ruck will be eligible to race up to five events at the 2021 Canadian Olympic Trials. Archive photo via Mike Lewis/Ola Vista Photography

With a few months away from their Olympic Trials, we take a look here at how many Canadians have hit the FINA A in the three most recent swim season.

Titley notes that if you ever see Swim Canada at a Pro Swim in the US, they will do a full swim set after their racing session

An initial list of athletes eligible to be invited to the Canadian Olympic Trials has been released.

Swimming Canada tweeted out the list Wednesday morning, which includes the top-30 swimmers in each Olympic event as of December 18, 2020. Appearing on the list does not guarantee a swimmer a spot at April’s selection meet, as only 20 swimmers per event will be invited.

Swimming Canada has posted the initial ranked list of 30 swimmers per Olympic event who are eligible to receive an invitation to the Trialshttps://t.co/fVQxpU3r15 pic.twitter.com/D9e4xn9a2y

The process to whittle the list down to a maximum of 20 athletes per event will be initiated on January 6.

Two-time LC World Championship medalist Kayla Sanchez is qualified to swim six events at the Trials, while notable names Taylor Ruck, Sydney Pickrem and Rebecca Smith are all in line to enter five.

Finlay Knox, Cole Pratt, Mabel Zavaros and Summer McIntosh are listed in a staggering 10 out of 14 events, while both Markus Thormeyer and Emily Overholt will have the opportunity to swim up to seven races. McIntosh is notably just 14 years of age, having set numerous national age group records in both the 11-12 and 13-14 age groups over the last few years.

2016 Olympic gold medalist Penny Oleksiak and 2019 World Champion Maggie MacNeil have both qualified in three events, while three-time Olympian Brent Hayden is set to compete in the men’s 50 and 100 freestyle after coming out of a seven-year retirement last October.

With Finlay Knox surely dropping some event, it will be like NCAAs watching the “cut line” to see who gets in next

Wow. Finlay is a beast! Future of Canadian male swimming.

So-so year for that UNCAN team. Was hoping they would unexpectedly produce another Condorelli, Pickrem or Ruck like they have in the past. 🙂

He – ya he was kidding

Wonder if those training in the US would be able to get some sort of exemption with a covid test prior to travel and after arriving or if they will have to enter the 14 day quarantine that says no gyms or pools during that time and risk losing all of that training right before the biggest meet of their lives.

Have heard SNC making athletes moving between provinces quarantine 7-14 days so if you are in US best to move now for canadian trials and take quarantine sooner vs later. The international travel rules are governmental regulated have been known for sometime and with numbers going up really need to be strategic for training break sooner vs later. Many top swimmers training in US have already made move back to Canada with mandatory 14day quarantine. Do not see that changing with Covid numbers getting far worse than better.

@Pullbouy, correct. Athletes need to make plans around national protocol and safeguards. Rules are not broken because you’re an athlete, plan accordingly.

Agree. The mandatory 14 day quarantine for US/International travellers is governmental regulated (officers randomly show up at designated quarantine location to monitor & have had several friends experience). Athletes are not essential workers so no exemptions. In Ontario the hp athlete exemption is completely separate and only applies to those who have completed travel quarantine. So all the swimmers training in US might want to think about heading north very soon to take the 2wks out of water just over 3mths out from trials.