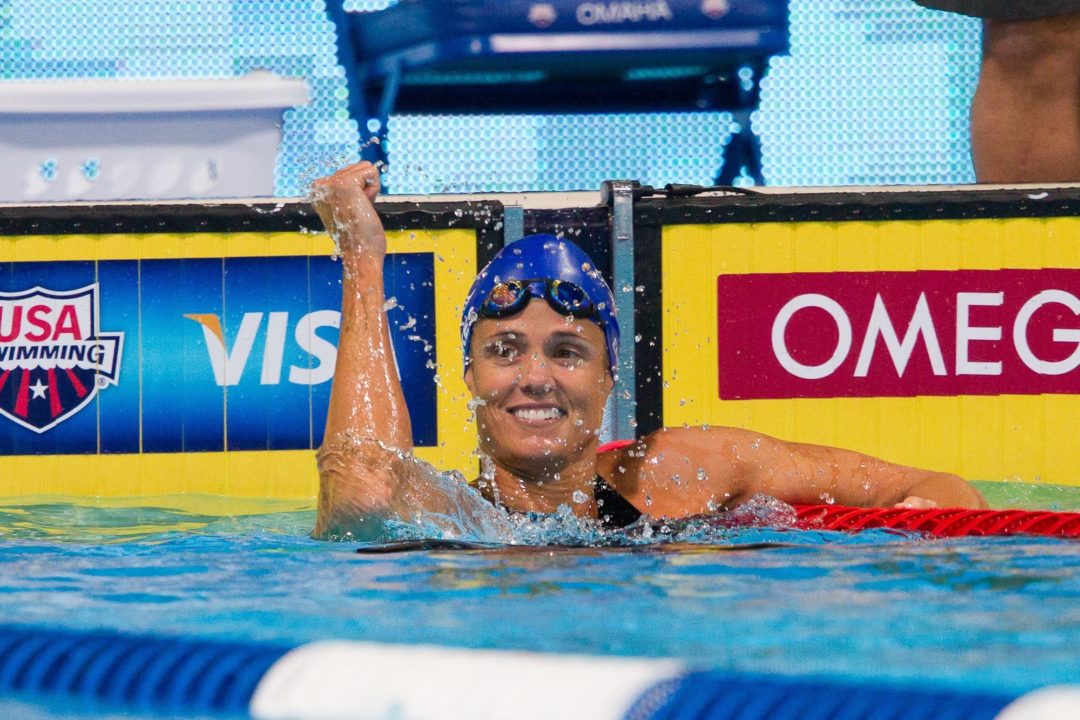 Three swimmers are among the finalists for the United States Olympic and Paralympic Hall of Fame Class of 2019: Dara Torres, Erin Popovich and Trischa Zorn. Archive photo via Tim Binning/TheSwimPictures.com

Three swimmers are among the 24 finalists for the United States Olympic and Paralympic Hall of Fame Class of 2019.

Dara Torres is among the 15 Olympians, while Erin Popovich and Trischa Zorn are among the nine Paralympians recognized. Eventually the group of finalists will be narrowed to five Olympians and three Paralympians.

Torres owns 12 Olympic medals, tied for the most by any female Olympic swimmer, while also boasting the record for the oldest swimmer to win a medal in Olympic history and the oldest U.S. Olympic swimmer. She also became the first American swimmer to appear in five Olympic Games. Torres, who set eight American records, earned 16 national titles from 1982 to 2007.

In her final stint at the Olympics in Beijing in 2008 at age 41, Torres earned silver in the 50 free, 400 free relay and 400 free relay, putting her name in the American record books in all three events.

In her last competition before announcing her retirement, Popovich won five silver medals (100 free, 400 free, 100 breast, 50 fly and 200 IM) and a bronze (50 free) at the IPC Swimming World Championships in Eindhoven, Netherlands, in 2010.

Zorn is the most decorated Paralympian in history, notching 52 medals across seven Paralympic Games, including 46 individual podium appearances (32 gold, 9 silver, 5 bronze). All told including relays, she won 38 golds, 9 silvers and five bronzes. In her standout appearance, Zorn racked up an eye-popping 10 individual gold with 10 world records and two relay golds at the 1988 Paralympics in Seoul, Korea.

“It is a privilege to introduce these deserving finalists for induction into the U.S. Olympic & Paralympic Hall of Fame,” said Sarah Hirshland, USOPC CEO. “They represent the pinnacle of athletic achievement and personal excellence, both on and off the field of play. We honor them and are pleased to memorialize their legacy as America’s most inspiring athletes and teams.”

The U.S. Olympic & Paralympic Hall of Fame finalists for 2019 include:

“Congratulations to the athletes and teams being celebrated as finalists for the U.S. Olympic & Paralympic Hall of Fame,” said Dick Fosbury, U.S. Olympians and Paralympians Association president. “These individuals have already achieved so much both on and off the field of play during their careers, breaking barriers and inspiring the next generation of athletes. On behalf of USOPA, we are honored to have these individuals represent the best of Team USA.”

Starting in 2019, the hall of fame will see increased Paralympic representation to reflect the burgeoning contributions of U.S. athletes to the Paralympic Movement, and now reflects the U.S. Team sizes at the Olympic and Paralympic Games.

In addition to Olympians, Paralympians and a team, the class of 2019 will include two legends, one coach and one special contributor determined by the U.S. Olympic & Paralympic Hall of Fame nominating committee.

The class of 2019 will be announced on Monday, Sept. 23, and inducted on Friday, Nov. 1, during a ceremony in conjunction with the all-alumni U.S. Olympic and Paralympic Team Reunion in Colorado Springs. Red carpet arrivals, interviews and the induction awards dinner at the U.S. Olympic & Paralympic Training Center will be open to the media; credential information will be available in October.

Visit TeamUSA.org/HallOfFame to explore the history and achievements of all 141-current hall of fame members.

As a teammate of Trisha, she is the reason all of us benefitted from the paraswimming movement. She is a trailblazer and could be more proud to have been her teammate for three Paralympic teams.

Congrats to all 3 finalists. I was at Trials in 08 when Dara made the team in the 50 free at age 41, truly inspitational and amazing!