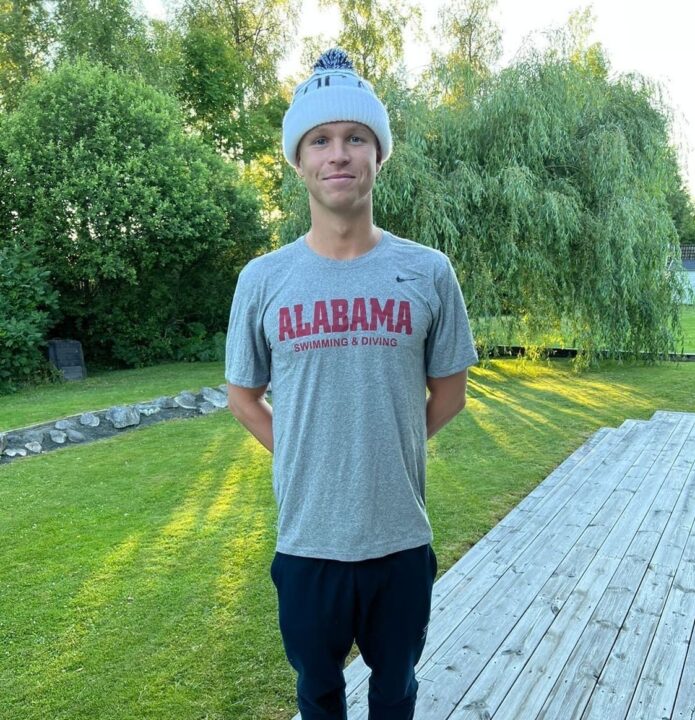 Johansson won the 500 freestyle at the 2019 Pac-12 Championships during his freshman season. He represented Sweden at the 2020 Tokyo Olympics. Archive photo via Victor Johansson

He entered the transfer portal in November 2021 with the intention on swimming in graduate school.

Johansson did not compete for USC during the 2020-2021 season, the season that athletes were given an extra year of eligibility due to COVID-19.

The Alabama men tied with Tennessee for second place at the 2022 SEC Championships. Notably, Johansson’s best events, the 500 and 1650 freestyle, were the team’s lowest-scoring events as they scored 0 points in the 1650 and 20 in the 500.

Alabama had four swimmers qualify for NCAAs this past season as they scored 91 points to finish 14th. Johansson’s best times would have finished 12th in the 1650 and 13th in the 500 freestyles at NCAAs. If Johansson is able to replicate his best times again, he has the chance to add to Alabama’s points.

Johansson told SwimSwam that he was drawn to Alabama because of “the great team culture. The atmosphere of a team who wants to win, and do everything they can to do it. They have world class facilities and a coaching staff that would do anything for the team. Loved every second of my two visits!” He also said that he knows it will be a change from Los Angeles but he loves new challenges.

Lol. This makes no sense. Bama is washed and academically it’s a step down.

I was with him on one of the visits and distance coach Fujan showed great interest in what Victor did to perform at his peak. Understanding for high volumes of LA01 training that has worked very well this far. Three distance swimmers of international level but still a group small enough for Taylor made main sets.

Victor will have a great training partner in Charlie Hawke, who has done very well with Fujan this past year and so far this summer

Yup. Victor should have stayed at USC and gotten his degree there. USC is Ranked #27 in US News University Rankings. Alabama at #148. ‘Nuff said.

The only people ranking USC that high are USC graduates.

The US degree doesn’t have much value in Sweden

Against all odds, transferring to Alabama leads to a better academic institution…