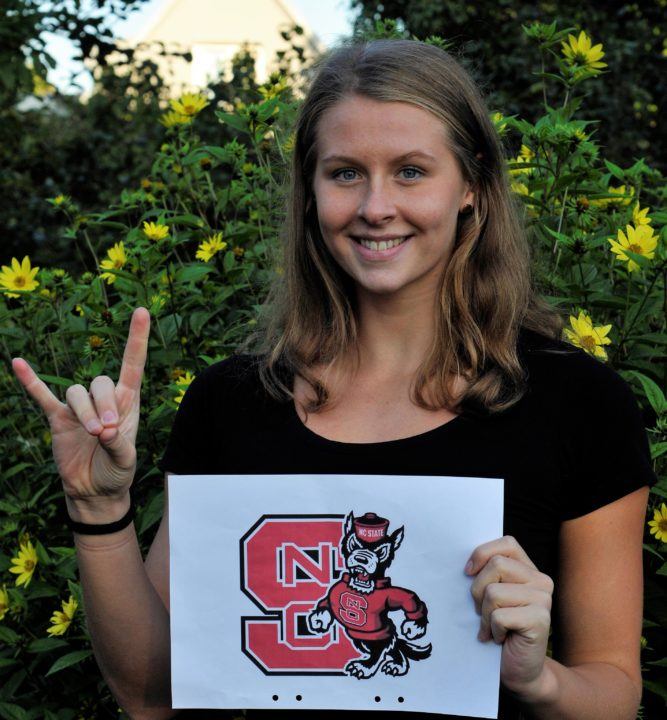 Sophie Hansson, a breaststroker who represented Sweden in Rio, Windsor, and Budapest, has verbally committed to swim for NC State beginning in the fall of 2018. Current photo via Sophie Hansson

Sophie Hansson, who hails from Helsingborg, Sweden, has verbally committed to swim for North Carolina State University beginning in the fall of 2018.

“I’m excited to announce my verbal commitment to North Carolina State University. The environment, coaches and swimmers made me feel at home and I am looking forward to be part of the wolf pack family next fall!”

Hansson represented Sweden at the 2016 Olympic Games in Rio, competing in the 100 breast where she finished 27th in heats. She also swam for Team Sweden at 2016 FINA World Short Course Championships in Windsor last December, and again this summer at the 17th FINA World Championships in Budapest. At Short Course Worlds she was a semi-finalist in the 50 breast, finishing 15th, and was 23rd out of heats in the 100 breast. In Budapest she placed 20th in the 50 breast and 19th in the 200 breast.

Hansson has had relatively more success in short course meters than in long, which is good news for the Wolfpack. She will fill a gaping hole in the Pack’s lineup, as her best converted SCM 100 breast would have been runner-up at last year’s ACC Women’s Championships, right up there with NC State’s Kayla Brumbaum, who wrapped up her eligibility last season. Hansson’s converted SCM 200 breast would have scored fourth, just behind Brumbaum. The Wolfpack’s only other scorer, Lindsay Morrow (22nd in the 200 breast), will be a senior when Hansson arrives.

The Wolfpack has gotten off to a quick start filling their class of 2022. Hansson will join the following verbal commits in Raleigh next fall: Emma Muzzy, Kylee Alons, Maddie Smith, Shannon Kearney, and Taylor Bennett.

nc state’s 2018 class is impressive. sort of surprised she didn’t go to usc with her sister, but not really.

USC has a lot of breaststrokers. She may have wanted to go somewhere where she could contribute on relays right away.

they’ve got a ton of breaststrokers who are better at the 200 (scott, vose) in my opinion

At one level it’s a very fair assumption, but on another level, USC is very strong in breaststroke especially since they got Maggie Aroesty, and it’s unlikely that she would be as much of a key contributor there, particularly on relays.

I wouldn’t say very strong… did they have anyone score in the 100 breast at NCAA last year? What did Aroesty go in breast events last year? Someone like Sophie would contribute at the NCAA level right away… and I’m talking about any team!

Might have been nice to go to USC with her sister but I think NC State is a better team overall and is a team on the rise unlike USC women, who seem to be doing the opposite.

THIS is the breaststroker the Wolfpack need. There’s a lot of talent among the current breaststroke group for the ladies, but this is a big-time recruit that will definitely help out the Pack in a big way on the breaststroke side. Awesome pick-up!

I guess wolves have horns in Sweden??

She has her hand correctly positioned