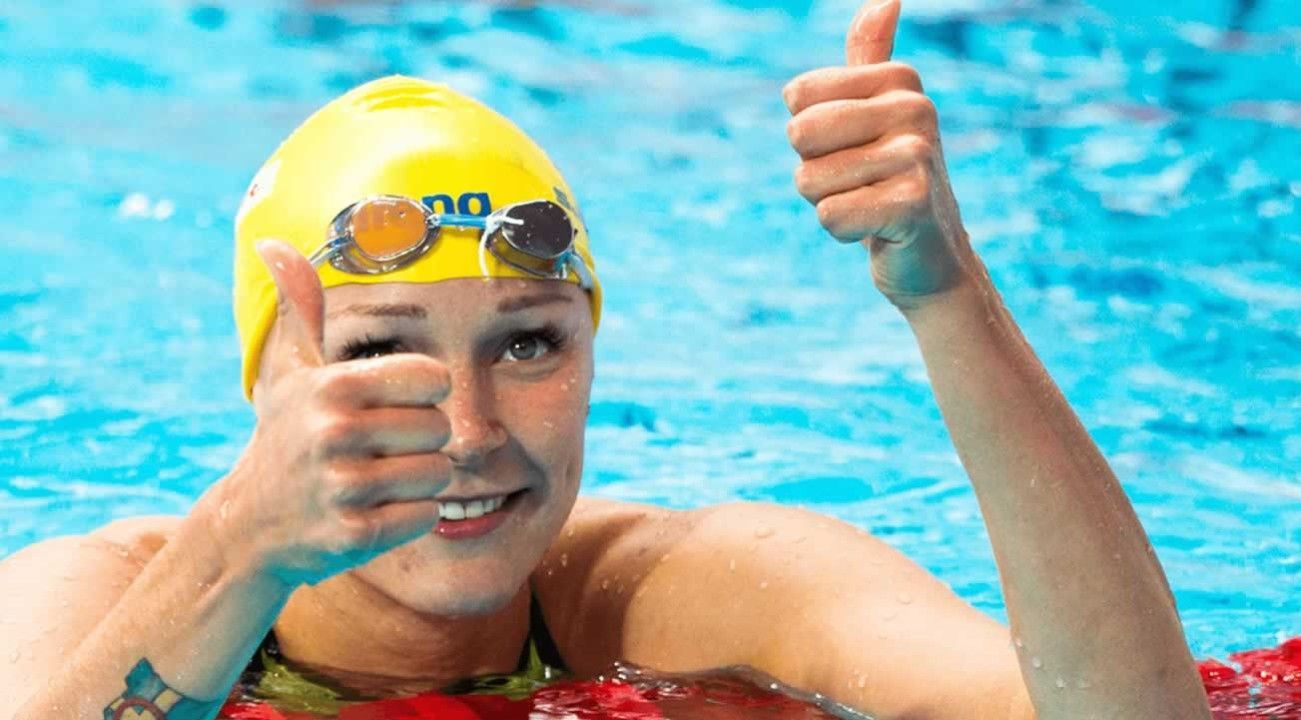 Sarah Sjostrom has stomped her name once again upon the women's 100 fly World Record. Current photo via Tim Binning/TheSwimPictures.com

It’s a World Record that we all saw coming, but was still incredibly impressive on Sunday evening in Kazan, Russia at the 2015 FINA World Championships.

In just the semi-finals, the very-first swim of the very-first evening session of the meet, Sjostrom swam a 55.74 in the women’s 100 meter butterfly. That broke Dana Vollmer’s 2012 record of 55.98.

Sjostrom first won the World Championship in this event (and broke the World Record) at just 15-years old, swimming 56.06 in a polyurethane suit. The record at the time was a huge shock (aside from the fact that every record was being broken), and it stood until Vollmer broke it at the 2012 Olympic Games.

Since 2012, however, and especially in the last year, Sjostrom has begun to catch up and surpass her suited times. That includes a 24.43 in the 50 fly in 2014 that shattered that World Record.

Sjostrom still hasn’t recaptured the same full back-half speed as she had in 2009 – a year where everyone had back-half speed in part because of the lack of fatigue thanks to the buoyancy of the now-outlawed suits. But she came very close on the back-half, and more importantly add her blinding 50 meter speed to re-break the record.

The 21-year old broke the European Record already this year in 56.04, but had a poor finishing stroke. That made the target for the World Record a clear path forward.

Nobody was within a second of her in the semi-finals, and while we could see a few 56’s in Monday’s medal round, Sjostrom won’t be caught if she keeps her head.

Yeah!! But I still believe she has another few tenths to shave off that time. Gold will probably be more important tomorrow though.

Yes, I think you are correct. Sjöström clearly was after it today.

And I was wrong. When I saw Sjöström was behind Vollmer’s split time at the halfway, I could have bet she is not going to make it. Albeit Sjöström always comes back fast in the 100m fly, Vollmer’s second half was also extremely fast. However, Sarah did it and I was wrong.

Interesting to see how she will execute it in the final tomorrow. It seems Sjöström is quite superior at the moment in this event and I believe she has some breathing room for gambling if she just wants to try something new. Maybe she goes out full speed, as if it were 50m, and… Read more »

True. Given her 50 PB you’d expect her to maybe go out in 26.1 to break the WR. But she’s shown now that they are two vastly different races. She has the natural fly technique obviously, but tactically they are nothing alike. The quick openings haven’t been working out for her. Minimum effort in the first 50 and then have the endurance to keep up the stroke rate coming back seems to be the way to go. This WR meant a lot to her.

For her 50 WR she did not breath once, and had a very small amplitude of her undulation. For her 100 WR yesterday she had a much more typical butterfly stroke, and breathed every stroke (at least on the second 50). So yes, a vastly different stroke style & race.

She was long on both walls in that semi. It looks like she could honestly have another half second to drop. I’m also secretly sensing that Sjostrom is going to take the 100free as well, Cate just didn’t look as impressive as she has in the past. (She didn’t need to be, but…. )

Took the words right out of my mouth. Yeah, I wouldn’t be at all surprised to see her go 55.2 tomorrow. Crazy where she’s taken the event. She’s got a good second (more like 1.2) on the rest of the field. If she were able to properly train for the 200 fly, I think she could take that crazy record down as well.