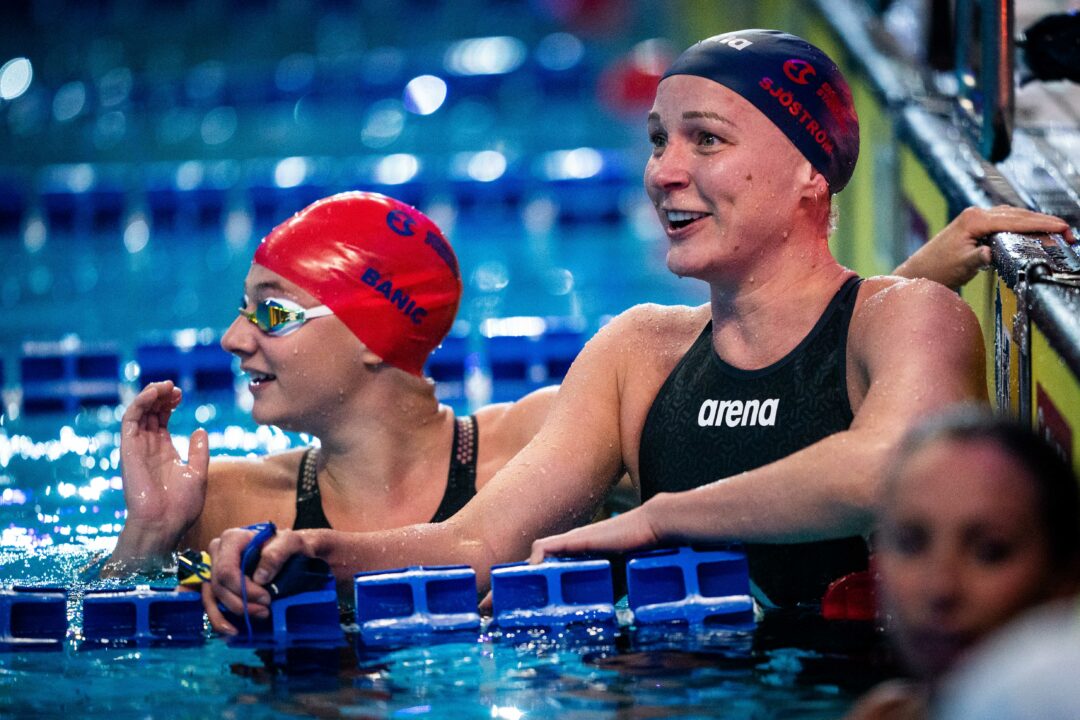 After leaving Naples for what was supposed to be the remainder of the regular season, Sarah Sjostrom returned on Saturday to continue racing for Energy Standard. Archive photo via Mine Kasapoglu/ISL

Swedish superstar swimmer Sarah Sjostrom has made a surprise return for the last 2 weeks of the International Swimming League regular season.

Sjostrom says that after returning home to Sweden, she received positive medical reviews that green-lit her to return to complete the regular season.

“I recently had an X-Ray to check my elbow and everything looked perfect,” the 28-year old said. “The plan was to only swim the first two matches and then go back to training, because I thought it could be too much racing for me. But since my elbow feels much better than I thought was possible at this time, I started thinking this week that maybe it could be a good idea to go back.”

Sjostom slipped on ice and broke her elbow earlier this year, but still recovered well enough to win an Olympic silver medal in the 50 free in July. The plan, however, was for her to swim the first two weeks of the regular season of ISL and then return home to Sweden to complete rehab.

But instead, she arrived back in Naples on Saturday morning to compete Saturday evening.

Energy Standard declined to comment on Sjostrom’s surprise comeback, but she says that she plans to race both this weekend (Saturday-Sunday) and in the team’s regular-season finale next weekend.

Sjostrom says that the draw of prize money is also part of what pulled her back. She says hoping to buy a home in the expensive housing market of Stockholm soon, and the prize money will contribute to that.

Sjostrom was the ISL’s leading earner in season 1 with around $140,000 in prize money. In season 2, she ranked 5th in the league with about $175,000 in earning. Her impact was hindered by missing a meet and being limited in others with a back injury.

So far this season, she’s already earned just short of $45,000 through 2 weeks of competition. At the time of her departure from Naples, that ranked her 2nd only to Caeleb Dressel.

Dressel’s departure makes a healthy Sjostrom the favorite to earn the league MVP award, and the $100,000 bonus that goes with it, presuming her Energy Standard team advances forward to the final.

From a team perspective, Sjostrom’s return will give ES a boost headed into a big rematch with a reloaded London Roar team. In their last matchup, with Sjostrom in Week 2, Energy Standard dominated. But London has since welcomed back Kyle Chalmers and Emma McKeon, who have already made a big impact – the team upset the defending champions Cali Condors last week, and that was with Chalmers as a relay-only swimmer.

We’ll find out in a few hours what Sjostrom will be swimming – early in the season, she had a lighter-than-normal schedule as she continues to work her way back from that broken elbow earlier this year. The team’s depth in the butterfly races (Maddy Banic and Anastasia Skurdai) gave them the luxury of letting Sjostrom skip the opening 100 fly.

With Sjostrom back, plus the boost of Florent Manaudou and Femke Heemskerk (though head coach Tom Rushton says they’ll only swim relays this week), Energy Standard should be back in control of their path to an undefeated regular season and a #1 seed headed into the play-off round.

I have no evidence, but that’s my feeling about the sudden return. Especially since it was presented that she was heading home to continue her elbow recovery and would return for the post-season.

Why would they bother though? With two wins, they’re guaranteed top 4. Even if they came second for the next two matches they would have been fine.

More likely she wants to keep herself in contention for season mvp now that Dressel has gone home.

of course both cbs and cbc will not show this match, tomorrow’s 100 free between sjostrom, mckeon and haughey could be one of the best races of the season.

Cbc only shows meets that include Toronto. The Canadian team. Which makes complete sense.