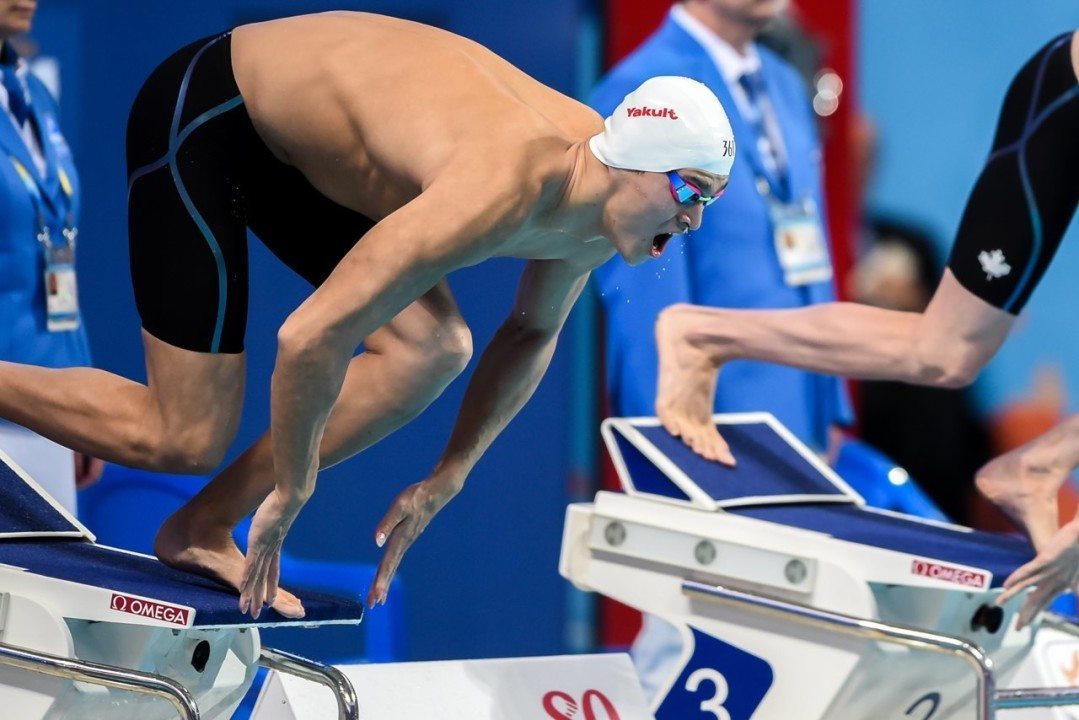 Freestyle ace Sun Yang of China has tweaked his start technique and is feeling confident heading into Budapest. Archive photo via Peter Sukenik/www.petersukenik.com

The smooth flowing freestyle mechanics of Olympic champion Sun Yang are universally praised and have served the Chinese swimmer well on the international swimming stage. In Rio alone, Sun nabbed the coveted 200m freestyle gold medal and came close in the 400m freestyle as well, earning silver in the event.

Since Rio, however, the 25-year-old hasn’t been satisfied and has been on the hunt for even more ways to improve his racing. Already possessing a huge weapon in his distance per stroke and overall freestyle efficiency, Sun looked to his race start as an area of improvement.

Reviewing past performances, Sun’s reaction times fall in the .74-.79 range, while fellow 200m freestyle competitors James Guy and Chad Le Clos clock reaction times off the block more towards the .65 target. May seem like a small opportunity, but when racing come down to hundredths, elite athletes seek out any edge no matter how minute.

“I am used to entering the water slowly and trying to catch up from behind over the first half of the course. It’s a waste of strength. If I can just start as quickly as most of my opponents, I sure could swim faster and finish strong,” Sun told China Central Television recently.

At April’s Chinese National Championships, Sun utterly dominated, winning all 5 freestyle events ranging from the 100m to the 1500m. His respective 200m and 400m performances of 1:44.91 and 3:42.16 remain as the world’s top times heading into the 2017 FINA World Championships. As impressive as Sun’s wall-to-wall prowess is, he can easily be pointed to as the last swimmer off the blocks in the 200m distance, per the video below (he’s in lane 4). His launch here is fairly representative of his typical reaction at the start.

Not revealing the actual technique changes that he has made to his start, Sun simply says that he is in ‘great shape’ and ‘pretty confident now’ heading into Budapest.

“The adjustment of my starting technique is part of my preparation. I hope I can test it at big events like the worlds and then hone it to perfection with more intensity in training leading up to Tokyo.”

Why would he be a coach-able athlete and make a technical change when he could just keep doping his way to the top? He’s already so good, plus he’d have so much more time to spend splashing competitors and not showing up for races. Gotta weigh out the options here, this doesn’t seem like a wise investment on his part.

Will he wear the Pink Suit for all his races? Doesn’t the color pink make you weaker?

He probably thinks it is light red. Red has always been his lucky color since he was a kid. Plus he loves pink.

2
0
Reply
IMs for days
Reply to  Hater of swimvortex

You do realize thorpe and sun are the only people under 3:41.5 in textile, and Sum, while lookimg in great shape thos year, has only done it once.

2
0
Reply
Hater of Swimvortex
Reply to  IMs for days

I thought Thorpe used a supersuit that also covered his arms?

Does he have a TUE ? That was all he ever needed .

Keep trolling but he will just keep winning. We all no he has the 2free and 4free under his belt already.

You got this Sun! Don’t worry about the haters. They have no clue how hard you worked to get to where you are. You earned all the medals you won through hard work, dedication, and sacrifice. You’re the best freestyle swimmer currently, and I can see you bringing home more gold. You don’t need to prove or explain anything for what happened in the past. Keep your eyes on the goal and you’ll achieve it.

not sure about the best freestyler …..but hey , his stroke is amazing to watch ( same for Clark Smith )

Glad you prefaced a currently in there. Cause Thorpey sh*ts all over this bloke.

Sun Yang 3:40.14 and he lifted up his head.
Imo Yang is the superior swimmer (no offense to what Thorpe has done, but he had a killer suit advantage), and nobody is sh*tting on anyone here.