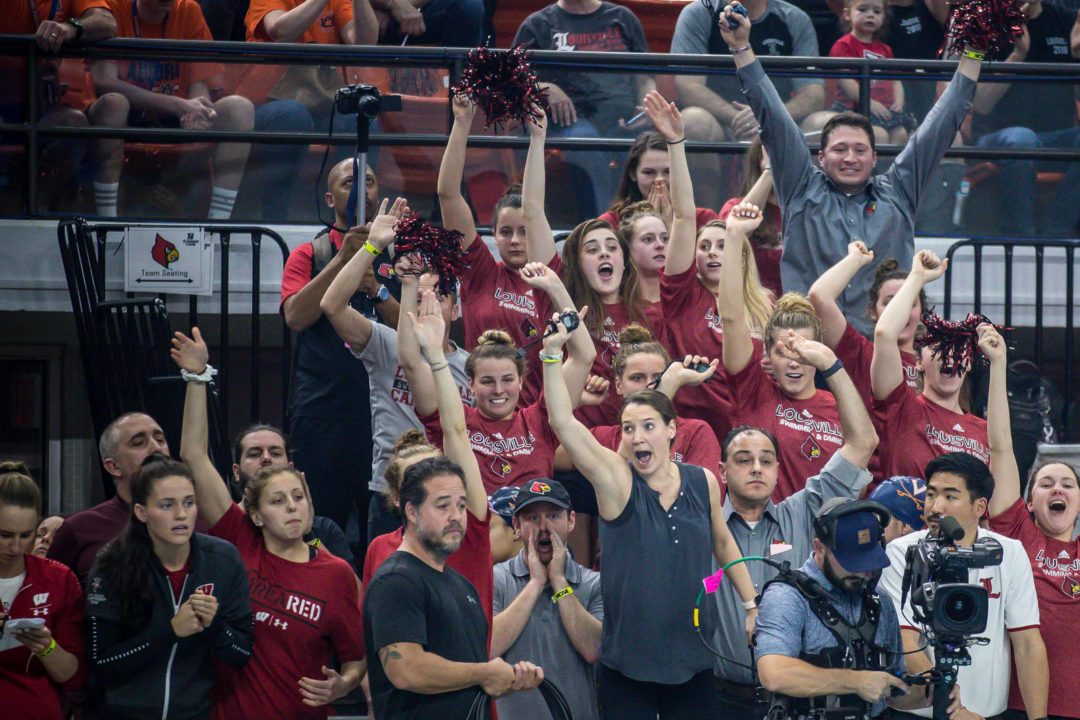 Sophomore Maria Sumida went 3-for-3 this afternoon as the Louisville Cardinals opened up their season with a home at home over Xavier. Archive photo via Jack Spitser/Spitser Photography

Louisville went 16-for-16 on the afternoon, sweeping every event in the Cardinals’ first dual meet of the 2019-2020 season. The Cardinals won 194 to 62 despite exhibitioning some swimmers over the final few events.

Freshman Christiana Regenauer made the most of her first meet with a 23.51 victory in the 50 free. Regenauer also teamed up with Arina Openysheva, Lainey Visscher, and Sophie Cattermole to win the 400 free relay in 3:25.57, with all four women splitting 51s. The Cardinals ‘B’ relay was just a half second behind, again with all four legs (Annette Schultz, Casey Fanz, Avery Braunecker, and and Nastja Govejsek) splitting 51s.

Freshman Brooke Atkins leading Xavier in scoring with 3rd place finishes in the 100 bak and 200 IM, along with a 5th place finish in the 200 back.

Just as on the women’s side, the Cardinal men topped Xavier, winning 177-81, despite a few exhibitioned swims and the Louisville All-Americans not competing in their main events.

The Cardinals swept the top three spots the 200 medley relay, with the ‘C’ and ‘A’ relays finishing within 0.26s of each other. Breaststroker Evgenii Somov swam fly on 2nd-place ‘A’ relay, splitting a 21.37, just a bit slower than All-American flyer Nick Albiero‘s 21.28 on the winning ‘B’ relay.

Junior worlds medalist Ilia Sibirtsev had a quiet meet in his first competition as a Cardinal, placing 5th in the 1000 free (9:36.91) and going 4:48.67 in the 500 free. The Cardinals’ other new international swimmer, Haridi Sameh, the Egyptian national record in the 50 fly (LCM), did not appear at all.

LOUISVILLE, Ky. – The University of Louisville men’s and women’s swimming and diving teams swept Xavier in the opening meet of the season, marking the third-straight year the Cardinals have won their home opener. The UofL women won 194-62 and the men posted a 177-81 victory over the Musketeers.

“We’re glad to get back to racing, and I think we saw a lot of different things,” said head coach Arthur Albiero. “It’s been a tough week, so it’s just part of the progression, and now we continue to work on the little things. It’s a good way to get back and it was a great crowd today, so it was fun.”

Christiana Regenauer won the women’s 50 freestyle in 23.51 in her first meet as a Cardinal, just out-touching Lainey Visscher (23.56) and Avery Braunecker (23.76). Visscher later sprinted to first in the women’s 100 freestyle with a final time of 51.53, slightly ahead of runner-up Regenauer (51.56).

Huh, looks like Louisville also picked up D2 100 breast champ Sasha Palazzo for his senior season. That’s a pretty good get, a 52 100 breaststroker.