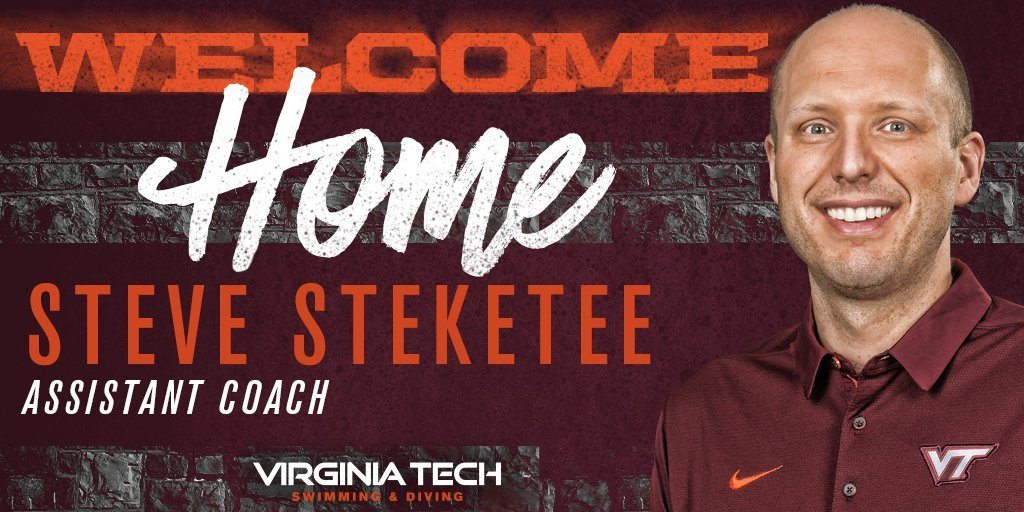 Newly minted Virginia Tech head coach Sergio Lopez has made his first coaching hire – tabbing Steve Steketee as an assistant coach. He will join fellow assistant and recruiting coordinator Josh Huger, who has been on staff since the fall of 2015.

“I am truly excited to have Steve Steketee become a part of the Virginia Tech Swimming & Diving coaching staff,” said Lopez Miro. “I have known Steve for almost 20 years, first as a swimmer when I was one of his coaches during his senior year at Northwestern University, and after as a colleague. Steve and I had the opportunity to work together at West Virginia University and build a team in less than three years that won Big East Championship and was Top 20 in the country. I felt fortunate when he expressed interest in coming to Blacksburg so we could work together again. Steve is a very intelligent and smart coach and a top recruiter, he will work relentlessly for the team, the student-athletes and Virginia Tech. I am so happy to welcome he and his wife Abby to the Hokie Family and to swimming and diving coaching staff.”

Steketee, who was most recently serving as a volunteer assistant on his wife Abby Steketee‘s Northwestern staff until she resigned in April, will reunite with Lopez after serving as an assistant on his West Virginia staff from 2004-2007. In that timespan, the duo catapulted the Mountaineer women from 11th to 3rd in the Big East while taking the men from 7th to 1st – including a top-20 NCAA finish for the men in 2007.

“I am very excited to join Sergio Lopez Miro’s staff as he builds something special with Virginia Tech Swimming and Diving,” said Steketee. “I feel honored that Coach Lopez Miro and the administration have given me this opportunity and I cannot wait to get to work!”

Prior to Northwestern, Steketee was an assistant at Nevada – also with his wife Abby – for 1 year during the 2014 season and for 5 years at South Carolina from 2008-2013. Abby joined that Gamecock staff during the 2009 season and continued with Steve until they made the move to Nevada.

Great hire for Sergio. They had a spectacular run at West Virginia so expect things to happen fast at Virginia Tech.