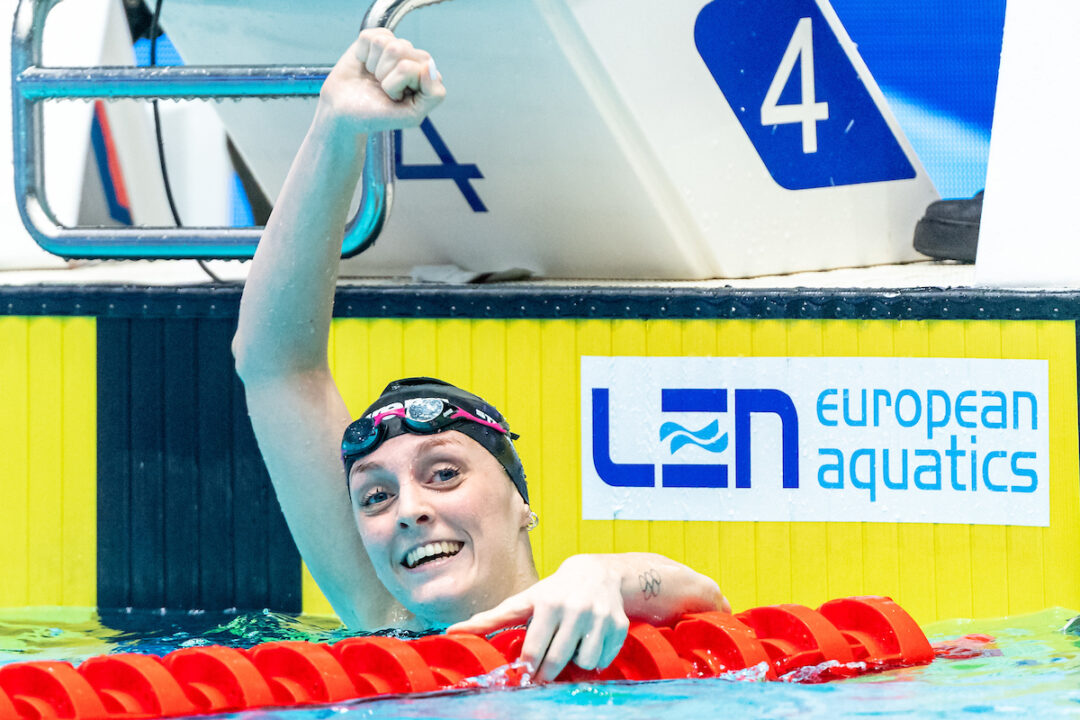 A day after swimming the fastest split in the women's 4x200 free relay, Steenbergen helped the Dutch the mixed medley relay. Archive photo via Giorgio Scala

In the mixed medley relay at the 2022 European Championships, Kira Toussaint, Arno Kamminga, Nyls Korstanje, and Marrit Steenbergen of the Netherlands won in a time of 3:41.73, just a few tenths off the 3:41.54 that they put up to win bronze at the World Championships earlier this year.

Powered by an incredible front half, Italy was leading at the halfway mark by over two seconds. However, Korstanje narrowed that gap to 0.04 seconds after his fly leg, and Steenbergen anchored in a blistering 52.33 split to help the Dutch win by 1.88 seconds.

Greece’s Apostolos Christou was leading at the 50-meter mark, but Thomas Ceccon came back in 27.01 to overtake him. Ceccon’s 52.82 was well off his world record time of 51.60, but it was fast enough to beat out the rest of his competition and put Italy in the lead.

Kira Toussaint was the fastest female backstroker, with her time of 59.49 making her the only woman under a minute. She was faster than the 59.72 she led off in at World Championships.

Around an hour after he tied his Italian record time of 58.26 in the individual 100 breast, Nicolo Martinenghi went on to drop a 58.13 split in the mixed medley relay and extend Italy’s lead even more. Arno Kamminga came off that same 100 breast final, where he was well off his best and went 59.68 to finish seventh. He later split 59.19 on the relay, which was good enough make him the second-fastest breaststroker in the field. However, he was nearly a second slower than the 58.28 he split at Worlds.

Every single country opted to go for a male breaststroker.

Nyls Korstanje had a massive swim today, dropping a 50.72 butterfly leg to cut Italy’s lead by two seconds. He was 0.27 faster than his Worlds split time of 50.99, and the only swimmer in the field underneath the 51-second mark. Great Britain’s Jacob Peters split 51.84, which is rather impressive considering how many relays he had to swim at both the World Championships and Commonwealth Games.

On the women’s side, it was Marie Wattel who had the fastest fly time. Her 57.57 is over a second slower than her flat start best time of 56.14, although she did have to swim a 50 fly semi-final in the same session as this relay.

Just a day after running down Great Britain and splitting 1:56.26 to help the Dutch win the women’s 4×200 free relay, Marrit Steenbergen did it again. This time, she overtook Italy with a 52.33 freestyle split, which was the fastest time for a woman by over a second. She did something similar in the mixed medley relay at Worlds, splitting 52.55 to bring the Dutch from fifth to third place. After multiple 52-point relay splits this year, it’s safe to say that Steenbergen is one of the strongest relay swimmers in the world.

Earlier today, Steenbergen won gold in the individual 100 free, clocking a time of 53.24.

Anna Hopkin had a strong 53.34 anchor, which brought Great Britain from fourth to third place.

The lone male anchor was France’s Charles Rihoux, who split 48.13 to move his country up into sixth place.

Watch out for marrit, she is only 22