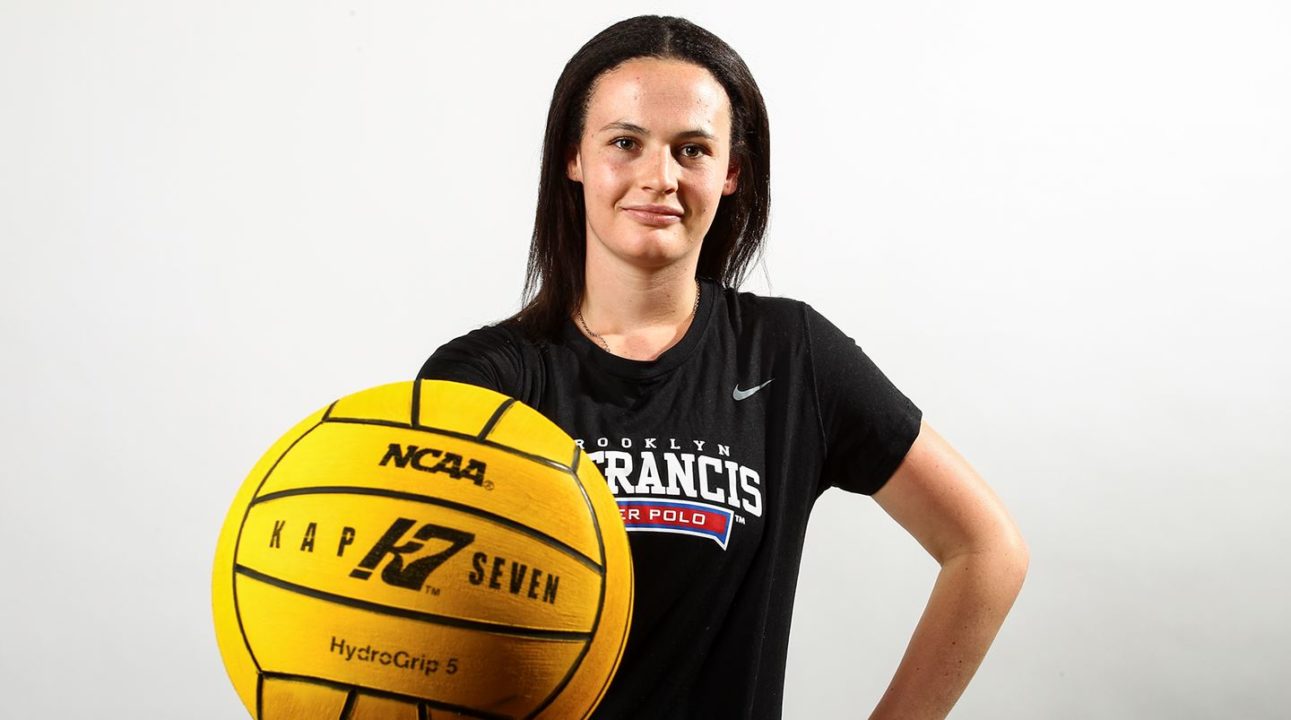 Including 20 performances of four or more scores, here is a look at some of the standout efforts of collegiate water polo Week 6 and conference player of the week honorees. Current photo via St. Francis Brooklyn Athletics

Including 20 performances of four or more scores, here is a look at some of the standout efforts of collegiate water polo Week 6 and conference player of the week honorees.

Siena’s Georgia Vargas netted a career-high six goals in a 15-5 win over Occidental on Saturday morning, while Diana Fernandez added four goals and three assists. Sara Lopez and Bianca Prinsloo chipped in four goals apiece and Daniella Fuertes added a hat trick in an 18-6 victory over Cal Tech to wrap up the team’s stay at the Claremont Convergence tournament. Fernandez also registered hat tricks in a 12-6 win over Redlands on Thursday and in a 9-8 double overtime win over Fresno Pacific on Friday. Sophia Torres deposited three goals in the Saints’ 13-8 loss to Whittier on Friday.

VMI’s McKenna Imset netted five goals in a 13-6 win over Occidental on Friday night. Sarah Dolitsky matched the feat with a five-bagger in the Keydets’ 16-10 win over LaVerne on Saturday. Makenna Moore added a hat trick in the latter victory.

Harvard’s Quinne Pursell put in five goals and Sofia Carrera-Justiz added a hat trick as the #15 Crimson were edged by #11 UC Davis 11-10 on Sunday.

UC Santa Barbara’s Sarah Snyder scored nine goals for the Gauchos on Saturday, notching five goals in a 15-6 win over Azusa Pacific and four scores earlier in the day in a 12-9 victory over Pomona-Pitzer. Mollie Simmons followed with three goals in the win over Pomona-Pitzer, while Kate Pipkin and Amanda Legaspi scored hat tricks in the night cap.

Indiana’s Izzy Mandema turned in 12 goals on the week, tacked on four goals in the team’s 13-7 victory over Mercyhurst on Saturday morning, while adding hat tricks against Cal State East Bay (W 8-6) and #23 Cal State Northridge (L 11-10). Tina Doherty paced the Hoosiers with four goals in the team’s 14-9 win over Salem on Friday, while Hannah Falls-Hand scored a hat trick against Mercyhurst.

Salem’s Margherita Garibbo put in four goals in an 11-5 win over Mercyhurst.

UC Davis – Annie Kutt and Noelle Wijnbelt each scored three times in the Aggies’ 12-8 victory over RV Brown on Saturday. Emily Byrne added a hat trick in the team’s 11-10 win over #15 Harvard on Sunday.

Loyola Marymount – Melyssa Moore scored three goals within a minute and a half to open the second quarter of the Lions’ 15-6 victory over Sonoma State on Saturday.

Brown – Katie Klein notched a hat trick in the Bears’ 1-5 win over Gannon to close out the Harvard Invitational on Sunday.

Michigan – Julia Sellers netted five goals in a 20-8 win over #13 Fresno State; tacked on four goals in a 16-9 victory over #15 Long Beach State and notched a hat trick in the #7 Wolverines’ upset win over #6 Pacific.

Player of the Week: Katia Andon-Mateos, Cal State Northridge – scored 10 goals at the Indiana Classic; scored at least one goal in all four of the team’s matches; tallied a season-high five goals in an 11-10 upset win over #20 Indiana, while adding two assists; put in two goals each as the Matadors fell to #15 Wagner (11-10) and topped Cal State East Bay (11-9);

Player of the Week: Julia Sellers, Michigan – registered 13 goals, two assists, four steals and a field block as the team went 4-0 at home during the Wolverine Invitational, including an upset win over #6 Pacific (11-5); tallied a goal and a steal in a 10-5 win over #14 UC San Diego; notched a hat trick and two steals in the win over Pacific; put in five goals against #13 Fresno State (W 20-8) and four scores in a 16-9 win over #15 Long Beach State; logged four steals, a blocked shot and two drawn exclusions, while also winning six of seven sprint attempts on the weekend.

Defensive Player of the Week: Marissa Webb, Princeton – posted 35 saves in three games at the Harvard Invitational; stopped 10 shots as the Tigers upset #15 Harvard 7-6 in overtime; notched 11 saves in a 9-8 loss to #11 UC Davis; finished the weekend with a 14-save effort in an 11-10 overtime win over #24 Cal Baptist

Player of the Week: Callie Woodruff, Fresno State – led team with 13 points, including 12 goals as the Bulldogs topped #17 Long Beach State, #21 Marist and Saint Francis (PA); added five drawn exclusions and two steals; notched a pair of hat tricks and tied her season best with four scores in the win over Marist.

Defensive Player of the Week: Isabel French, VMI – made 38 saves with a 55 percent save percentage in four games at the Claremont Convergence tournament; notched three steals.

Rookie of the Week: McKenna Imset, VMI – scored 12 goals with seven drawn exclusions and one assist at the Claremont Convergence tournament; put in five goals in the Keydets’ 13-6 win over Occidental.

Player of the Week: Maddie Musselman, UCLA – scored both of game-high two goals in the second half of the team’s 9-7 win over #3 Cal; added three drawn exclusions, three field blocks and one steal.

Newcomer of the Week: Olga Descalzi Portell, San Jose State – scored career high five goals on just six shots and was credited with two assists in the Spartans’ 11-7 win over Santa Clara; became the first Spartan freshman since 2014 to net five goals in multiple games in a season

Offensive Athlete of the Week: Anastacia Gonzalez, Whittier – helped the Poets to wins over Siena (12-8), McKendree (13-7) and St. Francis Brooklyn (12-8); notched 10 goals and six assists in four games; scored four goals in the win over McKendree and added a three goals and two assists in a 15-11 loss to Cal State Monterey Bay.

Defensive Athlete of the Week: Hunter Olivier, Redlands – tallied 10 steals and three exclusions drawn as the Redlands went 3-3 on the week; notched five steals and one drawn exclusion in 7-5 win over McKendree; tallied a field block against Siena; posted seven goals and one assist on the week.