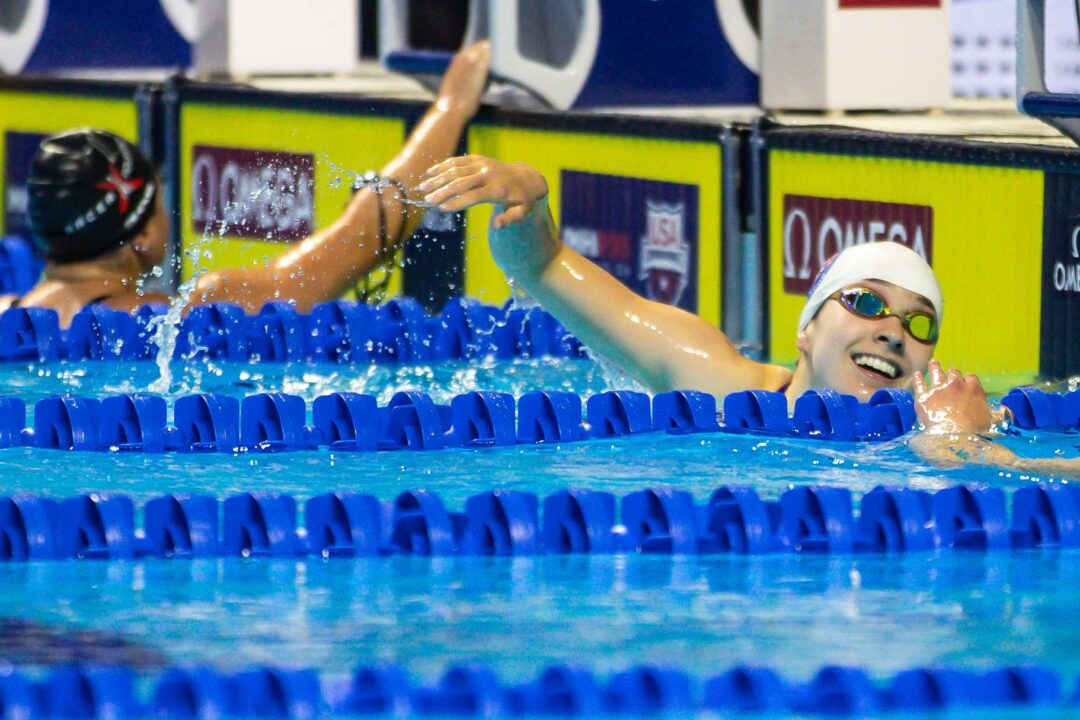 16 year-old Camille Spink of Nation’s Capital Swim Club  and 15-year-old Anna Moesch of Streamline Aquatics Club brought the first 2nd place tie at the U.S. Olympic Trials Wave I during the 50 free final. They touched the wall at 25.54.

In Wave II, the top two of each event get to move on to Wave II next week. So there was some uncertainty in the air when the two tied for second place, but now we know that 1st place finisher Missy Cundiff of Tribe Aquatics (25.46), Spink and Moesch will all get second swims in Wave II.

Their times rank them #24 out of the all-time fastest 15-16 year-olds in the event. Both of their lifetime best times were only 9 hours old as Spink set hers at 25.63 during prelims to snag the 3rd spot in tonight’s final and Moesch posted a 25.68 to claim the 6th spot.

With this swim, they have surpassed Olympic star Dara Torres‘ 15-16 rank. The two are only .02 behind the 15-16 ranks of both Cal grad Katie McLaughlin and three-time Olympian Amanda Weir.

Spink’s lifetime best time going into this meet was 25.86, which she swam in early May at the 18&Under Spring Cup in Richmond. Moesch swam her previous best time in February; she posted a 25.83.

Spink has been dominating the sprint freestyle races this weekend. She won the 100 free final on Friday with a lifetime best time of 55.25, the 12th all-time fastest 100 meter free posted by a 15-16 year-old.

Kind of amazing that Dara Torres is still that high in the ranks. She swam that time close to 40 years ago. Think how much has changed in swimming in that time, and she’s still on the list.

I get here it makes sense to just send all three, especially because spink made the 100. Idk if this has happened before but say next week there’s a tie for second? What happens? Swim off?