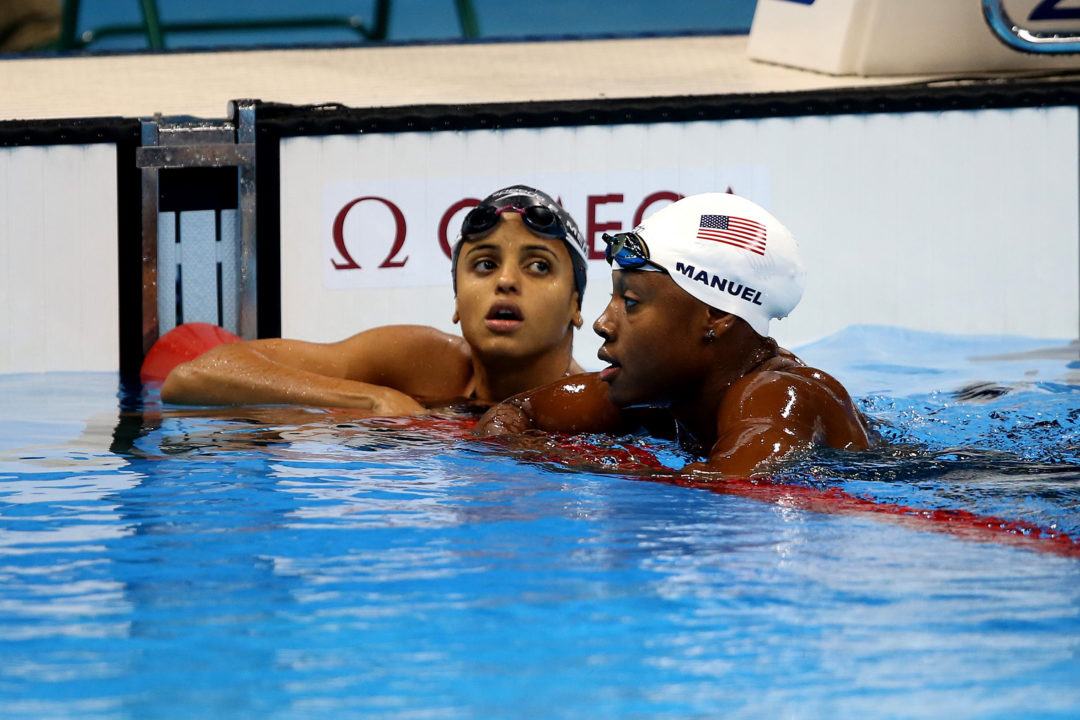 The only Summer Olympics host nation to fail to medal in pool swimming this century was Greece, 12 years ago.

Bruno Fratus failed to medal in the 50 free tonight, but after a dramatic night (what else to expect from these Games), Brazil might still have a shot at the podium tomorrow night. During the last session of competition.

That shot is Etiene Medeiros. But things weren’t easy for Brazil‘s top female sprinter tonight, nor were they for this entire week. Actually, her problems started before the Olympics started.

She failed a doping test earlier this summer, testing positive for an asthma medication without a therapeutic use exemption (TUE) to rectify the positive test. It looked as though she might face a ban which would cost her the chance to swim at the Olympics. She could breathe easy, if only temporarily, when she was finally cleared of her doping charge.

In the 100 back, where she became the first Brazilian under the minute barrier last summer, she finished 25th in prelims with a sordid 1:01.70. That time was well off of her best. She squeaked into the semifinals of the 100 free in 14th, seeming to bounce back from her poor 100 back performance, only to touch 16th in the semifinals.

The 50 free, then, would be her last shot at finaling and at making the podium. It figured, that in the prelims, Medeiros posted the 16th-best time. Just. Squeaking. By. And then, before tonight’s semis, she was panicked.

It was announced in the pool during finals tonight that there was a delay, and later it was discovered that Medeiros’ bus to the pool had, allegedly, actually been on the way to the track & field stadium. Whoops.

She made it back to the pool, though, and she was definitely ready to compete. Saving her best for last, Medeiros blasted a 24.45 to break the national record by exactly one tenth, finishing 7th, and making it to the finals. The huge boom from the Brazilian crowd confirmed that she had earned a spot in the final.

Medeiros is Brazil‘s last real shot at a podium finish, and keeps Brazil‘s hopes alive. The national record holder, too, is pushing the boundaries for women in Brazilian sport. They have never been remotely as strong as their men, but with names like Medeiros leading their top athletes, the women will continue trailblazing in Brazil.

No South American medals yet.

Amazing this cheater is competing!!! Just because she is from Brazil the host nation. Otherwise if there was no political interest in between she would be at least suspended for 6 months. Sad very sad.