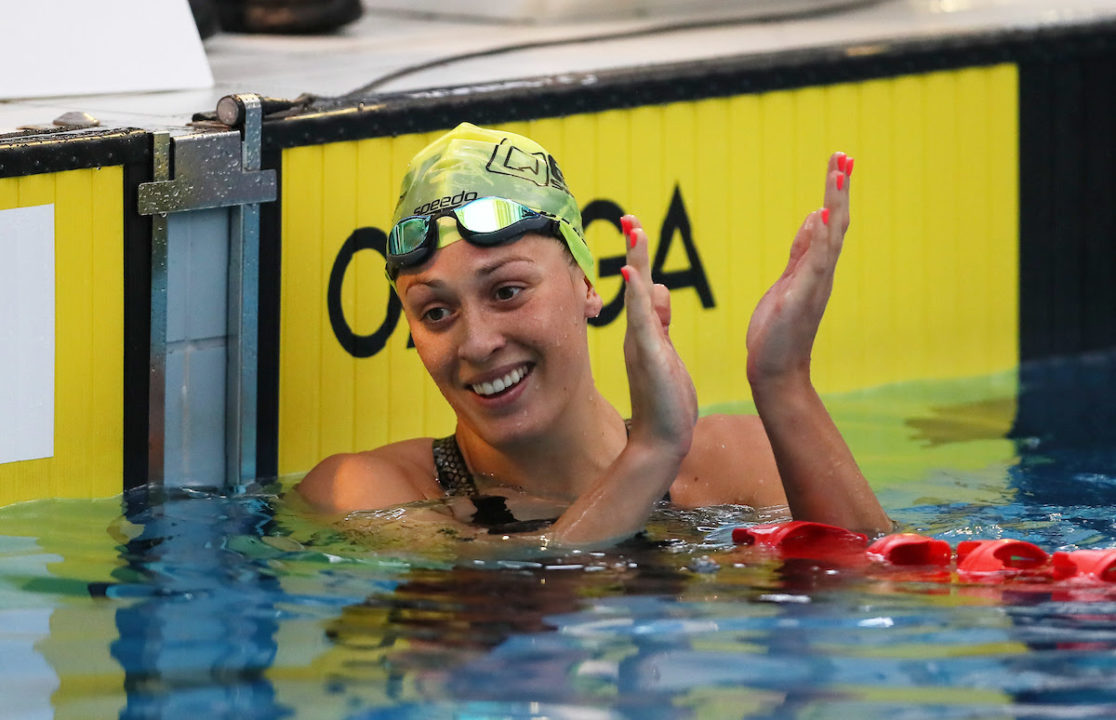 Paralympic star Sophie Pascoe made a comeback to competitive swimming earlier this year as she competed at New Zealand’s para-swimming open meet. Throughout the meet, Pascoe broke three world records in the S9 class. On day one she set new World Records for both the 50 free (27.32 compared to her prior 27.69) and the 100 back (1:07.41) in the S9 class, all in a timeframe of twenty minutes. Lastly, she set a new world record in the 100-meter freestyle in a time of 59.77, becoming the first female S9 swimmer to break the minute barrier in the 100-meter freestyle.

Prior to this meet, the world-record times were as follows:

Before the New Zealand Open, Pascoe’s lifetime bests in these events were the following:

Since her performance at last year’s Para Pan-Pacs, the New Zealand native had been absent from high-level international competition as a result of some surgical procedures.

Pascoe, as stated on her social media post above, had her fibula along with the main nerve removed in an effort to help reduce her pain.

As a result of this surgical procedure, Pascoe joined the ongoing saga of reclassified para-swimmers.

A few weeks ago, we reported that Brazil’s para-swimming ace Andre Brasil had been declassified. Brasil is one of several para-swimmers who have gone through reclassification as a result of the changing to para-swimming classification standards that started scarcely one year ago. This means that Andre Brasil is no longer able to compete in any meets sanctioned by the Brazilian Paralympic Committee nor the International Paralympic Committee.

One further example is Alice Tai. In a span of three years, Tai has been classed down from an S10 to an S9, and from there to an S8. A few days ago, we reported that Tai won the World Series title after breaking several world records in her class.

As we approach the Olympic year, we may see further para-swimmers go through the classification process, which as a side effect may alter both the current world rankings and world records.

Pascoe was re-classified months ago … seems like strange timing to now try and embroil her in the classification scandal. Many have questioned over the years as to why she was classified as an S10 and wasn’t an S9 – look at the back of her right calf, which is severely scarred as well as her amputated lower left leg.

There is no scandal. She is in the wrong class. It is a classification mistake made by inept classifiers that have created an unfair advantage for her.

Are you saying her powerful flip turns and kick are affected by scar tissue?

Legs are somewhat overrated in swimming, Look instead at the arm span, shoulder flexibility, power and hands. Pascoe has what is needed to be a balanced, efficient and powerful swimmer. That’s the advantage. Very powerful in the water. Beautiful swimmer, has to be said, just wrong class.

Paige Leonhardt straight back in pool competing as s14 after being classed NE. System really needs a shake up.

wow! Commonwealth Games 100breast Silver Medalist just pipped by Pascoe? She’s listed as a swimmer with Cerebral Palsy .. did that fix itself? The IPC need to get a handle on the massive problems within Swimming. Start with kicking some of them out, like Patterson and Leonhardt. This moving classes is ridiculous and not solving anything. There should be zero tolerance on classification cheating, it’s just like doping. Why should swimmers have to compete against swimmers known to cheat the system?

Once again brilliantly stated CONFUSED, 17 days later from your comments Leonhardt has now broken 3 x S14 Short course world records, what a joke. Furthermore, what was she doing in the S10 Category in the first place??? To be classified as NE and then then thrown out of the S10 category, states the medical evidence was extremely poor, furthermore, swimming Australia did not want to appeal the decision. Maybe swimming Australia know the real truth about Leonhardt’s alleged disabilities and did NOT want to support the swimmer, in appealing the International Classifiers decision. People need to be sacked for bringing the beautiful sport of Para-swimming into disrepute!!!

Bit more on Leonhardt. On the Australian Paralympic website her impairment is listed as Cerebral Palsy and is padded out with the following ‘When Paige Leonhardt was five years old, she was in a car accident in which she was thrown from the car. Her injuries from the accident were severe, requiring four years of recovery with spinal taps, MRIs and operations to remove fluid from her brain. She had haemorrages behind the eyes and now suffers from drusens, yellow deposits under the retinas. She continues to suffer hemiplegia on her right side as well as intacraneal hypertension, epilepsy and autism.’ So now someone claiming CP, vision impaired and Autism competes, very successfully, in the Intellectually Disabled class? Gotta feel… Read more »

Leonhardt originally swam nationally as an S14. She went after a 10 class after, what I heard, she was “coached” on how to do it. She has claimed she acquired cerebral palsy from the car accident which we all know is hog wash. She is going for international S14 at the competition at the end of the year. Watch her try and get her S10 class back. I’m wondering if Australia have any honest swimmers left

Interesting that you should mention Leonhardt being coached. The author of this article also claims that Australian coaches are involved. Seems to be quite the racket going on.
Aussie Para Swimmer Ashleigh Cockburn: IM ‘Not Only Accepted But Expected’
https://swimswam.com/aussie-para-swimmer-ashleigh-cockburn-im-not-only-accepted-but-expected/

SARA you are 90% correct in your assertions, apart from if Australia have any honest swimmers left. Please remember that 97% of all Para-swimmers around the world, are ethical, honest, hard working and moral athletes. Sadly it’s the remaining 3% that are the IM cheats and frauds. Until World Para-swimming resets its moral compass, and goes after these three percenters, sadly the beautiful sport of Para-swimming is going to be permanently damaged.

It’s too stupid now. Between NZL Pascoe & AUS Patterson the S9 class joins the S8 class for controversy & stupidity. Swimmers with major upper limb disabilities (just below elbow amputees for example) have no chance.
Sophie Pascoe – Stroke of Fate
‘Everyone who competes at the Paralympics has to meet the classification criteria. But I find it hard to accept when it isn’t obvious what is wrong with you.’
‘Applying to be reclassified is a catch-22 for me. I’m still at the top of the S10 grade if I went down to an S9 it could be too easy.’
‘At any major IPC race you can look across at your competition in 4 of the… Read more »

They have reduced the sport to a swim exhibition instead of a competition. That is how it should be viewed now its a shame the countries are naming national teams and awarding athlete stipends based upon this system.

Sadly, I agree. You can’t fix stupid. Good luck to Ch4 explaining to viewers what’s going on in the pool come September. If Pascoe noted that ‘stragglers’, perhaps to use kinder words her competition or fellow athletes doing their best touched 5s after her in the S10 class what is she expecting in the S9 class?

Thought she broke the 100 fly record as well