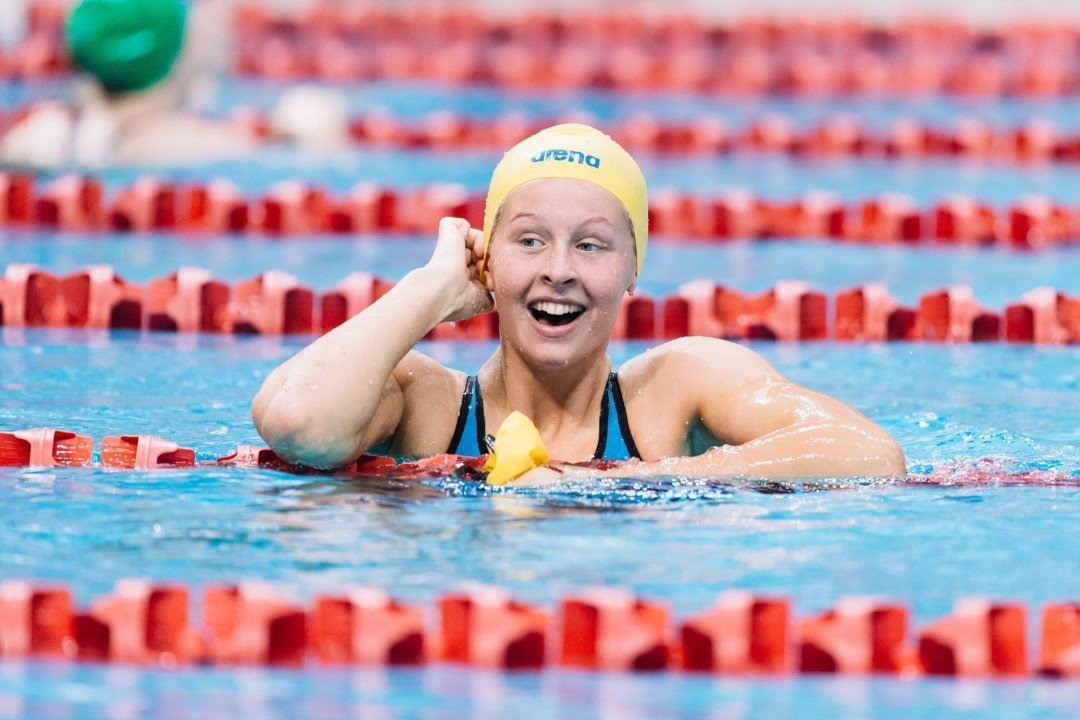 he Swedish breaststroker posted a lifetime best as she's making her way through her first yards season, going 58.60 this morning in the 100 breast. Archive photo via Adrian Seetho/Singapore Swimming Association

The big swim on the women’s side came from Sophie Hansson, a freshman from NC State. The Swedish breaststroker posted a lifetime best as she’s making her way through her first yards season, going 58.60 this morning in the 100 breast. IU freshman Noelle Peplowski was 2nd with a PR 59.18, ahead of Lilly King‘s 59.66 and Louisville’s Mariia Astashkina (59.87). King was likely just cruising — she was 56.33 on their 400 medley last night.

NC State took two more top seeds this morning. In the 400 IM, Makayla Sargent broke 4:10 for the first time, going 4:09.57 for the fastest time by nearly two seconds. Sargent had a huge summer, going 4:40.24 in long course to take 6th at Nationals, so look for her to be an A final candidate in this event come March. Wolfpack senior Elise Haan was 51.55 for a lights-out swim in the 100 back. No other swimmer finished under 53.0.

In the 200 free, notably, NC State had zero swimmers make the A final, though none of the three returners from last year’s NCAA title-winning 800 free relay were entered in the event. Nyls Korstanje was 1:36.23 for 9th as their top finisher. Indiana’s Zach Apple was 1:34.12, a full second ahead of 2nd place Grant House of ASU (1:35.27).

Looks like the NCState women have found the missing breaststroke link they needed last year.

Now the men just need to develop some top end breast speed. Hopefully Graber can get there come February /March!

The Swedes are taking over hehe

With a budding breaststroker and Michelle Coleman swimming a National record 56+ SCM backstroke today, they may join Louise Hansen (Fly/free) and Sara Sjostrom (Free/Fly) to take a premier role in the 400 MR on the world stage.