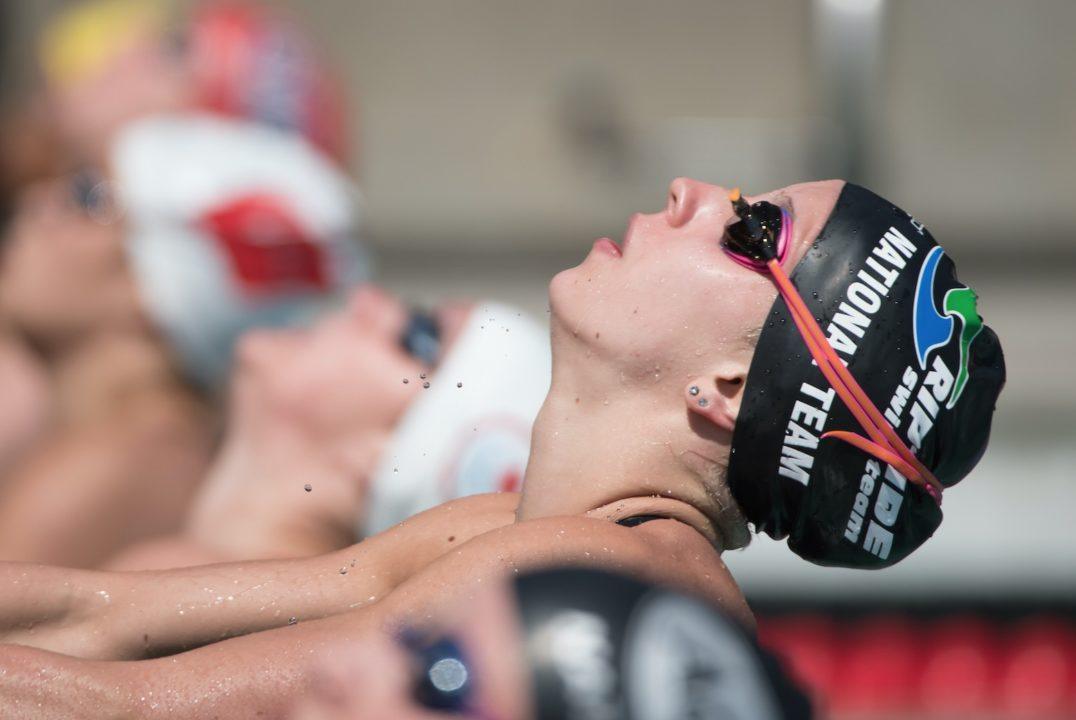 In her one and only event of the day, 17-year-old Regan Smith delivered a new World Junior Record in the prelims of the women’s 100 meter backstroke in a time of 58.55. The previous record of 58.82 was set by Smith at the recent Bloomington leg of the 2019 Pro Swim Series in May.

Now the 9th-fastest performer all-time, Smith is a mere 0.22 away from Missy Franklin‘s National Age Group (NAG) Record of 58.33, set at the 2012 London Olympics by then-17-year-old Franklin. Smith’s time, though not quite as fast as Franklin’s, is considered the Junior World Record as only times from 2014 and later are eligible for that distinction.

Now, Smith is tied with Canadian Taylor Ruck as the 2nd-fastest performer in the world this year behind former World Record Holder Kylie Masse.

With Smith focusing exclusively on the 100 backstroke today, the 200 butterfly is up for grabs. Leading the way into tonight’s final is Carmel Swim Club’s Kelly Pash with a 2:13.34, her 2nd-fastest performance ever in the event, and less than 2 seconds shy of her best time. Behind Pash sits Louisville’s Alena Kraus with a 2:13.84, only about 1.1 seconds off of her lifetime best from March of 2018.

Purdue’s Jinq En Phee, who represents Malaysia internationally, posted the top time in the 100 breast with a 1:09.71, just ahead of Indiana University commit Emily Weiss, who boasts a ridiculously fast 58.40 lifetime best in yards. World Record holder Lilly King made her first appearance of the weekend in the prelims of the 100 breast this morning, posting a modest 1:09.78 to take the 3rd seed in finals, where she will make it a race for second. In her pro debut at the Bloomington stop of the PSS in May, King posted a 1:05.68 in the 100 breast.

Cody Miller made a similar appearance in the heats of the men’s 100 breast, posting a 1:01.70 to take the top seed. Miller is followed by SCY American Record holder Ian Finnerty, who posted a 1:02.35 for the 2nd position going into finals. Miller recently posted impressive times of 59.24 at the Bloomington stop of the Pro Swim Series last month. Miller also put up a 2:08.98 in the 200 breast in Bloomington.

Michigan’s Tommy Cope leads a very Wolverine-heavy final in the men’s 200 IM, where he will race alongside teammates Robert Zofchak, Miles Smachlo, and 400 IM/200 breast champ Charlie Swanson in the ‘A’ final.

Smachlo, meanwhile, leads the men’s 200 fly with the only sub-2:00 performance of the morning in 1:59.33, which is less than two seconds off his best time of 1:57.64 from 2017. Smachlo will have to fend off Louisville’s Nicolas Albiero and Pan Pacs bronze medalist Zach Harting, who has the fastest best time in field with a 1:55.05.

Grigory Tarasevich leads the men’s 100 backstroke with a 54.57 to Gabriel Fantoni‘s 54.98. Together, they were the only men sub-55 in the backstroke this morning.

Has anyone tracked how many times she’s broken the WJR I’m this event? It seems like since August 2017 she sets a new record half the time she swims the 100 back

*Luca Urlando has entered the chat*

But by all means congrats to Regan!

Yep…someone who could medal will be sitting on the sideline

Below was my comment regarding couple events at Aussie trials… Certainly applies for USA women’s backstroke amongst other events, a 58 100 back needs to be at swimming’s highest level meets regardless of country limits… Don’t see the 3rd best American tennis player at home from their top events…

“FINA needs an “A+” or other measure to allow a 3rd swimmer per country should they be a medal threat, ie top 8 standard. As it is the ‘world champs’ and swimming is growing it’s professional status every year, there’s no way a 52 sec 100 Freestyler or 24.2 50 Freestyler should not be competing. The flood gates on this would not open with mass numbers, only a couple of world… Read more »

With regards to the tennis reference, there are many more opportunities for medals in swimming than in tennis, and roster sizes are infinitely larger for each country’s contingent at an international competition for swimming compared to tennis. It is a shame that there are so many talented 100 backstrokers, but there are two more backstroke events and three additional strokes for qualifiers at an international meet.

Agreed with that in terms of specific opportunities, I’m referring more to the general professionalism in sport and the way swimming needs to go. Limiting a top 5-8 or so swimmer from competing in the highest competitive stage is a small solution on the idea of the ‘best in the world’ at a world champs etc.

do you even read?

The US will have three options to lead off the medley relay in Korea next month.

Let the politics start for the prelim spot. I say Smith is out

Coaches decision, the default would be the fastest swimmer in the 100 individual race. So it looks like she is out unless both Smoliga and Baker can do no better than 58.5. I think I am correct that todays time would probably need to be beat or Smith would be a possibility. Also the mixed relay could be a possibility cause we want dressel on butterly though Lily King is probably first in line over a female backstroker.

in b4 WR predictions. Yes she’s fast, but expectations don’t help. They’re just for you to feel dopamine rush.