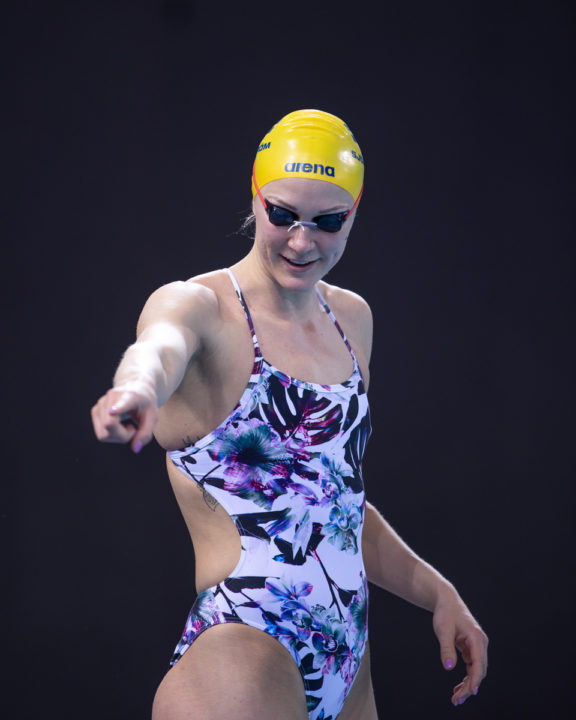 Swedish speedster Sarah Sjostrom did her thing yet again in Malmö, putting up her 2nd best 100m fly time of the season at Nats. Archive photo via “Rafael/Domeyko Photography”

As a warning shot to would-be competitors vying for 100m fly gold at next month’s World Championships, Olympic champion Sarah Sjostrom produced her 2nd fastest mark of the season to take her 3rd title at these Swedish Championships.

The 25-year-old holds the fastest 100m fly time in the world for 2019 with the 56.42 she threw down at the FINA Champions Series stop in Indianapolis this past May.

She came within range of that mark here in Malmö in the morning heats, taking the top seed easily in 57.61. Come tonight’s final, however, the Swede took things up another octane level to split 26.38/30.07 and crank out a winning effort of 56.45.

Tonight’s outing represents Sjostrom’s 5th sub-57 100 fly of 2019 alone, with only Australian Emma McKeon having ventured into 56-second territory this year, sitting as the #2 swimmer behind Sjostrom in a time of 56.85 from Aussie Nationals.

Sjostrom’s other 2 medals here thus far came in the 200m free and 50m back last night.

Taking 2 titles of his own tonight amid Sjostrom’s showstopper was Samuel Tornqvist, the 22-year-old who nailed 400m IM and 100m back gold this evening.

In the former event, Tornqvist put up the 2nd fastest time of his career to land atop the podium in 4:25.00. That sits 2nd on his own all-time performances list to the 4:23.13 PB he produced at last year’s Swedish Championships.

The 100m back did see Tornqvist pump out a personal best, hitting the wall in a time of 56.45. Not only did he take gold tonight by over a second, but he shaved .03 off of his previous lifetime beast of 56.48 logged just this year at the Pro Swim Series in Richmond. Both marks represent his only 2 outings under the 57-second threshold.

In the women’s 50m breast, Sophie Hansson got her hands on the wall first, taking the title in 31.22. She has already been as fast as 30.95 at the aforementioned Pro Swim Series in Richmond, a mark rendering the Swede 16th in the world this season.

Is it possible she peaked? She’s 25 now and we haven’t seen a WR from her in a couple of years.

I remember when a lot of people were saying Ledecky’s best years were behind her after Rio then she broke the WR in the 1500 last year. However, no one will bring that up with Sarah curious.

No, that would be Schooling.

She was a tenth off the world record in the 50 free today. Have a seat.