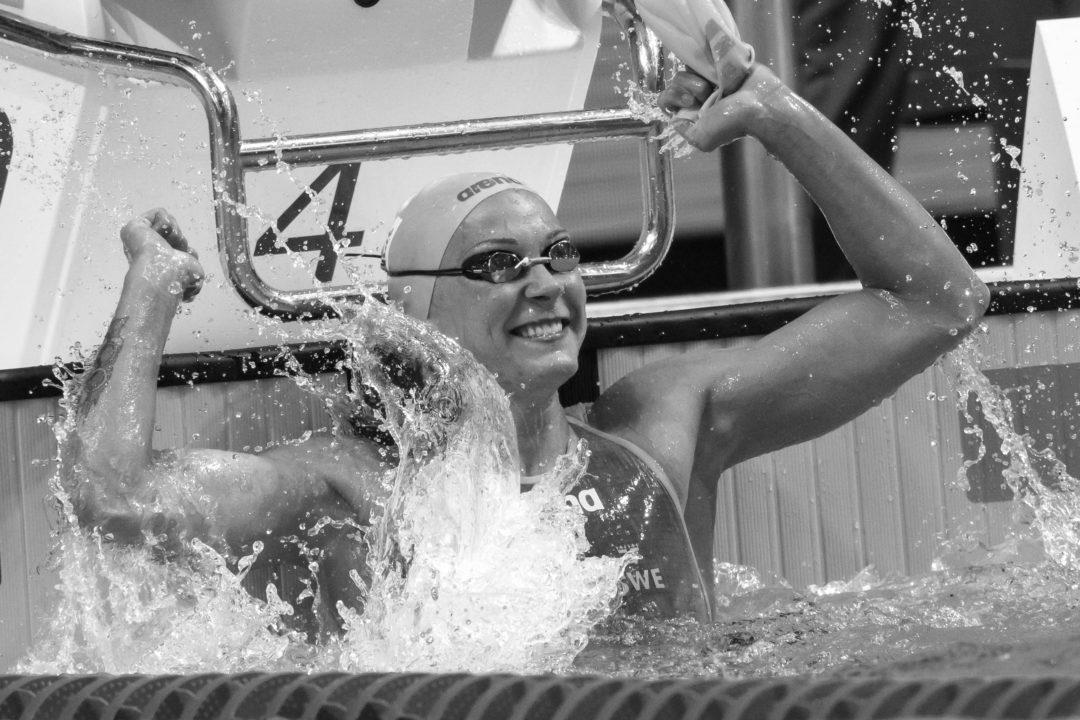 The high-profile athletes in attendance ruled the pool for a 2nd night in Beijing, as Sarah Sjostrom, Chad Le Clos, Vlad Morozov, Katinka Hosszu and others climbed on the podium at the ‘water cube’. Two World Junior Records highlighted the evening, bringing the total to 3 getting the ax over the 2-day stop, with one World Cup record also falling yesterday.

Russia’s Vladimir Morozov collected 2 wins on the night, beginning with the men’s 100m IM. The former USC sprinter fired off a super quick 50.36 to crush the field, although 18-year-old Michael Andrew of America made his own mark in the race for runner-up. Clocking 51.86, FINA indicated that Andrew earned a new World Junior Record, sneaking under the 51.93 ‘best time standard’ established by FINA when WJR were introduced.

However, Andrew has been faster, producing a 51.84 to win the world title at the 2016 FINA Short Course World Championships in Windsor. That mark should represent the WJR, but his swim tonight almost matching that was imressive for the Kansas native. He also threw down a personal best yesterday in the 400m IM, registering a time of 4:13.39 for 7th.

Finishing with the bronze in the race was yesterday’s World Cup Record-setter in the 400m IM, Daiya Seto of Japan, who notched a mark of 52.09 for 3rd tonight.

Morozov also got his hand on the wall first in the splash n’ dash, clocking 20.83 to represent the only swimmer of the field to delve into the sub-21 second territory. He and all others are still chasing the 20.26 World REcord set by France’s semi-retire Florent Manaudou from back in 2014.

A collection of the world’s fastest women in the history of swimming convened in the 100m freestyle final, as Cate Campbell, Ranomi Kromowdijojo, Pernille Blume, Bronte Cambpbell  and Sarah Sjostrom were all among the 8 racing for gold. Tonight it was Swedish superstar and world record holder Sjostrom who got the job done, stopping the clock in 51.25 to win over Cate Campbell‘s silver medal-garnering mark of 51.45.

Kromo was next in a speedy 51.91 to wrap up the top 3. 50m freestyle Olympic champion Blume of Denmark finished off the podium, but earned a respectable 52.59 for 5th, while Bronte notched 53.94 for 7th overall in the race.

A woman synonymous with World Cup racing, Katinka Hosszu of Hungary, earned her 3rd gold of the meet, wrangling in the win her signature 200m IM. Touching the wall in 2:04.64, Hosszu established herself once again as the IM dominator, winning by almost 2 solid seconds over 2nd place finisher Emily Seebohm of Australia, who touched in 2:06.62.

Hosszu already pocketed golds last night in the 100m backstroke and 100m IM to help fuel her charge against Sjostrom for overall World Cup point standings, although Sjostrom carries a big lead into this final cluster.

Sjostrom was another multiple-event winner to help her World Cup title and cluster bonus pursuits, doubling up on her 100m freestyle win with a gold in the 100m butterfly. The world record holder cranked out a solid 56.50 for the victory, well-off her own WR of 54.61, but enough to stand atop the podium here in Beijing. China’s Zhang Yufei settled for silver in 56.91, while Kromo added bronze to her haul in 57.18.

Of note, Korea’s budding female star Kim Seo Yeong took 4th  in 57.83, with her result checking in as a new Korean national record. Seo Yeong’s performance tonight overtook the previous standard of 58.40 set just this year at the Asian Indoor Games. This is the 3rd individual national record for Seo Yeong, as the 23-year-old already holds Korea’s records in the women’s 200m IM and 400m IM in long course meters.

Finally, 15-year-old Chinese athlete Wang Jianjiahe notched her 2nd World Junior Record of the Beijing stop, impressing the home crowd by lowering her own mark in the women’s 800m freestyle. She already held the WJR in 8:15.35 from the Doha stop of this year’s series, but the teen was able to shave off a handful of seconds to establish a new WJR of 8:12.30 tonight for gold.

But Sjöström isn’t the record holder – C1 is

That is the case but it may not yet have been formally ratified by FINA; so (officially) RK’s time remains the mark untl the paperwork is formally “rubber stamped”.

What about the American women who were there? How’d they do?

Lia Neal was OK in the 100 free, just behind Blume and some second after the best, but missed finals in the 50 free, 100IM and 100 fly. The young girls didn’t leave a mark, no finals.