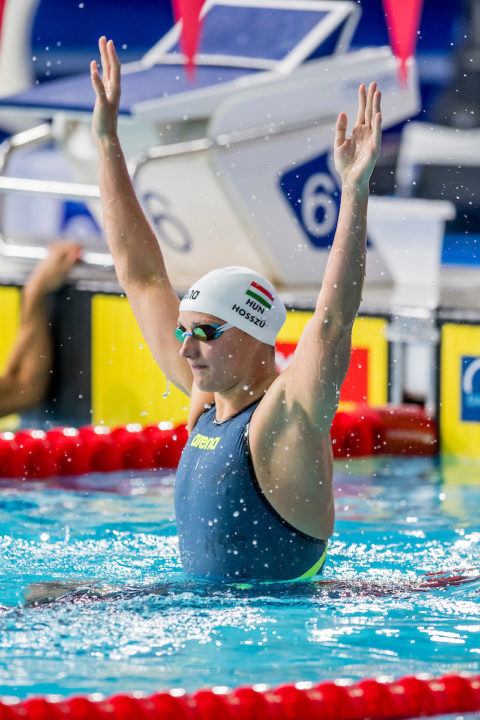 While we normally run World Cup point updates after each stop, the nailbiter of a points race between Sarah Sjostrom and Katinka Hosszu calls for a closer eye. Sjostrom led Hosszu by just 15 points with one stop to go, but that lead could* actually shrink to 12 after day 1 in Tokyo. Archive photo via Andrea Masini/ Deepbluemedia/Insidefoto

While we normally run World Cup point updates after each stop, the nailbiter of a points race between Sarah Sjostrom and Katinka Hosszu calls for a closer eye. Sjostrom led Hosszu by just 15 points with one stop to go, but that lead could actually shrink to 12 after day 1 in Tokyo, despite a big head-to-head win by Sjostrom.

On day 1, Sjostrom picked up two wins, while Hosszu earned one win and one silver medal. The 100 IM was a key race, with Sjostrom beating Hosszu head-to-head in what was essentially a six-point swing. Sjostrom now outscores Hosszu in medal points by 3, while Hosszu would have outscored Sjostrom by 3 had she won the 100 IM.

*Performance points aren’t official until all events have taken place.

It’s fairly likely the top 3 performance bonus times will be supplanted over the next two days. The top performance (Yulia Efimova‘s 200 breast) is only worth 967 FINA points, and the top performance times have averaged 983 points on the women’s side this series. The women’s 50 fly, in particular, tends to be a high-point event, with the top two performance bonuses in Tokyo coming from Kromowidjojo and Sjostrom in that event, which will take place on day 2 in Singapore.

This article very misleading. Today actually Hosszu kissed goodbye to overall win. After Efimova was better in 200BR than Hosszu in 100IM prelim race Hosszu will have most likely no bonus points in Singapore. Even if to assume that Sjostrom and Kromowidjojo don’t swim better than Hosszu’s 965 and don’t have any bonus points at all swimming worse than Atkinson, even then the only thing that Sjostrom needs to win overall is one more gold medal because she won 2 of them already today. Moreover Efimova opened the door for Ranomi to beat Hosszu in the third cluster winning with that $50,000. She will get this prize if she shows best performance at this stop and wins two gold medals… Read more »

Another swimmer could swim 965 which could in theory still give Hosszu 18 points and Sjostrom 0.

That’s about it though as Hosszu has not been in WR territory at any point this WC season.

If someone swims better than Sjostroms’s 964 keeping her out of bonus points then it will be 965 or higher. If it is higher than Hosszu’s 965 then Hosszu will have only 12 points advantage against Sjostrom should the later wins one more gold medal. It is not enough for Hosszu to win overall. If someone ties with Hosszu (965) then I would expect Hosszu to get (18+12)/2=15 points. That also won’t give Hosszu upright win. If nobody swims better 964 then Hosszu will have 18 points and Sjostrom will have 12 making Sarah the overall winner. There is actually no even hypocritical option for Hosszu to win and opportunity to make a tie is very very slim. The only… Read more »

I don’t believe we ever implied in this story that Hosszu had won or even made herself the favorite to win the series. But based on the current results of the meet, she’s made up 3 points.

Yes, this is true that this article and the picture of celebrating Hosszu is just about of her making 3 points. Yes, three points are three points and I would be endlessly happy to win them. Context doesn’t matter.

Ye Shiwen doing 200 breast in 2:18 wow. She challenged efimova at the end.

They include prelim times for performance points?