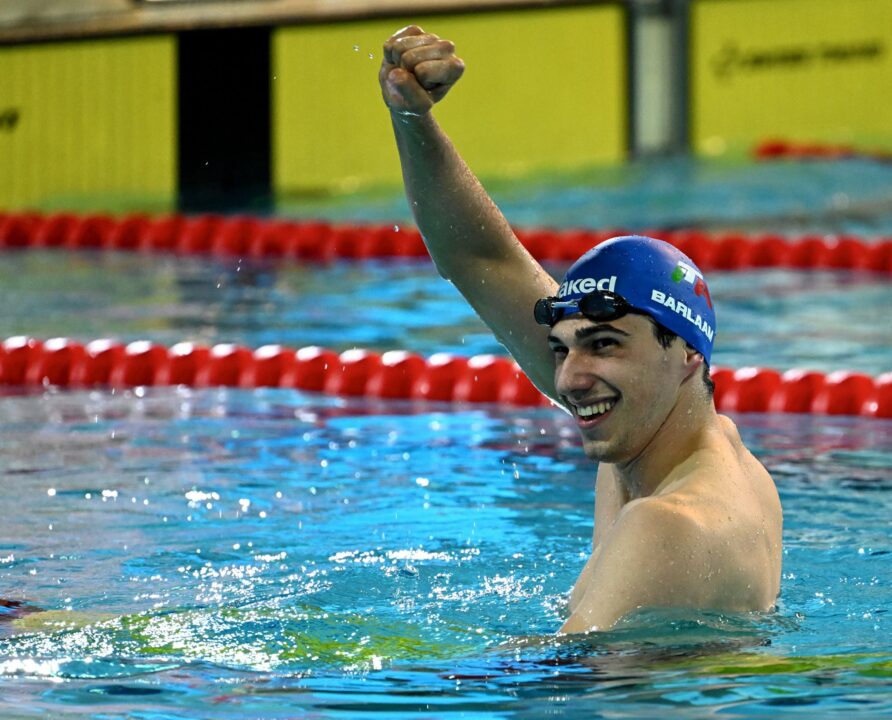 Barlaam crushed his own 100 free S9 world record by .8 to win gold for Italy, helping further establish their dominance on the medal table after day four. Current photo via Augusto Bizzi/FINP

Italy’s Simone Barlaam destroyed his own world record in the men’s 100 freestyle S9 to win gold on day four of the 2022 World Para Swimming Championships. Nobody could catch the Italian 21-year-old as he barrelled down the pool, flipping with a 1.2 second lead over the field at the halfway mark. He touched the wall first at 52.23, .80 faster than the world record mark he set in 2021. Barlaam is now a three-time world champion in this event and while he didn’t swim this individual event at the 2021 Paralympics, he did help Italy to a silver medal finish in the 4×100 free relay in Tokyo.

This is Barlaam’s second gold medal at this meet, following his win in the men’s 100 fly S9 event yesterday where he set a championship record and out-touched world record holder William Martin of Australia. His 100 free gold medal was one of nine medals Italy gained today to maintain their dominance on the medal table, including a 1-2 finish in the women’s 200 IM SM5 by Monica Boggioni (3:40.27) and Giulia Ghiretti (3:44.50), alongside gold medal wins by Antonio Fantin in the men’s 400 freestyle S6 (4:57.72) and Francesca Xenia Palazzo in the women’s 100 freestyle S8 (1:06.93). Palazzo had a tight race with Great Britains’s Alice Tai who has held the world record since 2018. Tai ultimately finished 2nd (1:07.16).

Medal-wise, it was also a great day for Brazil and the United States who won a total of 14 and 7 medals, respectively. Brazil’s Gabriel Geraldo dos Santos Araujo broke the men’s 200 freestyle S2 championship record to win with a time of 3:59.06, putting the record under the 4-minute mark for the first time. This is the 20-year-old’s second individual gold medal of the meet. Brazil also had a 2-3  finish in the men’s 200 IM SM5 by 16-year-old Samuel da Silva de Oliveira (2:59.25) and Tiago de Oliveira Ferreira (3:15.01). Da Silva de Oliveira has now won four medals for Brazil at this meet, including gold medals in the 50m back and 50m fly, S5 class.

USA’s Gia Pergolini cracked the championship record in the women’s 100 backstroke S13 with a time of 1:04.80. The 18-year-old won this event at the Tokyo Paralympic Games by setting a world record time of 1:04.64. This is her second individual gold medal of the meet for Team USA. The favorite to win the women’s 100 back S13 was Italy’s Carlotta Gilli who holds the championship record, but she narrowly missed the podium by .11 to place 4th.

“Starting at 13, seeing five years go by and seeing not just how much I’ve grown, but how much my teammates have grown and how much progress we’ve made, it really means a lot to be here with this medal,” Pergolini said in the Team USA press release. “I think my 13-year-old self would be proud.”

Her fellow 18-year-old teammate Anastasia Pagonis won the women’s 200 IM SM11 with a time of 2:49.73. Both of them are fresh off their Paralympic Games debut in Tokyo where they each won gold. Pagonis described her post-Tokyo struggles and excitement to get back to racing. “After Tokyo, mental health has been a really big challenge for me,” she told Team USA. “So I’m so happy to just get back in the pool and have fun with it.”

“This year has been a process like I’ve never gone through before,” Smith told Team USA. “I took four months off after Tokyo to really reevaluate where I was in the sport. I have been changing my approach in training, and it seems to be working, so I’ll be continuing that going forward toward hopefully Paris 2024.”

Griswold said he was able to turn his pre-race nerves into a learning experience. “I had a lot of doubt going into this event, even just as I stacked up behind the block,” he said. “I was able to rally, relax and bide my time, and find a way to make it happen. On the way back, I knew I had a chance and just gave it everything I had. It’s definitely a learning experience, and hopefully it’ll help me prepare for possibly competing in a relay in the coming days.”

Italy and the U.S. maintained their 1st and 2nd places on the medal table while Great Britain has been bumped to 4th. Spain, Ukraine, and Canada all moved one spot up, pushing Columbia down one. A few other countries also moved down, notably, Australia slipped from 7th to 10 despite gaining 4 medals today. Mexico earned 5 medals to jump from 14 to 11. The Czech Republic joined the medal table for the first time this meet thanks to Arnost Petracek who won the men’s 50 backstroke S4 with a time of 41.94.

One other championship record went down on Wednesday in the men’s 200 IM SM11 where the Netherlands’ Rogier Dorsman hit the wall first with a time of 2:18.80. He came within .33 of his own world record from April to win his third gold medal of the meet and help push the Netherlands one spot up on the medal table.

The men’s 100 backstroke S13 was a big event for the Canadian team as Nicolas Guy-Turbide touched the wall first with a time of 1:00.17, out-touching Dutch 19-year-old Thomas van Wanrooij by .38 to win gold. This meet is Turbide’s fourth World Championships and he won silver in this event at the Tokyo Paralympics, but this is his first World Championship title.

“It was probably the toughest race of my life physically,” Guy-Turbide told Swimming Canada. “I’ve had lower back problems since the 2019 Worlds. I think that once again today, it was my experience that paid off. I was able to perform when it mattered. To be honest though, I think I have a limited number of races like this left in my body.”

“I tend to turn behind everyone a bit. But it’s pushing a little harder and wanting it a little more in the last 50 that counts. That’s what helped me reach the top of the podium today.”

World record holder and defending Paralympic champion Ihar Boki of Belarus would’ve been the favorite to win the men’s 100 back S13 event until FINA banned Russian and Belarusian athletes from competing at Worlds this year. Likewise, the men’s 50 back S4 event was missing Russia’s Roman Zhdanov who set the world record to win gold at the Tokyo Paralympics.