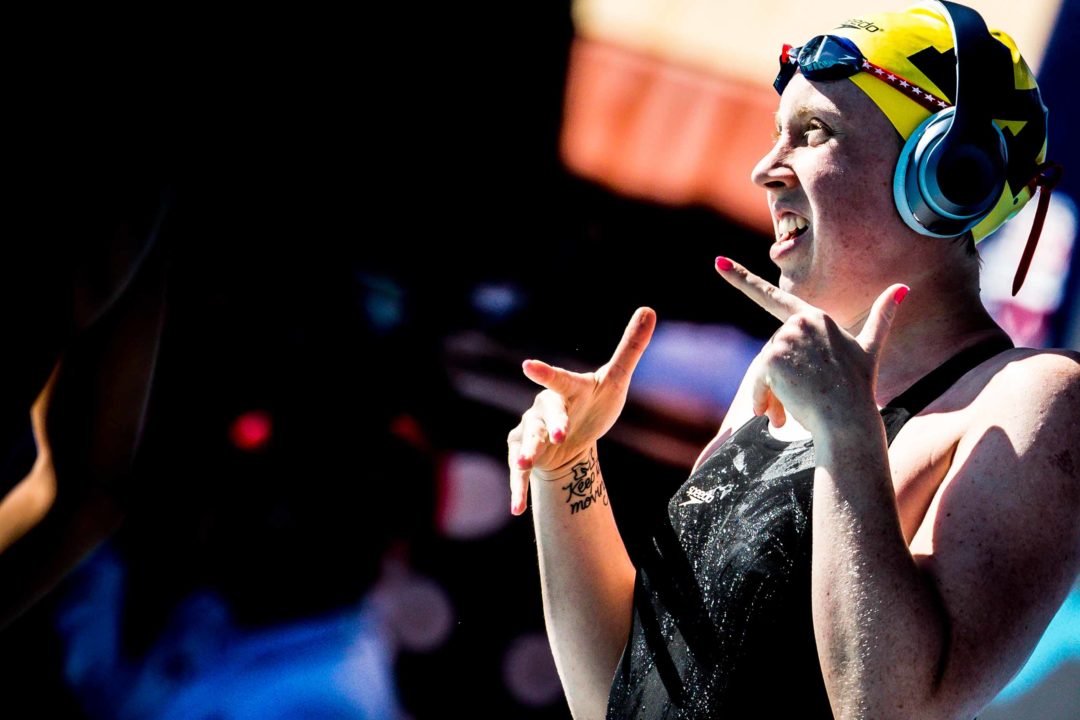 Schmidt swam only the 1650 today, clocking a 15:53.52. Stock photo via Jack Spitser/Spitser Photography

Michigan hosted Michigan State and Rutgers for a women’s tri-meet on Saturday at Canham Natatorium. The meet had a lot of significance, given that it was potentially the final dual between Michigan and Michigan State, and Rutgers only had 5 athletes competing.

Michigan State made the decision to cut it’s swimming & diving programs after this season, meaning this meet was likely the final regular season matchup between Michigan and Michigan State. In a show of solidarity, the Michigan coaching staff wore “Save MSU Swim & Dive” masks on deck. Head Michigan coach Mike Bottom said of the masks, “we talked before the meet about how we could honor them…the idea of not competing against Michigan State in the future is so sad.”

.@MikeBottom: "We talked before the meet about how we could honor them. We want them as our competitor. The idea of not competing against Michigan State in the future is so sad."

Thanks for all of your support. #gogreen and for the first time in my life #goblue ❤️ https://t.co/GtV39j9Wdj

Rutgers, on the other hand, only has 5 athletes currently on campus training. In a recent SwimSwam Podcast episode, head coach Jonathon Maccoll discussed the fluidity of the Rutgers roster right now, due to the pandemic. The staff at Rutgers felt it was best to have its swimmers stay home if they had a more solid training environment there, instead of having all the swimmers come back to train on campus, given the ever-changing protocols and restrictions surrounding the pandemic. Right now, the Scarlett Knights have 5 athletes competing, but coach Maccoll said there could be anywhere from 5-12 athletes competing this season. The rest will be redshirting.

The Wolverines matched the men’s team in pulling out victories. Maggie MacNeil and Sophie Housey each won a pair of events, while Sierra Schmidt posted the fastest mile in the nation this year.

Michigan State picked up a huge win the 100 breast, where Erin Szara posted a 1:01.67. She was the only swimmer in the field under 1:05, controlling the race from start to finish.

“This was a fun meet,” said head coach Mike Bottom. “It was fun seeing the entire team cheer and push Sierra forward during the mile. It was fun seeing Victoria swim a 400 IM that’ll likely get her invited to NCAAs. And it was fun seeing swimmers find success in events that may not be their strength. There were a lot of great swims today, and the best part is, we’re continuing to improve.”

The Wolverines kicked off the meet with a commanding win in the 400-yard medley relay (3:40.67). Junior Maggie MacNeil, less than 24 hours removed from learning she had been named to the Canadian Olympic Team, led off in 52.75, while junior Olivia Carter added a solid 52.96 split on the butterfly leg. MacNeil was one of two double victors on Saturday, showing easy speed to win the 50-yard freestyle (22.30) and 100-yard freestyle (50.12).

The other was freshman Sophie Housey, who built on the strong start to her rookie season. She took the 200-yard butterfly out fast and held onto that speed to win by nearly six seconds (1:58.94). Later in the 500-yard freestyle, just .05 seconds separated her from teammate Sophia Kudryashova with 100 yards to go, but Housey turned on the jets and pulled away to take the win (4:55.59).

The next and final dual meet of the season is scheduled for Saturday, Feb. 6, when Michigan welcomes rival Ohio State to Canham Natatorium. The start time will be announced at a later date.

East Lansing, Mich. — Michigan State’s dual meet against Michigan concluded on Saturday, as the Rutgers women also competed.  The Spartan women earned a 185.0-48.0 win over Rutgers, but fell to the host Wolverines, 146.0-107.

The men’s portion of the swimming events were held on Friday evening, and Michigan took a 137-77 lead.  With only diving contested on Saturday (and no male MSU divers competing), the final score finished at 159.0-77.0 in favor of the Wolverines.

“As I said last night after our men competed, I’m just really proud of our athletes,” said head coach Matt Gianiodis.  “There’s been a lot of starts and stops and practice interruptions, and through all of that I think our athletes have done a great job of staying focused on their process.  We now have a couple of weeks to get better before we race at Penn State, and hopefully the road is a little smoother and we can focus on progress.”

Two seniors led the way – diver Amanda Ling made the “A” cut on the 1m board, scoring a 308.0 and taking second place.  Meanwhile, Erin Szara posted a commanding victory in the 100 breast, clocked in a time of 1:01.67; she was nearly four seconds faster than the second-place finisher which was also a provisional cut for the NCAA Championship meet.  She also placed second in the 200 breast (2:20.63).

Both the men’s and women’s teams will be in action the weekend of Feb. 5-6, when MSU travels to State College for a meet with Penn State.

ANN ARBOR, Mich. – The Rutgers women’s swimming & diving squad was back in the pool on Saturday taking on No. 5 Michigan and Michigan State at Canham Natatorium.

Highlighting the day’s action was a new PR from junior Jenna Douglass on the 1m and junior Kasja Dymek’s runner-up performance in the 100 fly and third place result in the 100 free.

“Jenna demonstrated her consistency on one meter improving her qualifying score by almost 2 points which is so important with our new covid qualifying system.  Both Jenna and Megan competed well and and showed technical improvement which is great to see with Big Tens only a month away.  They are so happy to be competing again!” – head diving coach Frederick Woodruff

Great swim alone and she was in the right lane.