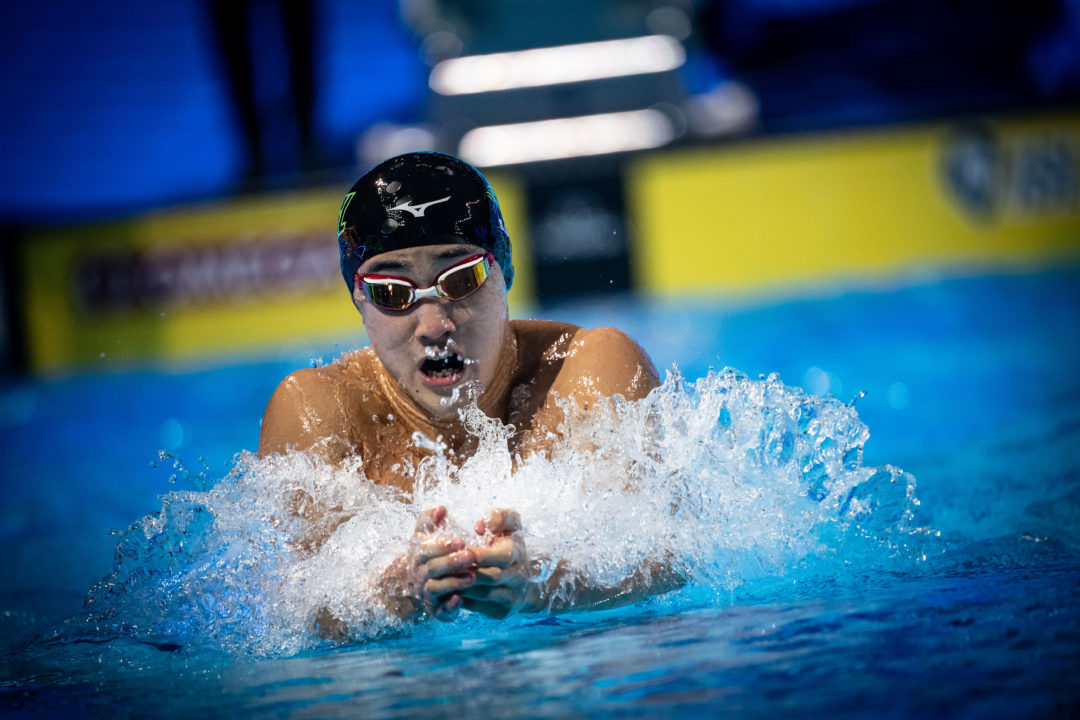 20-year-old Shoma Sato just casually put up a 200 breaststroke time that would have rendered him in 6th place at the 2019 FINA World Championships. Archive photo via Mike Lewis/Ola Vista Photography

Day 2 of the 2021 Tokyo Senior Spiring Meet brought more heat, with the likes of Kosuke Hagino, Rio Shirai and Shoma Sato in the water.

That time falls just .01 outside of the 1:57.67 Hagino logged in December, rendering the 400m IM Olympic champion as the 4th fastest performer in the world this season.

The winner of the aforementioned 200m back, Ryosuke Irie, doubled up with a solid victory in the 100m sprint this evening. Opening in 25.90 and closing in 27.20, 31-year-old Irie punched a result of 53.10 to impressively beat the field by nearly a second.

Hagino was indeed among the remaining racers, settling for bronze in 54.70 while Masaki Kaneko split the two with silver in 54.04. For Irie, the Japanese Olympic icon already owns a season-best 2back time of 53.04, which slots him as the 4th fastest man in the world this season.

The women’s 100m back saw Rio Shirai get it done for gold in 1:00.73, while she also snagged the top prize in the 10om free. Getting to the wall in a time of 54.81, Shirai beat yesterday’s two-time gold medalist Chihiro Igarashi by just a fingernail. Igarashi touched in 54.85 to represent the only other swimmer under the 55-second threshold in the race.

Making waves once again in the men’s 200m breast event was 20-year-old Shoma Sato. At this non-championship meet, Sato posted a winning effort of 2:07.81, a time that would have placed 6th at the 2019 FINA World Championships.

Sato already sits atop the world rankings, wearing the crown with a huge lifetime best of 2:06.78 from last month’s Japan Open. You can read more about that history-making swim here.

Terada owns a season-best of 1:56.11, while Kobori’s effort this evening is his quickest of the season, now bumping him up to become the 4th fastest swimmer in the world so far.

With the nation’s Olympic Trials meet of the Japan Swim coming up in April, the 200m fly roster spots for a home-based Games look to be a fierce fight to the wall, with even short course world record holder Seto not a shoe-in.

Another swimmer who made moves into the world rankings tonight was Katsumi Nakamura. The national record holder registered a winning 100m free time of 48.34, his fastest of the season. The man who became Japan’s first-ever sub-48 second 100m freestyler beat his domestic rival Shinri Shioura handily tonight, with Shioura snagging silver in 49.15.

The Japanese men 200 flyers are like Kenyan 3000 meter steeplechasers: so many of them its hard to keep track. Somebody is going to go a 1:54 at their Trials and not make the team.