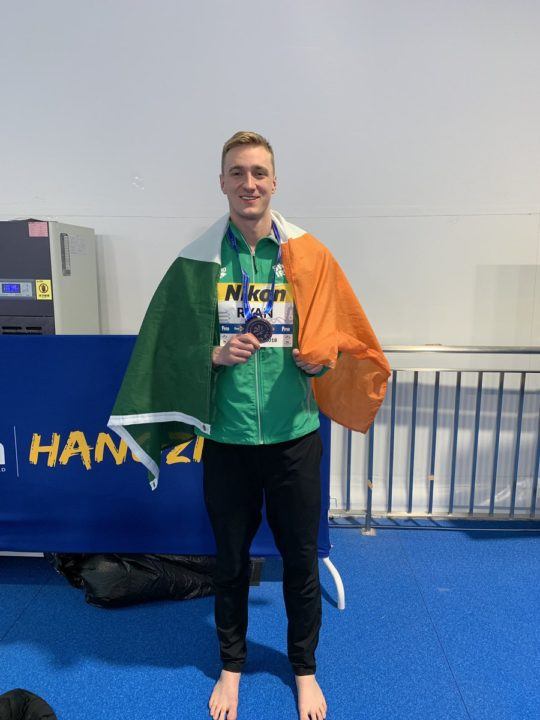 Racing is getting back into the groove around the world, which means we're going to be seeing more and more records being broken. Archive photo via Swim Ireland

While racing at time trials held within a practice at his home base of the National Training Centre – Dublin, Shane Ryan set two unofficial Irish national records…in the same race.

Contesting the short course meters 100 butterfly, Ryan opened in a first 50m split of 22.70. That performance surpassed his own official national record of 22.96 he put on the books in December 2019 while competing at the Irish Open Short Course Championships.

On the back half of tonight’s time trial, Ryan closed in a time of 27.7 to collect a final overall time of 50.4. That mark also unofficially crushes the Irish national record in the event, which is represented by the 51.33 Brendan Hyland established at the aforementioned Championships.

Per 26-year-old Ryan, this marks the first time he has ever raced a 100 fly in short course meters. The former Penn State student-athlete is most known for his backstroke prowess, owning Ireland’s records across the 50m/100m distances in both meters formats. He most recently took bronze in the 50m back at the 2019 European Short Course Championships.

Stick around for the full video below, which shows the same race under the water as well, to give us a nice view of Ryan’s underwaters.

He’s got some great underwaters.

Wow, 9-7-5-3 dolphin kicks. Quite the drop off! But maintained his stroke pretty well.

2
0
Reply
JP input is too short
Reply to  Dan

I would guess if he wasn’t looking for a 50 fly record he probably would have paced it a bit better and had some energy for a better UW on his last 25!