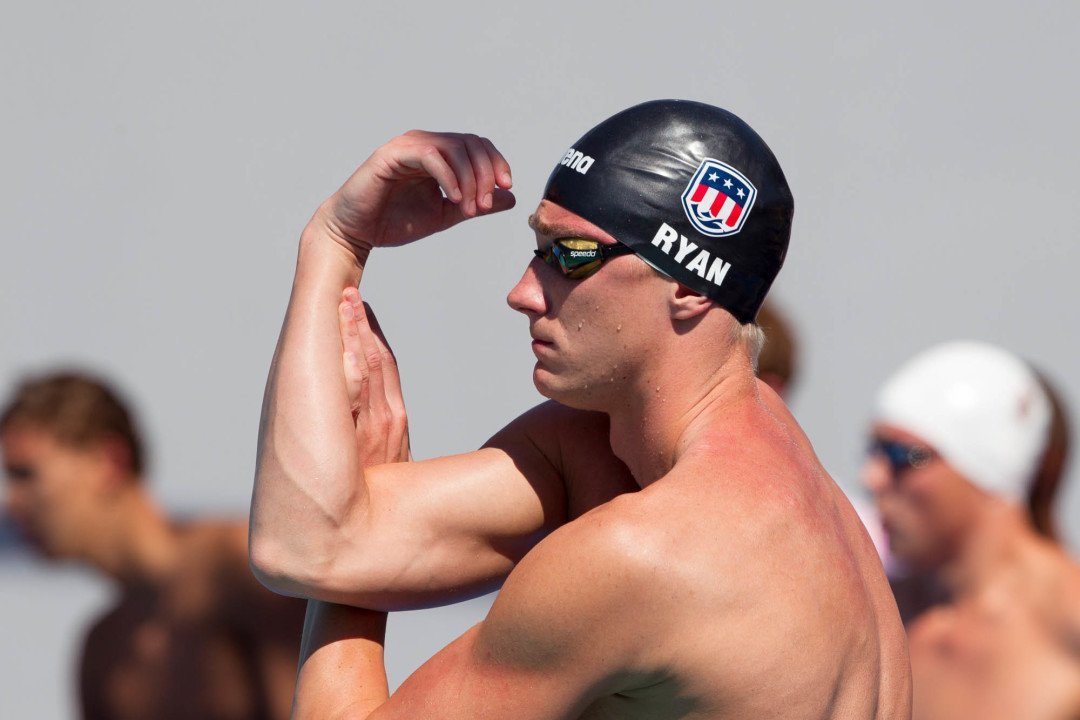 PENN STATE VS. RUTGERS VS. YALE

The Yale women remain undefeated in dual meet action this season after taking down Penn State and Rutgers in a dual meet on the road. The Penn State women also came away with a victory after defeating Rutgers. On the men’s side of the meet, the Penn State men were victorious over Yale.

UNIVERSITY PARK, Pa. – The Penn State men’s swimming & diving team used a total team effort to edge Yale in a dual meet that went down to the final race, 185-168, Saturday in McCoy Natatorium.

The two teams were tied 93-93 after Friday evening, and went back-and-forth Saturday. After winning the 400 IM, Yale (8-1) trailed Penn State (2-3) by eight points going into the final 400 freestyle relay. JP Cervone (Sao Paulo, Brazil) and Bob Bantley (Maple Glen, Pa.) led the race off, and Matt Stasiunas (Avondale, Pa.) swam the third leg despite swimming in and placing fifth in the 400 IM the race before. The trio kept Penn State at the front, allowing Shane Ryan (Havertown, Pa.) to close the race and the meet out, as he touched first for a team time of 2:59.46.

Penn State will next host Navy for Senior Day Saturday starting at 11 a.m. It will also be Military Appreciation Day, and the intermission breaks will feature a Penn State Ability Athletics exhibition race and the second annual Great Penn State Duck Toss, respectively.

McHugh and Francis also teamed up for the team’s top performance Friday, finishing 1-2 in the 1000 freestyle. Both swam nearly identical personal bests of 9:53.82 and 9:53.85, respectively.

Penn State will next host Navy for Senior Day Saturday starting at 11 a.m. It will also be Military Appreciation Day, and the intermission breaks will feature a Penn State Ability Athletics exhibition race and the second annual Great Penn State Duck Toss, respectively.

Day two started off on a strong note with a victory in the 200-yard medley relay from the “A” squad of Heidi VanderWel, Charlotte O’Leary, Maddy Zimmerman and Isabella Hindley with a final time of 1:43.12.  They just out-touched the Penn State “A” squad by half a second.  Yale’s “B” squad of Jacquelyn Du, Pauline Kaminski, Lili Margitai and Kate Rogers was not far behind, taking third place with a final time of 1:44.68.
Junior Cailley Silbert, who took third in last night’s 1000-yard freestyle, took fourth place in the 500-yard freesytle in 4:56.78.  Teammates Kendall Brent and Isla Hutchinson-Maddox took fifth and sixth, respectively.
Sprint duo Hindley and Kina Zhou went 1-2 in the 100-yard freestyle, finishing just four one-hundredths apart in 50.53 and 50.57, respectively.  Margitai took fourth in that event with a final time of 51.85.
Destiny Nelson led the pack in the 200-yard backstroke, touching first in 2:00.76, ahead of a slew of Penn State and Rutgers competitors.  Olivia Jameson, Rogers and Elizabeth Felix took fifth through seventh places, respectively.
In the 100-yard butterfly, Zimmerman pulled out a second place finish in 55.87 and Zhou was right on her heels in third place in 55.90.
The breaststroke trio of O’Leary, Kaminski and Ashley Pales found success in the 200-yard breaststroke event, following up on their solid finishes in last night’s 100-yard event.  O’Leary took second behind a Penn State competitor in 2:18.36, Kaminski took third in 2:19.16 and Pales took seventh in 2:25.66.
In the final individual swimming event of the meet, the 400-yard individual medley, Nelson was the top-scoring Bulldog, finishing in second with a final time of 4:20.66.  Pilkinton was fourth in 4:25.04, Michelle Chintanaphol was fifth in 4:27.75 and Beatrix Thompson was sixth in 4:28.17.
In the final relay event of the meet, the 400-yard freestyle relay, the Bulldogs “A” squad grabbed a first place finish in 3:21.44.  The “B” squad was fourth in 3:30.35.
Diving was highlighted by a quad of strong finishes in the top eight of the 1-meter event from Talbott Paulsen, Lilybet MacRae, McKenna Tennant, and Hannah Walsh.  Paulsen was second with 297.20 points, MacRae was fourth with 275.90 points, Tennant was fifth with 273.70 points, and Walsh was eighth with 249.75 points.
Head Diving Coach, Chris Bergere, was pleased with the results and said, “The divers performed very well today.  They are getting better and still finding small skills to improve on.”
This leaves the Bulldogs undefeated so far this season in dual and tri-meet competition, with a record of 13-0, with just one dual and one tri remaining before the championship season begins in mid-February.

STATE COLLEGE, Pa. – The Yale men’s swimming and diving team took its first dual meet loss against Penn State 185-168 this weekend. The Bulldogs held Penn State to a stalemate on day one of the competition, but were unable to gain a lead on the second day.

Yale struggled in the relay events throughout the weekend. However, the team managed to take runner-up in both the 200-yard medley relay and 400-yard freestyle relay on the second day, just barely missing out on first.

Yale had big races in the 200-yard backstroke, sweeping the event one-two-three. Leading the pack, junior Shawn Nee touched first with a time of 1:50.49. Following closely behind were senior Alex Schultz and sophomore Edward Stolarski in second and third respectively.

The Bulldogs had difficulties in the 100-yard butterfly, but sophomore Scott Bole managed to pull ahead in a tight race for second. Bole, who touched at 50.06, was just five hundredths of a second ahead of his Penn State opponent.

“It always hurts coming up on the losing end of a close meet, but I think we have a lot to be proud of,” noted team captain Alex Goss. “Looking forward, we’re still alive for a league title and will have a huge meet against Cornell next week.”

Although the Bulldogs took their first dual meet loss this season, they remain undefeated in the Ivy League. The team will look to rebound as they take on Cornell in Ithaca, N.Y., next weekend on Jan. 22.

“I’m proud of the team and how we worked together this weekend,” said head coach Petra Martin. “Our team unity is strong and the atmosphere this weekend was very positive. Even though we are very sore and tired right now we kept fighting. We are in a lot better place as a group compared to last year at this point of the season and that is important.”

Walkowiak finished first in the 1-meter dive with a mark of 308.30. The Ballston Spa, New York, native also placed first in the 3-meter dive on Friday night. Senior Alyssa Black contributed a third-place mark of 295.20. Both performances were NCAA Zone qualifying marks.

In relay action, RU finished second in the 400 freestyle relay, as senior Meghan Kiely and freshmen Clare Lawlor,Meghan Moses and Alexandra Fabugais-Inaba hit the wall with a time of 3:29.54. In the 200 medley relay, senior Rachel Stoddard, sophomore Vera Koprivova and Francesca Stoppa and rookie Vanessa Ruiz added a fourth-place time of 1:45.54.

Individually, Koprivova placed fourth in the 200 backstroke with a time of 2:02.44, and Stoppa contributed a fourth-place result of 55.94 in the 100 butterfly.

“Our team culture is strong and we can see that in everything we do,” Martin said. “The team is sticking together through thick and thin and driving towards a common goal. Our captains have been doing a great job with the whole group as well and I’m proud of their focus and all the thought and work they put into the team.”

Rutgers returns to action Jan. 20-21, when the Scarlet Knights compete against Cincinnati and Virginia Tech in Christiansburg, Virginia.