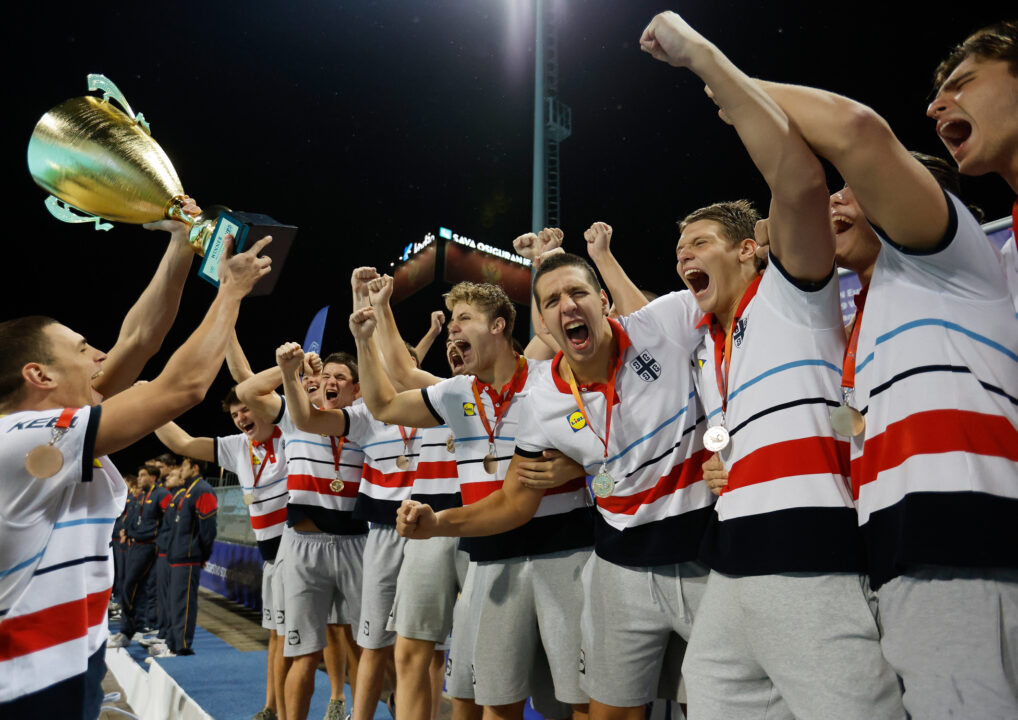 In a thrilling final, the decisive goal came with two minutes to go while the Serbs killed four man-downs in the last five minutes. Current photo via @LENaquatics / Twitter

The draw for the second qualification round has set up really exciting groups – all three days will offer premium entertainment.

Recco didn’t leave any room for doubt and after a perfect 5-0 storm in the third period the Italian side claimed a record-breaking 8th Super Cup title.

After back-to-back penalty shootout wins in the quarters (vs Italy) and the semis (vs Hungary), Serbia clinched the title in regular time against Spain. The final was no less thrilling as their previous encounters, the decisive goal came two minutes from time while the Serbs killed four man-downs in the last five minutes. It’s a painful loss for the Spaniards – while this was the Serbs’ third title in the last four editions, Spain had to settle for the silver for the 6th time since the inaugural 1970 championship (and yet to finish first). The bronze went to Hungary which managed to beat Greece convincingly.

Serbia ‘finally’ won a game in the regular time – and that landed them the title. They got back to the throne they had occupied in 2014 and 2016, after missing the podium in 2018 (the 2020 edition was cancelled). The Serbs’ last three matches in the knockout phase were all thrillers, they ousted Italy in a shootout in the quarters, beat Hungary again with penalties in the semis, then nailed against Spain, scoring the winner two minutes from time.

In the final, Spain took the lead and Serbs needed almost six minutes to score their first but then added one more to go ahead 2-1 after eight minutes. Soon they doubled the gap and still held on for 4-2 deep into the third but the Spaniards levelled the score in 47 seconds while the Serbs’ captain Vasilije Martinovic got his second exclusion. Still, his team-mates didn’t panic, and Nikola Kojic netted an action goal in the very last second of the first half for 5-4.

Again, the Serbs managed to reset the two-goal difference twice, however, Spain could come back to even again, two man-up goals in two minutes were enough to make it 7-7, while the Serbs missed two extras still in this period.

Not in the fourth, though, Aleksandar Kovacevic put away a 6 on 5 after a minute, however, despite missing their next man-up, Spain could equalise, Gerard Gil sent the ball home from action for 8-8. With 5:23 to go, Serbia took a time-out, but the man-up play didn’t work; still, a save also denied the Spaniards in their extra. A bit later, with 3:24 on the clock, the Serbian head coach Uros Stevanovic got a red card (not for the first time in his career, though his impulsiveness is definitely one of the keys to his teams’ successes) – that just boosted his players’ morale who killed back-to-back man-downs and then Martinovic, still in the water, sent a brilliant bouncer from the wing under the bar in an extra, with 2:03 on the clock for 9-8.

It was Spain’s turn, but even after a time-out they were unable to overplay the super-intensive defence of the Serbs and the goalie could make an easy catch to deny them in the fourth straight man-down. The Spaniards had one more possession, managed to launch a counter-like attack but the finish was poor from the left side, and together with the ball their chances also flew away.

The Serbs kept the ball in the last half a minute and could start the big celebrations together with many supporters coming over to the neighbourhood – they claimed their 4th title (as Serbia), while Spain had to settle for the silver medal for the 6th time.

In the bronze medal match, Hungary earned some consolation with a hard-fought win over Greece. The Magyars took a 2-1 lead after eight minutes, the Greeks hit back with three connecting goals early in the second to go 2-4 up. Then came a crucial phase as the Hungarians regrouped themselves and after coming back to even by half-time, they added three more in the third to stage a 6-1 run. After falling back to 8-5, the Greeks had desperate attempts but were unable to cut the gap to one goal at any stage. With 59 seconds to go, Erik Molnar – silver medallist with the senior team two weeks ago in Split – put away an extra to close down the contest.

Croatia built a massive lead in the second period of the game played for the fifth place, and once they were 4-8 up, they never let the Italians back to the match. Host Montenegro closed its campaign with a win over Germany. It was a thriller as the home side blew a five-goal lead, but David Stevovic netted the winner 1:30 from time.