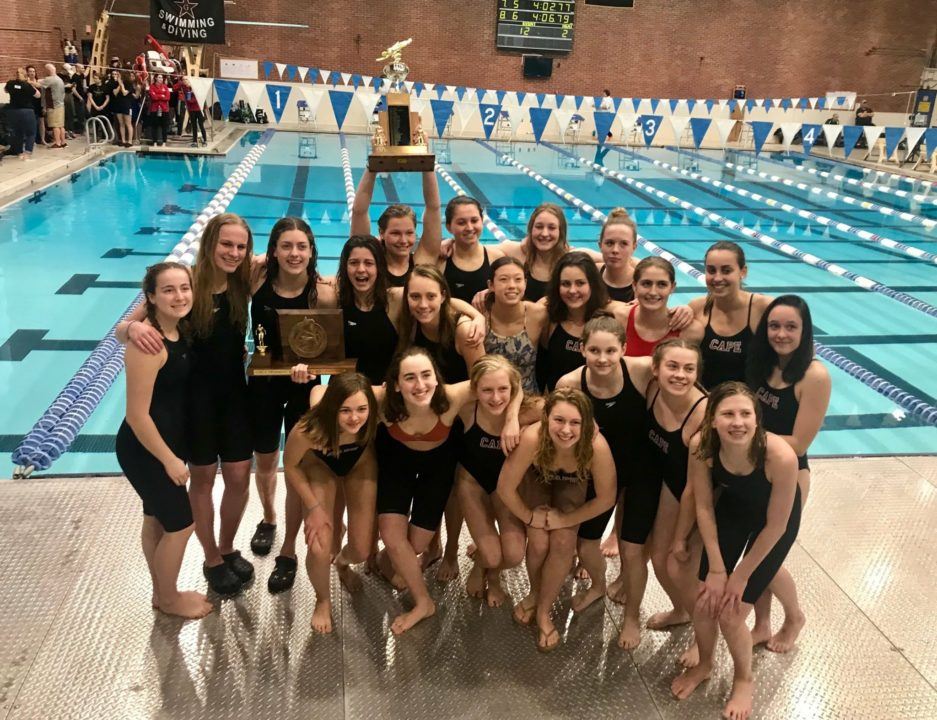 The Cape Elizabeth girls swim team – primarily composed of seniors on a quest to end their high school careers with a bang – tallied a total of seven event wins on their way to the program’s third straight MPA Class B State Championship crown.

Before the Capers began steamrolling the competition, however, Morse High School obliterated the field in the 200 medley relay. The team of twin sisters Olivia and Haily Harper, Emily Martin and Emma Warned finished in a time of 1:48.91, well ahead of Cape Elizabeth’s second place earning time of 1:54.96.

Senior Olivia Tighe got the ball rolling for Cape Elizabeth with a solid victory in the 200 free. Her time of 1:50.21 broke her own state record that she set last year. Later in the meet, Tighe and fellow team and classmate Alicia Lawrence went 1-2 in the 100 free, going 50.79 and 53.41 respectively.

For her efforts, Tighe was named Performer of the Meet.

Also picking up two individual event wins for the Capers was junior Caroline Mahoney. She first won the 50 free in a swift 23.58, besting the field by nearly a second; and then put on an even more dominating display in the 100 back, clocking in at a 55.12, annihilating the competition by over six seconds.

As if the Capers didn’t already accrue enough victories, both of their freestyle relays won state titles unscathed. The quartet of Alicia Lawrence, Caroline Mahoney, Hope Campbell and Olivia Tighe – of which only one, Mahoney, isn’t a senior – sprinted their way to a first place winning time of 1:35.24 in the 200 free relay and a 3:30.27 in the 400 free relay (which, by the way, finished twenty seconds ahead of second place Greely).

Without winning a single relay, and only winning two events, the Mount Desert Island (MDI) boys team captured their second straight MPA Class B title. MDI amassed a grand total of 381 points throughout the meet, comfortably ahead of their conference rival second place finishing Ellsworth’s 312 points.

Heading into the meet, MDI had just lost to Ellsworth at their conference meet. Building off of their momentum from conference, the Ellsworth squad of Sam Pelletier, Nick Partridge, Camden Holmes and Henry Scheff jumpstarted their team’s state meet with a win in the 200 medley relay. They finished in a time of 1:37.82, a new Class B meet record.

MDI senior Liam Sullivan fired back with a new meet record in the 200 IM. His winning time of 1:54.18 cleared the field by a whopping six seconds. Even more impressive was his second state title in his signature event, the 100 breaststroke, which he again won by a margin of almost six seconds. His state meet showing earned him the title of Performer of the Meet.

Ellis’s Camden Holmes finished his senior year as the state’s sprint champion, doubling up in both the 50 and the 100 free, posting winning times of 21.15 and 47.11.

Two freshman out of Cape Elizabeth had a phenomenal state meet debuts. Ethan Smith comfortably won the 100 fly in a time of 52.26; teammate Keegan McKenney emerged victorious in the 500 free with a 4:50.86.

The two novices later combined with Matt Yim and Rohan Freedman to take a commanding win in the 200 freestyle relay. Their combined time of 1:30.94 beat out Ellsworth’s squad, finishing in 1:32.13.

Ellsworth would have revenge in the 400 freestyle relay, as Sean Hill, Beckett Markosian, Sam Pelletier and Camden Holmes clinched the win in a time of 3:17.27. Though MDI finished behind them with a 3:18.92, they had already secured the state title with Liam Sullivan‘s win in the 100 breast.