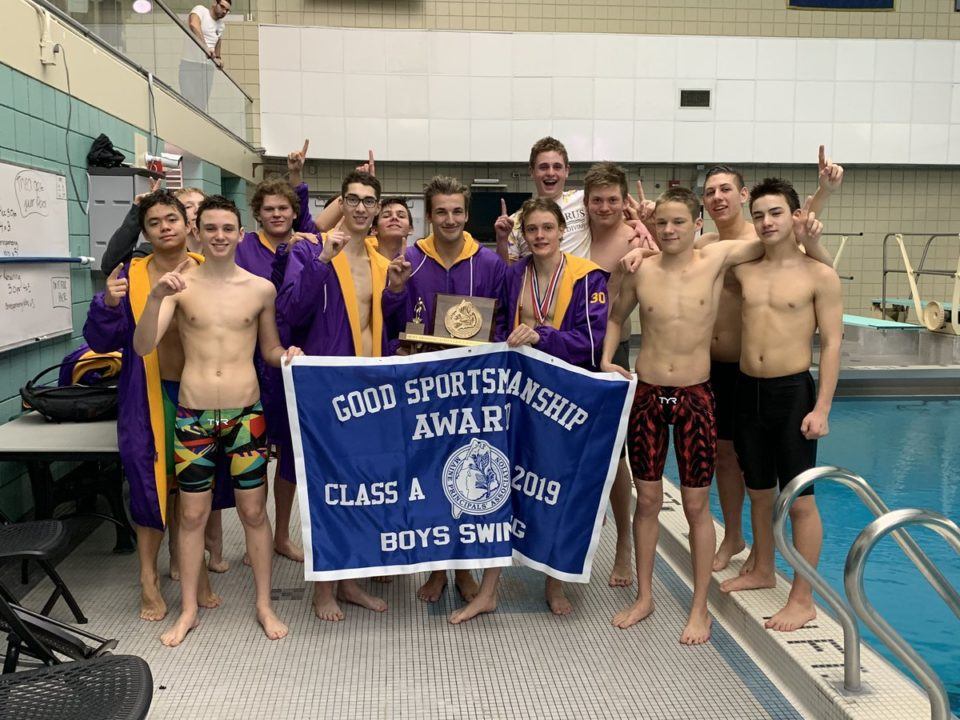 The 2019 MPA Class A State Championships witnessed a team race that came down to the final relay on the girls side, and two new state records on the boys side. Archive photo via Twitter/Cheverus Athletics

Pine Crest School has changed course on their previous decision to not participate in the 2020 Florida High School swimming season.

Wando HS won the SCHSL 5A Championship this weekend, while Spartanburg’s Annika and Kirsti McEnroe contributed to 5 meet records.

Defending state champions Cony High School took the lead from the get-go, with Bangor lurking behind them. Despite only winning the final contested event – which the title race came down to – the Bangor girls team usurped Cony to take the state championship crown, scoring 274 points over Cony’s 261 points.

The 200 medley relay team of Gabby Low, Dinkel Lunden, Emma Crosby and Cecilia Guadalupi propelled Cony to their first relay win, touching in a time of 1:49.84, breaking the meet record of 1:50.17 set back in 2013.

Cony proceeded to win the next two events. Freshman Emma Thomas jumpstarted her high school career with a state title in the 200 free, swimming a 1:57.67; junior Cecilia Guadalupe topped the 200 IM field in commanding fashion, touching over seven seconds ahead of the field at 2:05.68.

Guadalupe went on to double up on wins in the 100 free, taking the win in a time of 52.70, over three seconds ahead of second place.

Also taking two individual event wins to cap off her senior year was Cony’s Gabby Low. She obliterated the competition in the 100 fly, clocking a 55.44 – the only person under 1:00 in the event – as well as took the top spot in the 100 back, registering at a 56.33.

Seven points separated Cony and Bangor heading into the final relay. With tensions running high, Bangor thrived: the 400 free relay quartet of Rachel Hand, Ginny Hunt, Maddie Huerth and McKayla Kendall easily touched the wall first, coming in at 3:46.26, securing the state championships. Touching behind them was Cony at 3:49.71.

The Cheverus boys team swept all three relays in a dominant state meet performance, finishing with a final score of 318 points comfortably ahead of South Portland’s score of 227 points for first place. This is their seventh straight MPA Class A state title.

Kickstarting Cheverus’s state meet campaign was the team of Jack Martin, John Hight, Owen Gall-Wagoner and Quinten Hastings, who combined narrowly beat out Cony’s team in the 200 medley relay, 1:42.03 to 1:42.67.

Cony senior Nathaniel Berry followed up with a state record of his own in the next event, the 50 freestyle. He touched the wall at 20.70 – over a second ahead of the closest competitor – breaking James Wells‘s 10 year old record of 20.94. Berry went on to sweep the sprint freestyle, claiming the 100 free in a time of 47.43.

Leading off Bangor’s 400 free relay, Carson Prouty broke a second state record in the 100 free with his time of 45.99. His relay team ultimately finished third in the finals at 3:30.53 behind Scarborough’s second place time of 3:29.08.

As a ’63 graduate, it is great to see the “Stags” continue to dominate. CONGRATS on a job well done!