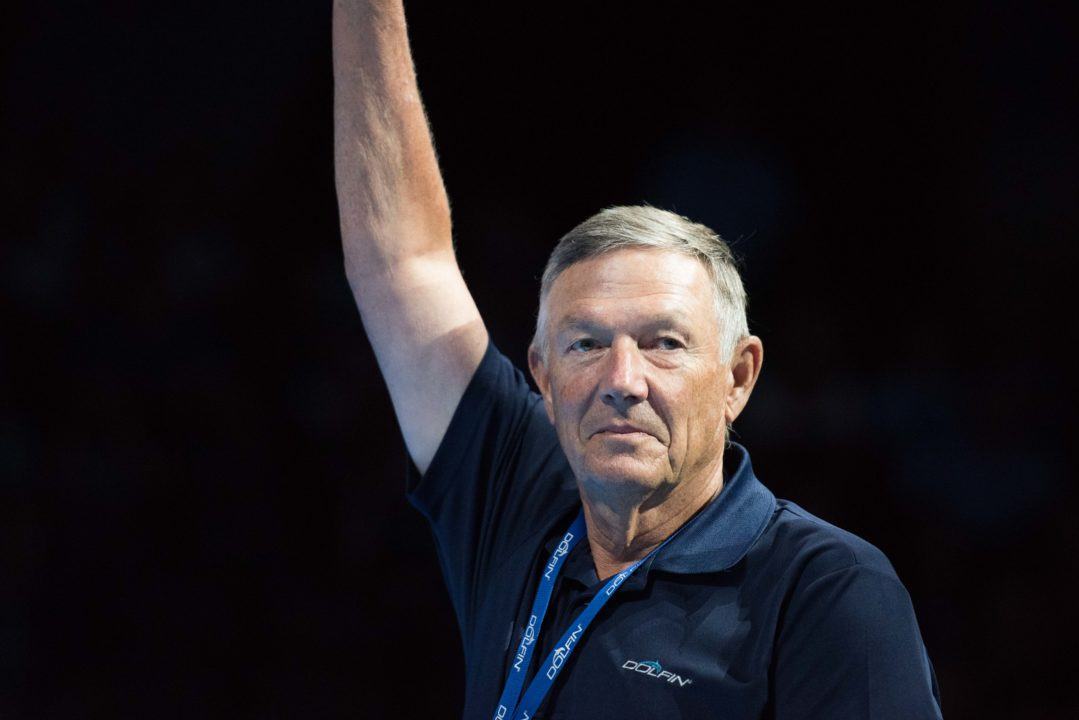 Former U.S. national team head coach Mark Schubert has responded to the civil lawsuit filed by Ariana Kukors, denying any wrongdoing and saying he reported rumors of abuse immediately when he heard them. Archive photo via Mike Lewis/Ola Vista Photography

Former U.S. national team head coach Mark Schubert has responded to the civil lawsuit filed by Ariana Kukors, denying any wrongdoing and saying he reported rumors of abuse immediately when he heard them.

Kukors filed suit against Schubert, USA Swimming, her former coach Sean Hutchison and others earlier this month. The 2012 Olympian says Hutchison began grooming her when she was 13 and he took over as her coach at age 31. She says Hutchison began sexually abusing her at 16, and that USA Swimming ignored or covered up reports of an inappropriate relationship between her and her coach. Kukors named Schubert in the suit as well, alleging that he observed behaviors at the 2006 Pan Pacific Championships and 2007 World Championships that should have alerted him of an inappropriate coach-swimmer relationship.

Schubert himself provided SwimSwam with this statement on Wednesday:

Mark Schubert absolutely denies any wrongdoing.  He is confident that when all the facts are known, the record will show that he never ignored, or turned a blind eye to, the abuse of an athlete.  When Coach Schubert first became aware of the rumors of abuse, he reported them immediately and sought to make sure they were properly investigated.  Coach Schubert had and continues to have no tolerance for anyone who would harm a minor or violate the trust that athletes and their parents place in their coaches.

Throughout his career, Coach Schubert has always placed what is best for the athletes first and foremost.  It has been the great honor of his professional life to work with terrific young people – not just the Olympic champions and world record holders, but thousands of great kids who have learned about discipline, commitment, and hard work through swimming.  Helping them achieve their goals, no matter how big or small, is why he continues to coach after 46 years.

Of course he denies it…

Is it possible that someone could be falsely accused?

Is it possible that alleged “crimes” are not equivalent?

So did Brian Banks

One of the only things we really know about Mark in this case is that he did hire a PI when he heard the rumors (2010 ish?). Smartly, as it turns out, he knew he couldn’t trust anyone in The Springs to act. I’m not sure he isn’t the only one who tried to do anything at all in real time. If rumors of AK and SH were going around when she was underage (2006 ish), this lawsuit is the first most have heard of it. What do i know, but I would be surprised that Schubert had that kind of inside knowledge then. Those who victimized AK (or any athlete) – or abetted them can burn. But I would… Read more »

The better question: why is Mark Schubert referring to himself in the third person?

Coach doesn’t have the answer. Maybe it was drafted by his lawyer and sent in on his behalf.

I don’t know who wrote the statement, but coach Schubert is the one who sent it to us.

There should be absolutely no statement from anyone. A “no comment” is really the best statement that anyone can make in these circumstances.

“There should be absolutely no statement from anyone. A “no comment” is really the best statement that anyone can make in these circumstances,” Said The Lawyer..

Anyone else sick of having lawyers running youth sports… Or running anything for that matter?
Hedging risk instead of addressing issues; worrying about outcomes instead of process. Protecting arses instead of doing the right thing. Settling out of court with gag orders rather that solving problems, sharing the lessons learned, and implementing safeguards.
I think Shakespeare had it right a few hundred years ago.

I might have tended to agree with you a few years ago, but not anymore. Not in this age of social media and mob mentality where people with no facts and with varying personal agendas want to be the judge, juror and executioner on every matter or issue raised on a social media platform. Due process and innocent until proven otherwise are almost foreign principles these days. Raise an issue on social media or in the mainstream media now and an individual is frequently presumed to be guilty. We see more and more lives being destroyed based upon mere allegations.

Lawyers running youth sports? Where? Perhaps we need some lawyers telling us what the laws are and what we are required to do as Coaches, parents and officials. Of course, the lawyers cannot be insiders who will simply parrot what the old guard/resistant to change types want to hear.

Thank you for asking David Berkhoff. One of my favorite Olympic tv memories is the Berkhoff Blastoff. Had to say it. Re attorneys LSCs and member parent boards are stacked with attorneys and when questions are raised about clear cases of abusive coaches with WITNESSES, the LSC has said “there’s nothing we can do”. Where do I turn, David? Safesport? “Nope. It’s not sexual so we don’t care what this Coach says or does to swimmers, coaches, parents or lifeguards as long as it isn’t sexual. We let the club Board handle this,” said the LSC and SafeSport. Perhaps the club? Surely they’ve witnessed the abuse vs the mentioned parties, after all the club lost nearly half their membership under… Read more »

A lawyer runs my son’s youth baseball pony league board….and its all messed up. So there, one example.

“If all the year were playing holidays; To sport would be as tedious as to work.”

Absolutely NOT sick! Who do you thinks getting rid of all these predator coaches?

How long did it take all those wonderful USA Swimming attorneys to get rid of the predator coaches? Or perhaps the question is- how many victims were silenced with gag orders thus putying nnocent little girls and boys in the cross hairs of pedophiles???

Do your research. USA swimming has failed children to protect their cushy jobs. And they did it with legal council so yes, they knew how to navigate our legal system and little children were raped as a result of their stellar counsel. That is sick, sick, sick.

“Settling out of court with gag orders” requires 2 parties…. Why didn’t you also say you’re “sick of victims accepting payouts and gag orders rather than solving the problem?”

see. All’s fair in underage rape and sodomy, right! Unless the victim is willing to put him or herself out there like AK, then tough shi7sky, eh? USA Swimming should have publicly excommunicated these coaches.

Go ahead, Guy, hold your position.
How long does it take an 8 year old to recover from their Coach raping them? How many psych sessions? Does it depend on their parent’s insurance company- 20-session max? Does the parent have to choose between warning others and their own child’s mental health? Or does the parent think- I’ll settle with USS/USA Swimming and I can help my kid and the governing body will get rid of the predator.
I think we can do better

What new you talking about JOJONV? You said you sick of lawyers settling out of court. Are you saying you don’t want lawyers to offer settlements? Which then forces the victims to receive nothing or come out in public? Why are you blaming lawyers for settling out of court is what I’m saying. And of course you twist it in to I’m defending underage rape and sodomy. Wow….. You have a very deviant mind.

What I’m saying Guy, is that USA Swimming should have identified and removed all of these coaches once they first sniffed signs of impropriety. Settling out of court allows the victim to be civilly compensated for what happened but this does not absolve these monsters of their crime. Don’t twist my words and attack me. Reread my posts and come to terms with your justification of out of court settlements and gag orders which allow Coach-pedophiles to continue to have contact with children. USA swimming failed publicly to acknowledge and address this issue. Here’s a fun place to start to educate yourself on this issue- May 31 It took 7 years to prove that USA Swimming’s founding director of safe… Read more »

We’re talking MINORS here. Ones that might just have learned to drive. The settlement of Curl was done by her parents. That poor woman has been suffering all along, and suffering in silence unt when, in her 40s, she came out about it. Sick sick sick, predatory.

Full disclosure, my then 10 year old was on a team of a now banished coach. The coach ‘dated’ a 16 year old. I’m embarrassed to say I sat and talked with him many Sunday mornings at the pool