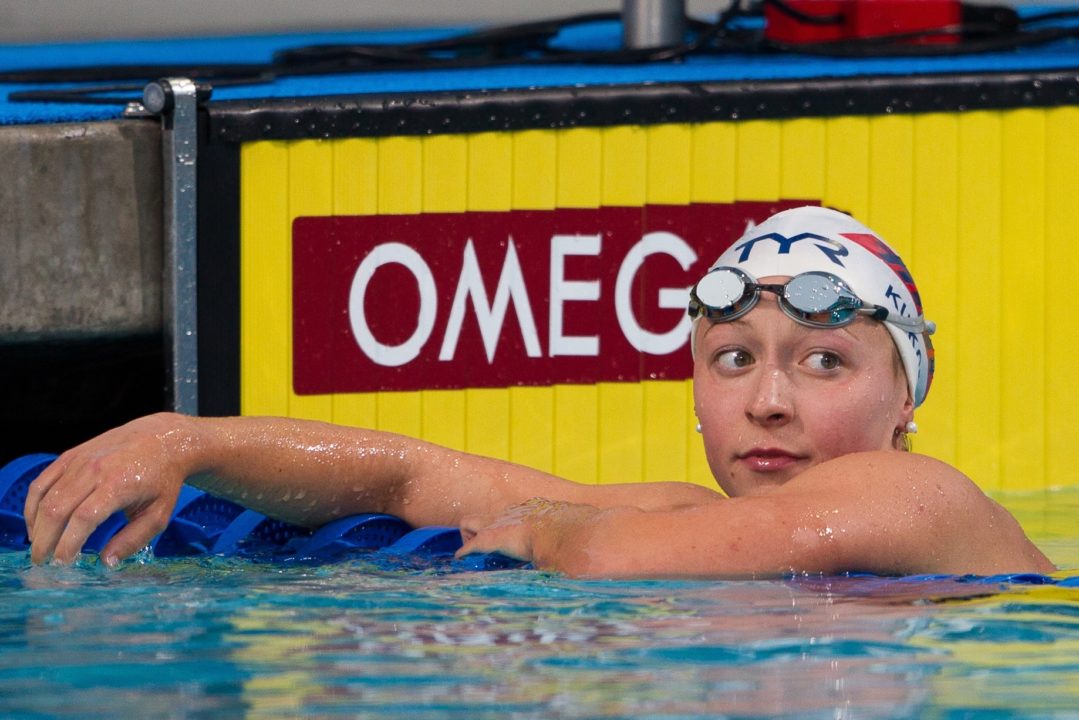 Kukors, now 28, came forward with the abuse allegations this week, claiming that Hutchison began “grooming” her at the age of 13 and sexually abusing her at 16, according to a press release from Kukors’ attorney. Hutchison first began coaching Kukors at the King Aquatic Club in Seattle when she was 13.

Hutchison coached Kukors when she made the U.S. National Team as a teen – first the Pan Pacific Championships in 2006 and Worlds in 2007. From 2009 to late 2010, Hutchison headed up a “Center of Excellence” pro training hub in Fullerton, California, a short-lived program under the banner of FAST, or Fullerton Area Swim Team. His training group included Kukors, then an adult, along with several other high-profile professional swimmers. That group rapidly disintegrated when Hutchison left at the end of 2010. There were reports and allegations that Hutchison was dismissed for an inappropriate relationship with a swimmer, though those allegations were never proven.

A press release from Kukors’ attorney Bob Allard, who has represented many victims of sexual abuse in swimming, says that “after years of suppressing memories of the pain and suffering, [she] came to the realization that she was sexually abused.” The release also says Kukors worked with the Department of Homeland Security and local police, who obtained a warrant and searched Hutchison’s apartment.

The Seattle Post Intelligencer reports that Hutchison is accused of taking nude photos of “an underage Olympian he was sexually abusing,” though it doesn’t name the athlete. That report says that a Homeland Security investigation discovered electronic devices that “may contain evidence that Hutchison sexually exploited swimmers he was trusted to coach.” The Seattle PI story goes on to say Kukors accuses Hutchison of taking “hundreds or thousands of sexually explicit photographs of her” at the age of 17.

We requested police records related to the warrant and the search, but the local police department says it isn’t required to release the public records until after the investigation is complete.

Kukors’ allegations come on the heels of the high-profile Larry Nassar case in which more than 150 women testified about alleged sexual abuse at the hands of the sports medicine doctor. Kukors’ press release mentions Nassar by name, comparing the USOC’s failure to stop Nassar’s abuse to USA Swimming’s handling of Hutchison. The release alleges that USA Swimming knew about an inappropriate athlete-coach relationship involving Hutchison as early as 2010 and didn’t take action against him.

Hutchison is still involved in coaching. He is the CEO of King Aquatic Club and runs a multi-sport training program called Ikkos. We reached out to Hutchison for comment, but have not yet received a response.

Update 2/8: King has removed Hutchison from the coaches page on its website and gave us this statement: “King Aquatics is devoted to the healthy development and safety of young swimmers and athletes.  Last night’s news broke our collective hearts.  Ariana Kukors is part of the King Aquatic family and we only want the best for her.  Our staff is meeting to review this devastating news.  Sean Hutchison is an executive with King but has had no direct interaction with our swimmers for a very long time.  We support all of the past and current King Aquatic swimmers, and that will continue to be our number one priority.”

Update 2/9: Hutchison’s attorney has released a statement from Hutchison to the Associated Press denying the allegations. His full statement is below:

“At no time did I ever abuse Ariana Kukors or do anything with her that was not consensual. I absolutely deny having any sexual or romantic relationship with her before she was old enough to legally make those decisions for herself. Prior to that time, I did nothing to ‘groom’ her.

“After the 2012 Olympics we were in a committed relationship and Ariana lived at my residence in Seattle for more than a year. Her younger sister also lived with us for several months and her mother was a regular visitor to our home. I deeply regret that she would make these wild allegations all these years later.”

In her press release, Kukors said she came forward with her allegations in order to protect others from suffering sexual abuse and grooming:

“I never thought I would share my story because, in so many ways, just surviving was enough,” Kukors said. “I  was able to leave a horrible monster and build a life I could have never imagined for myself. But in time, I’ve realized that stories like my own are too important to go unwritten. Not for the sake of you knowing my story, but for the little girls and boys whose lives and future hangs in the grasp of a horribly powerful and manipulative person. That they may not have to go  through the same pain, trauma, horror, and abuse. That their parents, mentors, and guardians  are better able to spot the signs of grooming and realize it’s tragic consequences before it’s too late.”

Kukors’ attorney says she filed a complaint with USA Swimming’s SafeSport division two weeks ago. He said USA Swimming received a complaint in 2011 and investigated by interviewing Kukors, who at the time denied she was in a relationship with Hutchison. We reached out to USA Swimming for comment but have not yet received response.

Update 2/8: USA Swimming responded with a statement detailing their 2010 investigation, in which the federation says Kukors, Hutchison and Kukors’ sister all denied any romantic or sexual relationship. The full statement is below:

“Ariana Kukors’ recent public statement marked the first time USA Swimming learned of the allegations that Sean Hutchison sexually abused Ariana when she was a minor. Our hearts go out to Ariana and the difficulty she has gone through to reach this point of disclosure. We fully support her in her case for answers and justice and applaud her courage in sharing her story in an effort to empower victims and protect athletes.
“In 2010, USA Swimming became aware of a rumored relationship between Hutchison and then 21-year-old Ariana via a third-party. Based on the information, USA Swimming retained an independent private investigator and conducted a full investigation into the rumor and the possible Code of Conduct violation.
“During the USA Swimming investigation, both Ariana and Hutchison, as well as Ariana’s sister, Emily, unequivocally denied the existence of a romantic or sexual relationship.
“With the denials from both parties, the investigation provided no basis to conclude that a Code of Conduct violation occurred, and the case was closed. Hutchison left coaching shortly thereafter but remains a member of USA Swimming as the owner of a member club based in Seattle.
“In January 2018, USA Swimming was notified of a Center for Safe Sport case regarding Hutchison and we have proactively sent over the 2010 case file to aid their investigation and support in any possible way.
“Over the last several years, Ariana has worked with USA Swimming as on-camera talent in its digital productions and has truly become a member of the family. We stand by her, and all other victims, in their quest to break their silence and confront their horrific experiences.”

My old coach always praised this guy for his founding of the IKKOS technologies. So crazy to think that at the helm of this company was a monster whose evil actions were overlooked from the start. Never been a fan of those damn ikkos glasses anyway

A worthwhile read for all of us, her story: https://www.arianajkukors.com/mystory/

Particularly important for those wondering about her age, the consensual nature, how she “just figured it out,” etc.

It’s a tough read, but an important one, and necessary if we’re ever truly going to see real change.

For the sake of accuracy, FAST was not a short-lived program. It has a long tradition of excellence that continues through the present. Hutchinson and the “center of excellence” group he was in charge of were short lived at FAST.

If you can’t find a significant other that you aren’t intrusted to have power over, re-evaluate the way you interact with other conscenting adults

Other than your spelling, absolutely on point.

Good for you Ariana! I’m a fellow PNW swimmer from your age bracket. Even though we never met you were so speedy that everyone knew your name ☺. So important that such a notable name in the local swimming community has brought this issue to light. Proud of you!

There cannot be a “consensual” relationship legally or morally when you have a power imbalance as stark as a vulnerable adolescent reliant on a venerated authority figure. Even if there was a “consensual” relationship after the swimmer entered adulthood, it would indicate that the exploited/abused adolescent became a troubled, confused young adult who could not break away from her abuser.

Having come from a very abusive home environment, with a severe alcoholic mother who was both mentally and physically abusive which I finally left home at 17 (I am 60 now) only in the past 4 years have I been able to discuss it and finally told my family the horror stories.
Many people like myself bury the feelings so deep as the pain is too hard to re live
While I know nothing about this young lady… folks on here should not be so quick to judge others that have suffered abuse and why it may have took her years to finally come forward. Each person is different in how they might deal with an abusive environment… Read more »

The King Aquatic Club has just washed they’re hands of Sean Hutchinson. He has just turned over the directorship of the club to head coach Michael Brooks.

What happened with that? Sean removed brooks and replaced him with a close friend.,,,