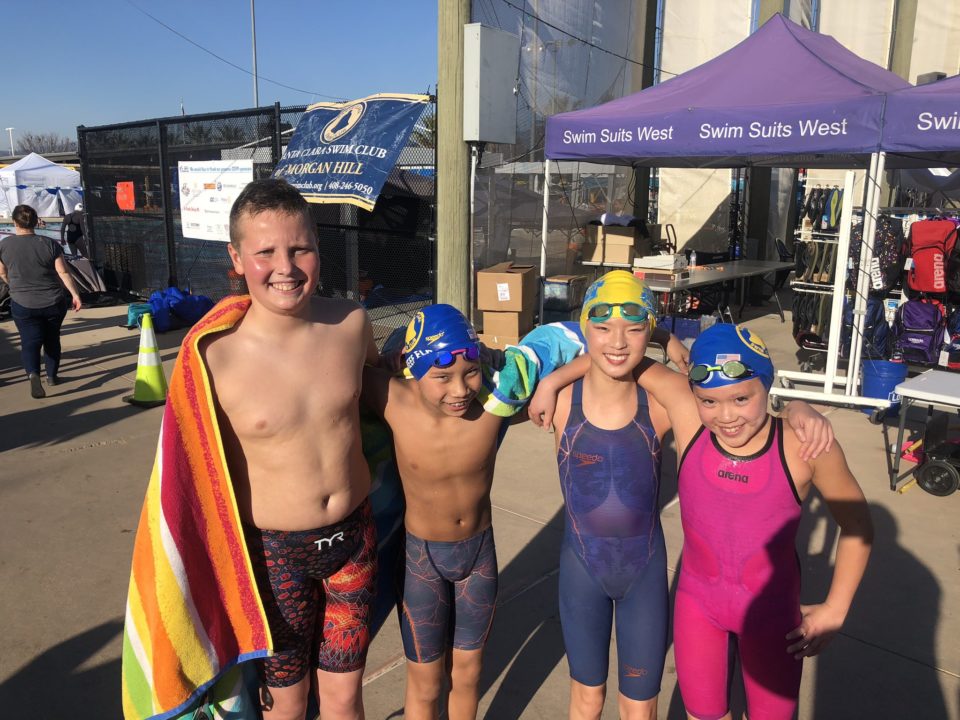 A group of 10 & unders from the Santa Clara Swim Club in California has broken their own National Age Group Record in the mixed 200 yard medley and freestyle relays.

The relay’s butterflier, Isabel Wu, made the biggest cut into the record-setting line, dropping half-a-second from her split in December.

*The meet did not use touch pads, so the splits for the new relay are based on the coach’s watch.

In the mixed 200 free relay, the same quartet combined for a 1:49.51 that broke the old record of 1:49.76 that was set by the Westfield YMCA at a meet in New Jersey last November. The old New Jersey quartet of James Kavanagh, Olivia Constable, Sofia Sutter, and Julian Stewart.

* – Split based on coach’s stop watch

The Santa Clara 10 & under age group is coached by Mark Taliaferro.

Starting Sept 1 those kids won’t be allowed to wear tech suits… get those NAG while you can!

Don’t worry, a new technology & marketing war is on the horizon, and the suit companies will find ways to make ever faster and more expensive suits that comply with the new rules.

It looks like from the video that the swimmers are wearing tech suits. I thought they were banned for 12-unders.

That ban goes into effect USA-Swimming-wide on September 1, 2020. Certain LSCs have implemented the rule early, but not all of them.