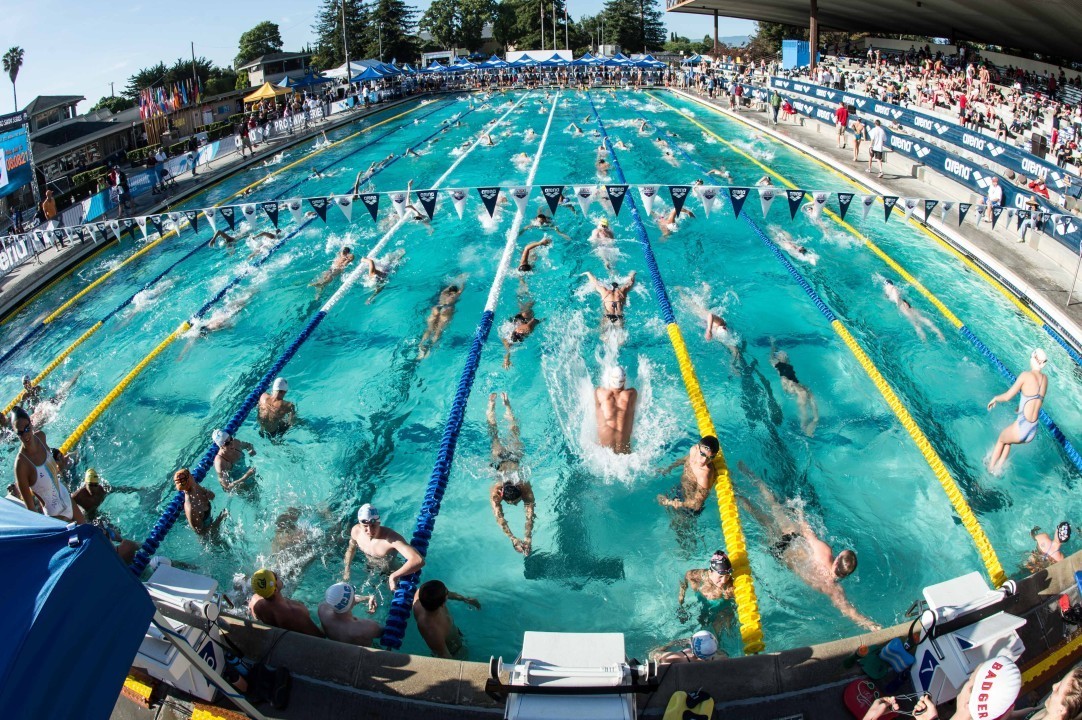 USA Swimming has released it's list of the top 50 swim cities in 2016, with the San Jose-Santa Clara metropolitan area earning the #1 rank. Stock photo via Mike Lewis/Ola Vista Photography

USA Swimming has released it’s list of the top 50 swim cities in 2016, with the San Jose-Santa Clara metropolitan area earning the #1 rank according to a study commissioned by USA Swimming and Speedo. The Area is home to Team USA standout Maya DiRado, a 2016 Rio Olympic gold medalist, and the Santa Clara Swim Club, whose swimmers have won 80 total Olympic medals.

Ann Arbor, Michigan had previously held the #1 rank for back-to-back years, but wound up 2nd this time. Also ranking in the top 10 for the 3rd-straight year were Austin, San Francisco, Raleigh, Fort Collins, Bridgeport, and Madison.

“The swimming community is unlike any other, and I know that the support of my teammates and coaches, and the close bonds we developed during training, have inspired me to achieve at our sport’s highest level,” said four-time Olympic medalist and Team Speedo USA athlete Maya DiRado. “I understand firsthand the impact these swim cities have on individual swimmers – from elite athletes to those just beginning their competitive careers – and hope this survey and my USA teammates’ performances in Rio inspire more people to get in the water.”

Santa Clara Swim Club is one of the most successful swim teams nationwide, with its swimmers winning 80 Olympic medals, including 51 gold, 17 silver and 12 bronze, during its proud history. Swimming legends Mark Spitz and Donna de Varona also grew up in the area.

“It is a great honor for San Jose-Santa Clara to earn recognition as America’s Top Swim City. Aquatics has a deep history here, and the passion and commitment for aquatic sports is really a fabric of our community,” Santa Clara Swim Club Head Coach John Bitter said. “Our future is incredibly bright, including the new Haines International Swim Center, and our outstanding partnership with the city of Santa Clara will lead to more successes for America’s Top Swim City in the future.”

California (eight cities in the top 50 spots) and Colorado (four in the top 33) were the highest-ranking states.

“The top swim cities exemplifies all the qualities that make the sport of swimming great, with strong community involvement, ease of access and ability to grow the sport,” said Matt Farrell, Chief Marketing Officer for USA Swimming. “We want to invite people of all ages across the country to join the sport of swimming, and we hope this list inspires more kids and families to get involved.”

Each city’s ranking is based on an aggregate score in categories including percentage of active swimmers and swim clubs, swim team growth, number of accessible pools and volume of top-level swimmers from the area. Cities in the top 50 had an MSA population of 250,000 or higher.

“Speedo USA is committed to creating products that help all athletes achieve their goals in the water, and we are thrilled to see the impact these communities have in supporting that same mission,” said John Graham, Senior Vice President of Sales of Speedo USA. “From swimming competitively or for fitness, or taking vertical workouts to the pool, the results of this survey show that more people and cities are embracing the power of water.”

Other notable facts about the cities ranked 2-10 include:

The ranking index was developed through a comparison of each city’s swim-related attributes relative to the overall U.S. population. Key elements included the number of current USA Swimming members; new member growth; number of USA Swimming clubs and club excellence. The study also looked at the number of qualifying swimmers for high level competitions like the Speedo Sectionals, Speedo Junior Nationals, Phillips 66 National Swimming Championships, Olympic Trials and the Olympic Games; as well as Sports & Fitness Industry Association (SFIA) participation data, including the number of competitive and fitness swimmers, and the number of swim facilities open to the public in each city. USA Swimming National Team members were assigned to their hometown club, if different than their current association.

The complete list of the 50 Top Swim Cities can be found at: www.usaswimming.org/50TopSwimCities. To find out more about swimming and access resources to locate a nearby swim club, go to: www.SwimToday.org.

The research study was commissioned by USA Swimming and Speedo USA in partnership with SRi and Sports Marketing Surveys, the official research provider to the Sports & Fitness Industry Association. Swim facilities data is provided by SwimmersGuide.com, the world-wide swimming pool directory website.

Yes the pools in SF are ok…. but, the congestion, dirt, cost of the city nullify the attraction of the pools.
Austin TX has fresh water spring fed 70 degree pools (yum fresh!) and Lake Travis with it’s 65 mile “lap lane”.

Anchorage is 18th. We have only a handful of pools open year round, all but 1 are kept at 85 degrees, and the last 2 high schools built don’t have pools so teams have to bus to practice every day at odd hours.

Interesting. I would point out that only tracks USA Swimming participation. In the area in which I live, Contra Costa County, there are over 6000 rec league swimmers. Yes, 6000, and I think I’m conservatively low with that number. The vast majority are not members of USA Swimming and thus, invisible in this survey

Missy Franklin swims for the Stars in Southeastern Suburban Denver which is not even near Ft. Collins. She falls under the #15 city on the list. It seems that there is a fair amount of reaching in this article.

Should use number of age group swimmer as criteria. Should not use college team’s success as criteria.

Maya DiRado is from Santa Rosa, CA not Santa Clara as is her Olympic Teammate Molly Hanis.

Not that closed to San Francisco-Oakland, it the university of Berkeley only. Santa Clara is not far from Stanford, which is why they are in the ranking.

I mean Santa Rosa is not that closed to San Francisco and Oakland. Berkeley is close.