Sam Stewart Moves into 8th in World Rankings with 1:57 IM in College Station 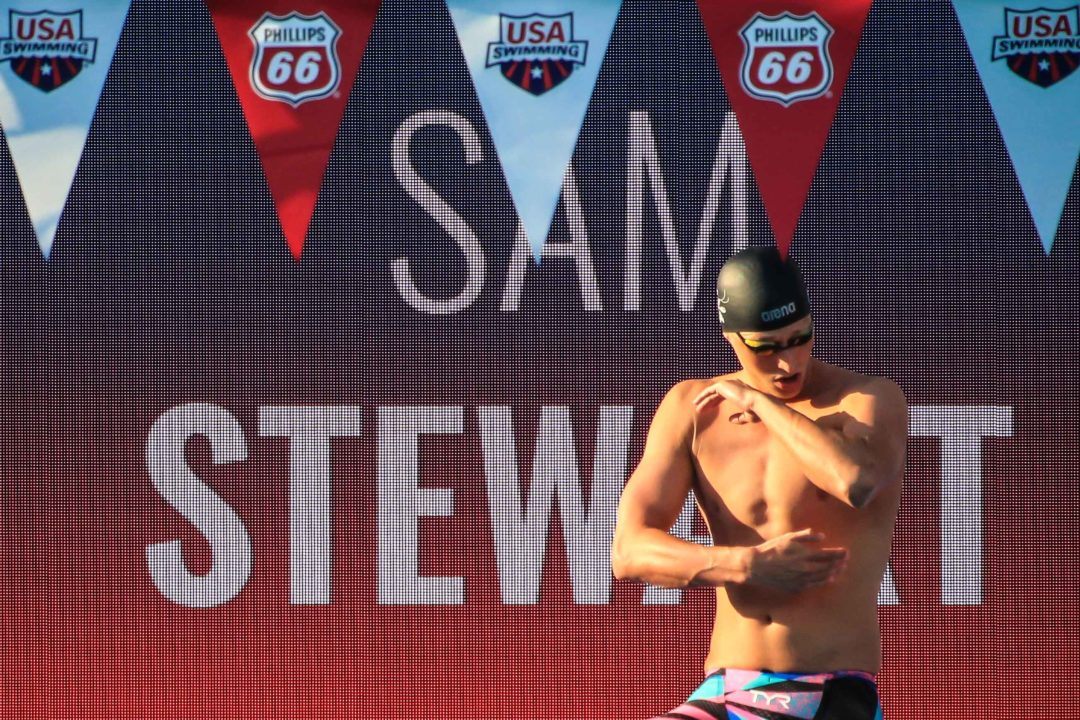 An already-crowded U.S. men's 200 IM field got even more crowded on Sunday when Sam Stewart swam a 1:57 at the College Station Sectionals. Archive photo via Jack Spitser/Spitser Photography

Former Texas Longhorn Sam Stewart punctuated a successful weekend at the College Station Sectional Championships on Saturday with a 1:57.76 to win the men’s 200 IM. That knocks more than a second-and-a-half off his previous lifetime best of 1:59.45, done at Summer Nationals in 2018, and jumps him into 8th place in the world rankings this season.

That swim also makes Stewart the 3rd-ranked American in the 200 IM this season. A repeat of that time for Stewart at this summer’s U.S. Olympic Trials will likely earn him a spot in finals, at a minimum. Last season, it would have tied him with Ryan Lochte as the 4th-fastest American in the event, which would put him within striking distance of making the Olympic Team.

13-year old Hannah Marinovich from the Clovis Swim Club, who on Friday became the youngest qualifier for the 2020 U.S. Olympic Trials with a 2:29 in the 200 breaststroke, picked up her first win of the meet on Saturday. There she swam a 1:11.51 in the 100 breaststroke. That leaves her about half-a-second short of a second Olympic Trials cut, but makes her the 7th-fastest American 13-year old in the history of the event (she’s the fastest ever over 200 meters).

Marinovich swam a 1:03.13 in prelims of the 100 breaststroke, in yards, which was also a lifetime best for her.

Making a surprise appearance this weekend is former Texas A&M swimmer Canadian Kyle Troskot. On Sunday, he won his best event, the 50 free, in 23.14. Currently working as a volunteer assistant at TCU, swimming Canada doesn’t have any registered meters swims for Troskot since last July, though he did swim a modest yards meet in February (20.52 in the 50 free, 1:55.69 in the 200 free).

His 23.14 on Sunday was short of his best time of 22.77, but does already almost match his time from last April’s Canadian World Championship Trials. He’s the 9th-ranked Canadian in the men’s 50 free this year.

psych sheet is out for Des Moines. All his competition except Carson is racing next weekend.

That just made Carson’s path to the Olympics harder. I personally hope Carson does make the team tho

Carson has been faster at 17…

@pvdh ok? so had lochte basically. he’s still a factor

the 200 IM has quickly become one of the to-be most exciting races of the olympic trials. predictions should be made henceforth with a grain of salt

Yeah, but he did a semifinals simulation. smh

I rather worried about Chase actually.

This guy goes 1:57 and people are worried for Carson now. Lochte went 1:57 with no training now let that sink in…… For a minute

They all have different things going for them. Carson has youth and raw talent, Lochte has the experience, and Stewart has the momentum. None of those things should be undervalued.

Pretty sure Lochte has plenty of raw talent as well!

He claimed he was in great shape in the fall with the photoshopped picture and then Carson easily beat him in December. I guess we can see where he is at next weekend

Lochte’s in season swims have never been an indicator of where he ends up at the end of the year. I wouldn’t read into them at all; we’ll have no idea how he’ll perform at trials until trials.

Hey y’all, Carson ain’t ready for the Olympics. Please stop putting so much pressure on him.