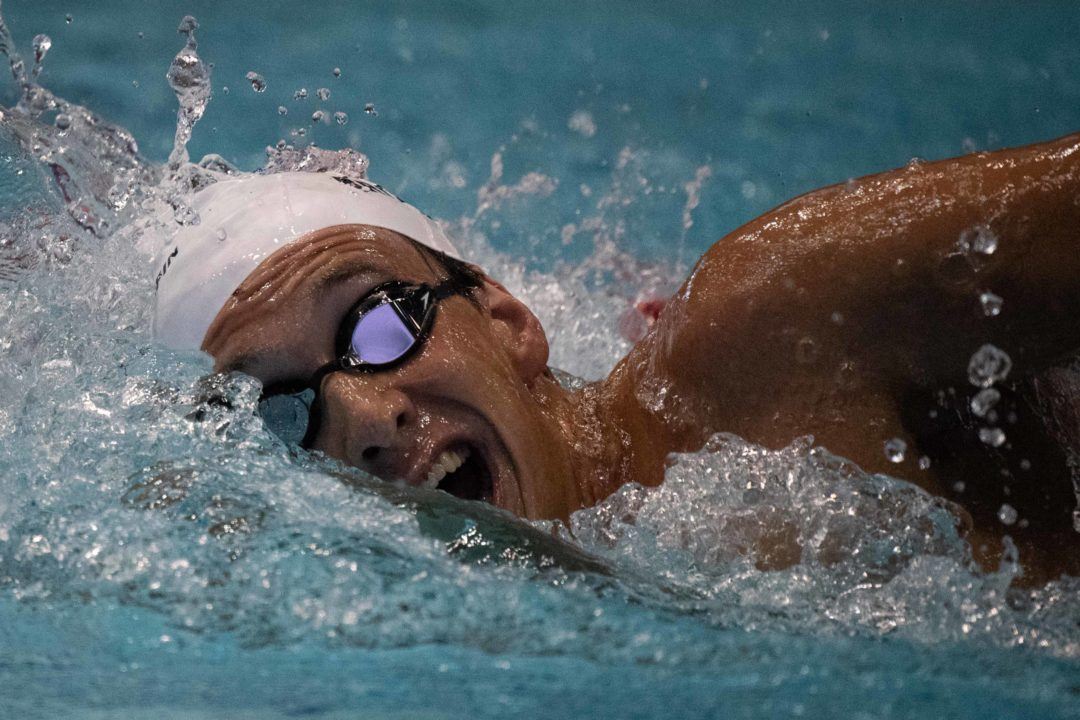 US National Teamer Michael Brinegar (above) swam an 8:03 to win the men's 800 free on Thursday in College Station, Texas. Archive photo via Mike Lewis/Ola Vista Photography

Like many meets in the Olympic year, the spring edition of the 2020 College Station Sectionals, normally a yards meet, will include short course yards preliminary races and long course meters finals races. This gives swimmers a chance to both test their short course tapers and chase Olympic Trials cuts in long course in the evening session.

Most of the top seeds from Texas teams at this meet are coming off the Texas High School State Championship meets that wrapped 2 weeks ago. They will be joined by visiting teams from around the country, including most notably Loveland Swim Club in Colorado, the Mission Vid\ejo Nadadores, PASA, Clovis, and AquaDart swimming in California, and Crawfish Aquatics in Louisiana.

The Texans held serve in the opening race of the women’s meet, with 16-year old Clare Vetkoetter from Texas Ford Aquatics winning the 1500 free in a new best time of 16:58.85. Her 6 second drop in that race left her short of the Olympic Trials standard.

The Mission Viejo Nadadores have one of the best distance freestyle training groups in the country, and they demonstrated that on Thursday in College Station via a 1-2 finish from Michael Brinegar (8:03.34) and David Heron (8:07.11). Both members of the US National Team, Brinegar is currently on a redshirt season from Indiana to train for the Olympics while the 24-year old Heron is pivoting as a pro from open water, where he raced at the World Championships but missed Olympic qualification, to the pool.

That swim for Heron is within a second-and-a-half of his lifetime best.

The top junior finisher was 15-year old Levi Sandidge from City of Richardson in suburban Dallas. He placed 3rd overall in 8:21.08, improving his best time by almost 12 seconds.

Katy Aquatics won the men’s 800 free relay in 7:37.57 with a relay of four high school-aged swimmers. Their splits:

Austin-based Longhorn Aquatics finished 2nd in 7:38.77. That included a 1:49.90 leadoff split from Coby Carrozza – just 3-tenths away from his personal best done at Summer Nationals in August.