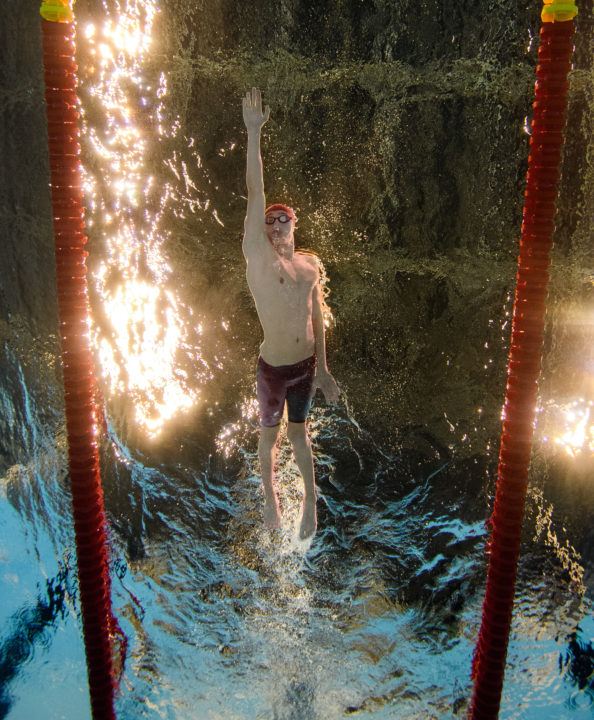 Hynd, a Paralympic champion, has gone from S8 to S9, then back to S8, then again to S9 in a matter of months. Archive photo via Bob Martin

For the third time since March, Great Britain’s Ollie Hynd has switched classifications.

Hynd, 23, was the 2012 and 2016 Paralympic gold medalist in the SM8 200 IM, and also won the S8 400m free in Rio. At the Denmark Para Swimming World Series stop in late February, he was reclassified as an S9, meaning he would be racing less impaired swimmers than he previously did. At the time of the initial reclassification, Hynd released a statement saying he was “heartbroken and confused.”

However, in June, he successfully appealed the reclassification and was moved back to S8 for the time being, with the caveat that he would undergo further testing at a future time.

Hynd went back through review before competing at the 2018 Para Swimming European Championships in Dublin this week, and was once again moved to S9, SwimSwam confirmed.

A spokesman for British Swimming gave the following statement:

In February 2018 Ollie Hynd went through a classification review as part of the IPC’s ruling that all para-swimmers with a physical impairment must undergo a review of their international classification.

The outcome of this review meant Ollie was reclassified to S9, SB8, SM9.

Feeling the classification had not been processed in accordance with the rules and regulations, Ollie, with the support of British Swimming and the British Paralympic Association, lodged an appeal to the IPC’s Board of Appeals for Classifications.

The BAC panel upheld Ollie’s appeal meaning the February review result was set aside and he was required to go back through a review before competition at the Dublin 2018 European Championships.

From this new review Ollie was allocated the classifications of S9, SB8, SM9.

British Swimming strongly supports a fair and transparent international classification process and thanks everyone involved for their vigilance and professionalism around this sensitive issue.

In late 2017, World Para Swimming announced that it would implement a new classification process, which took effect January 1, 2018 – all athletes are required to undergo a new classification test in 2018 (with the exception of a few special cases, which can be found here). This new process is meant to combat intentional misrepresentation (IM), which occurs when an athlete intentionally makes their impairment seem more severe in order to be put into a lower disability class.

Under the new system so far, an inordinate number of athletes, some more high-profile than others, have been reclassified – both up and down. You can read more about the chaos here.

Slower times after being classified what’s he looking for now the sympathy legal appeal.
His mother on one of her social media forums has said she wishes she could tell the world the truth.

The sad fact is when he swam as an S8 he was a good 15/20 secs faster than most but now he has to compete against S9 he suddenly swims slower and no longer the top dog.

Well he has two choices now, suck it up and crack on or throw another tantrum and walk away.

Unfortunately and sadly Mark, in the world of Para-swimming, cheats and frauds do PROSPER!!!

It would be a step forward for the para swim community if he would just accept the decision and keep swimming.

Bit of a wrinkle. WPS did not change Hynds classification from S9 to S8 following his successful appeal. He remained as S9 in their database and he competed as S9 @ WPS World Series Sheffield posting 100fr 1.01.66. His time, as an S8, would have put him 2s behind the Aussie S8 59.74 got the season so far.
BPS thanks everyone for their ‘vigilance’ and ‘professionalism’ in this ‘sensitive’ issue and, they lodged an appeal based on ‘feeling’ and Hynd releases a media statement? As usual, clear as mud. Whether you like the guy or not, his reclassification from S8 to S9 is very interesting and an explanation from WPS outlining the reason behind the different result would make… Read more »

People should understand how it works by now. Previously the athlete was put on an exam table and given various tests for mobility, muscle power or coordination and this point total was 280 points and then there was 10 points for starts and 10 points for turns. So the total possible score was 300 and the classifiers also observed them swimming and had the option to adjust the scores and I think they rarely made these adjustments thus the athlete could control their score easily on the bench test by not trying at 100% of their ability. Under the new system the bench test is only 140 points and now the swim test is 140 point and the swim test… Read more »

And that hand is the most ridiculous thing I have ever seen – very “unique” sign of CP.

Pattersons athlete fb page hasn’t been updated since day3 Para pan pacs and one of her latest Instagram pictures is a zoomed in one of her clawed left hand touching a turtle .. look but don’t touch springs to mind! She can post & delete as many pictures of that left hand as she likes, there’s evidence aplenty that it’s nothing but a scam and that she’s not the only one involved. Technical testing – agree it isn’t clear, its subjective and I would think therefor still open for abuse. An athletes classification should be filmed as standard and referenced during the competition and after if needed. Some useful work there for Spence’s massive media department! Konkoly & Griswold –… Read more »

Lakeisha Patterson should be given the academy award for the world’s best fraudulent cheat in Para-swimming, also given the Nobel Prize for being the world’s best pathological liar in language and literature. This despicable woman is in the same class as world cycling’s Lance Armstrong!!!

It’s disappointing to see para swimming turn into classification chaos. It’s no longer about the swimming and if someone swims a fast time it’s automatically questioned. It’s sad that the sport has come to this. The cheating is clear as day yet no one cares except for the swimmers who are affected. One day classification drama will explode at a meet and I’ll be there to watch it lol.

Day5 of competition – Kearney is put back to S5, and of course is on the dias. Day5? Where is the explanation for that? And Tai competing as an S8 quite frankly is just down right embarrassing.

They moved an Italian teenager down to S5and he broke Dias’ world record in the 50free today. Doesn’t seem right but I don’t feel like looking any further into the matter

You’re happy to comment on everyone else TAA. But the Italian S5 you can’t be bothered to do the research. Each classification has a higher and lower limit to the points system. Perhaps you should all read the manual, You may then be slightly better informed!!

Dystonia. Question: does Dystonia genuinely produce such wildly fluctuating results – both negative and positive because she improves after each and every classification yet deteriorates during classification. And if it does, should it be classifiable?

Shelby newKirk has dystonia and she has the same problem swimming during classification. To me you just have to try to completely ignore these swimmers cause how do you know what is really going on with them. Leanne smith is another who seems to wildly fluctuate

Unfortunate though the swimmers coming 4th in competition behind them and missing out on teams because of this wildly fluctuating Dystonia is going find it hard to just ignore them. In contrast, the IPC are managing perfectly well. Farcical.
Abigail Tripp is another Dystonia newby
https://www.swimming.ca/en/news/2018/08/03/commonwealth-medallist-adapts-to-new-training-after-dystonia-diagnosis/

Tully Kearney, well dont get me started on her. If her disability is fluctuating that much that she goes from a 9 down to a 5 she should not be classified at all until she stabilises.

As for Lakeisha Patterson, the sooner this fake is removed from para swimming the better. Australia should be… Read more »

I don’t think Tai is in the correct class and she doesn’t seem to think she’s in the correct class. I don’t necessarily see anything at all wrong with her posting some pictures without her crutches etc., she’s a young woman, but I could be wrong. If she were to post pictures wearing shoes like Patterson – anything from flip flops/jandals/thongs to high heeled dress shoes – then I’d be more concerned. Having said that, in my opinion, British Swimming also manipulate the rules and abuse swimmers for medal and funding purposes. The IPC watch on like a toothless tiger whilst the tail wags the dog.

Sarah, regarding your comment on Lakeisha Patterson. Here’s a statement, in part, from IPCs Peter van de Vliet.
“The IPC has the right to withdraw and review any athlete at any time in any sport if their classifiers see fit.” The Paralympic movement’s leading authority on classification, Peter van de Vliet, admitted athletes “inherently push the boundaries” to force their way into classes which give them a greater chance of winning gold medals, but insisted that “no evidence has been found of cheating. Over the last few months we had a lot of allegations made. We took everything seriously and we found that the classifications are valid. Classification is unique to Paralympic sport but it is crucial that the… Read more »

Sarah, as previously stated; Lakeisha Patterson should be given the academy award for the world’s best fraudulent cheat in Para-swimming, also given the Nobel Prize for being the world’s best pathological liar in language and literature. This despicable woman is in the same class as world cycling’s Lance Armstrong!!!