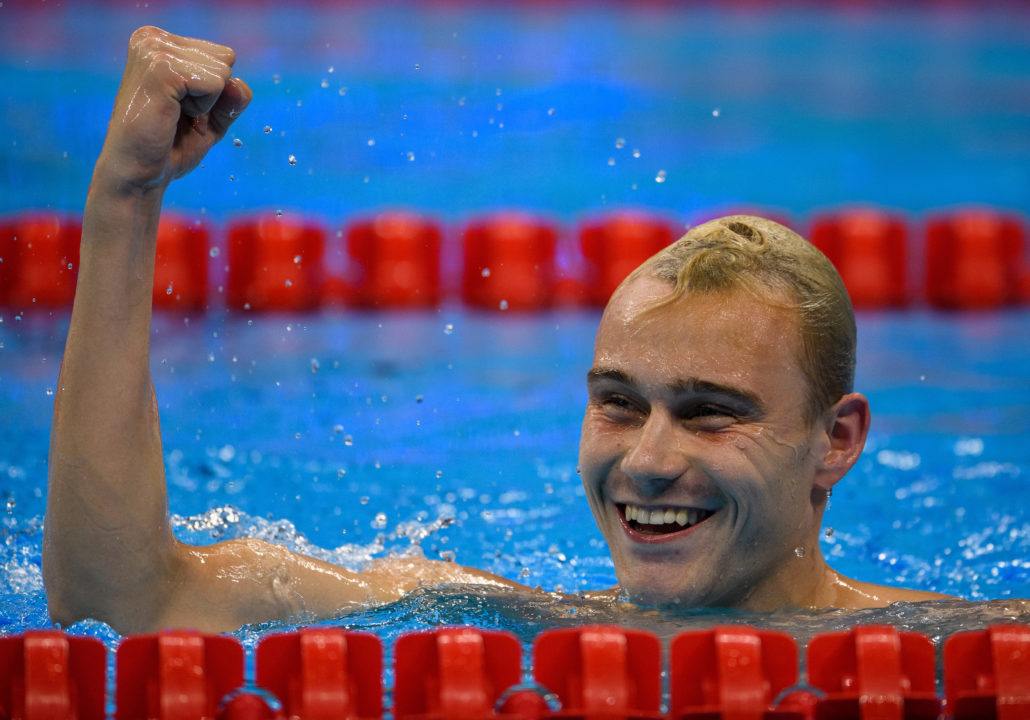 2012 and 2016 Paralympic champ Ollie Hynd is once again an S8 – at least for now. Archive photo via Bob Martin

Paralympic gold medalist Ollie Hynd, who in March was classed up from S8 to S9 at the Denmark World Para Swim Series stop, has successfully appealed his new status and will return to S8 – at least for now.

Following his reclassification in March, Hynd released a statement saying that he was “heartbroken and confused.”

Following the re-classification of Oliver Hynd MBE from S8 to S9 in freestyle, butterfly and backstroke at the World Series Para Swimming event in Copenhagen, Denmark, in March 2018, Hogan Lovells and Chris Stoner QC lodged an appeal on Ollie’s behalf on the grounds that the re-classification process was deeply flawed. This was upheld by the independent appeal panel on 4 June 2018. Ollie’s comments are below.

“I am really pleased that the appeal panel listened carefully to my concerns over the way my recent re-classification process was handled. The last couple of months have been incredibly stressful. I am relieved and delighted at the outcome, and I would like to thank Chris Stoner QC and Hogan Lovells for their fantastic support throughout my appeal.

To be clear, this has never been about classification itself: I understand that the process is complex, that it will change, and that it is in place to protect all para-athletes and maintain the integrity of the sport. Having said that, classification assessments must be conducted according to established protocol and guidelines. We all overcome daunting physical and mental obstacles and train incredibly hard to compete – a level classification playing field is the least we can expect.

I can now stop worrying and really focus on my training. Winning gold medals in Tokyo is still the goal.”

With the appeal being decided in Ollie’s favour, he will now undergo a further classification review, but we are still awaiting the full outcome from the IPC’s independent panel as to what form this will take.

Ollie is currently at training camp out of the UK until 9th July and is focused on the competition circuit that will take him towards yet another successful Paralympic Games.

This announcement came on the same day that fellow Brit and Paralympic champion Matt Wylie announced that he would retire from the sport after being classed up from S9 to S10.

As 19 Eleven stated, there is potential that Hynd could be classed up again after a further IPC review, but for now, his S8 appeal will stand. The reversal is particularly interesting because when the initial reclassification came to light, British Swimming reportedly protested, but the S9 ruling was upheld at that point. SwimSwam has reached out to Hynd’s representatives for details on the process.

In late 2017, World Para Swimming announced that it would implement a new classification process, which took effect January 1, 2018 – all athletes are required to undergo a new classification test in 2018 (with the exception of a few special cases, which can be found here). This new process is meant to combat intentional misrepresentation (IM), which occurs when an athlete intentionally makes their impairment seem more severe in order to be put into a lower disability class.

Under the new system so far, an inordinate number of athletes, some more high-profile than others, have been reclassified – both up and down. You can read more about the chaos here.

American Robert Griswold (also an S8) has also been classed up and then back down again under the new system, though Griswold’s change was more immediate.

Thanks SS for highlighting this. Why haven’t the IPC or WPS published this decision? Their rules. I’m glad in a sense that Hynd (British Paralympic Association) appealed his classification outcome (he underwent two classifications in Copenhagen, that’s 4 classifiers) and was successful. However, it seems to be a rather huge statement for something that in essence is only his S8 classification being reinstated due to procedural errors. What will be huge news is if, at his next classification prior to European Championships – which he was selected for without qualifying, he remains classified as S8. That will throw a rather large question mark over the whole classification process once again and perhaps highlight some of the flaws within BPA that… Read more »

The guy is trying to win gold medals in the court room instead of the pool. I really hope they make him a nine. He is too fast to be an 8 and I think it’s arrogant of him to believe that’s where he really belongs. Until everything is published in the open I am sticking to that belief.

You can’t just exclude someone on account of being ‘too fast’.
If they have a recognized medical condition, a level of impairment deemed appropriate for that class, and they work their butt off to be #1.. everyone else needs to just suck it up and work harder themselves.

Hynd had grounds for a successful appeal and won. So the Classifiers are at fault here for failing to perform their jobs properly and it has nothing to do with IM, arrogance or being ‘too fast’ for your liking.

The classifiers have failed to do their job competently in many many classifications. Hynd talks about being “heartbroken and confused”. He is certainly not the only one with a degenerative condition to have been classed up and there are many genuine athletes who have also been devastated by these inept classifications, the only difference being that Hynd has made public statements and is one of the few to have the support of his NGB. The rest just walk away completely disillusioned, feeling abandoned by those who have the power to assist them. If the classification system was robust and transparent as the IPC claims, NO athlete with a degenerative or stable condition should ever be classed up. The fact that… Read more »

If you are classified for a neurologilical condition the best indicator of your impairment is your speed. Two panels agreed he was an 9 under the new rules so tell us what was done wrong that he had grounds for an appeal? Classification is nothing more than an opinion or an educated guess. Why doesn’t he respect their opinion or he doesn’t think the rules apply to him because he is above everyone else. Funny that Great Britain has “people” monitoring these threads same as the Wylie thread I get an immediate response but when it comes to meaningful dialogue on the sport these people are nowhere to be found.

Hynd has been an ambassador for the law firm that represented him, Hogan Lovell, since 2015. Hogan Lovell also represent the British Paralaymic Association – since Beijing 2008 and leading up to Tokyo 2020. A conflict perhaps? Appropriate? I believe the appeal process is necessary should the ‘volunteer’ classifiers not follow due process, he’s certainly not the first to appeal classification outcomes. It’s not difficult to read the classification manual although now it’s very difficult to determine what should go where, probably deliberate. What I don’t believe though is that the ‘volunteer’ classifiers only failed to do their jobs correctly in Hynds classification and no others. Lack of transparency, clarity, favouritism as always. I also don’t understand why Hynd felt… Read more »

IPC Swimming has never worked well for CP’s or other neurologicial concerns, partly because it is subjective, partly because the classifiers assume everyone is indulging in IM and partly due to the arrogance of classifiers thinking they know best. In my opinion the only way to do this fairly is to reduce the whole process to purely medical, then better technique is rewarded with better results.

Seems his grounds for his appeal were based on nothing except his sulking, he has rightfully been reclassified S9 and yet again his times have gotten slower