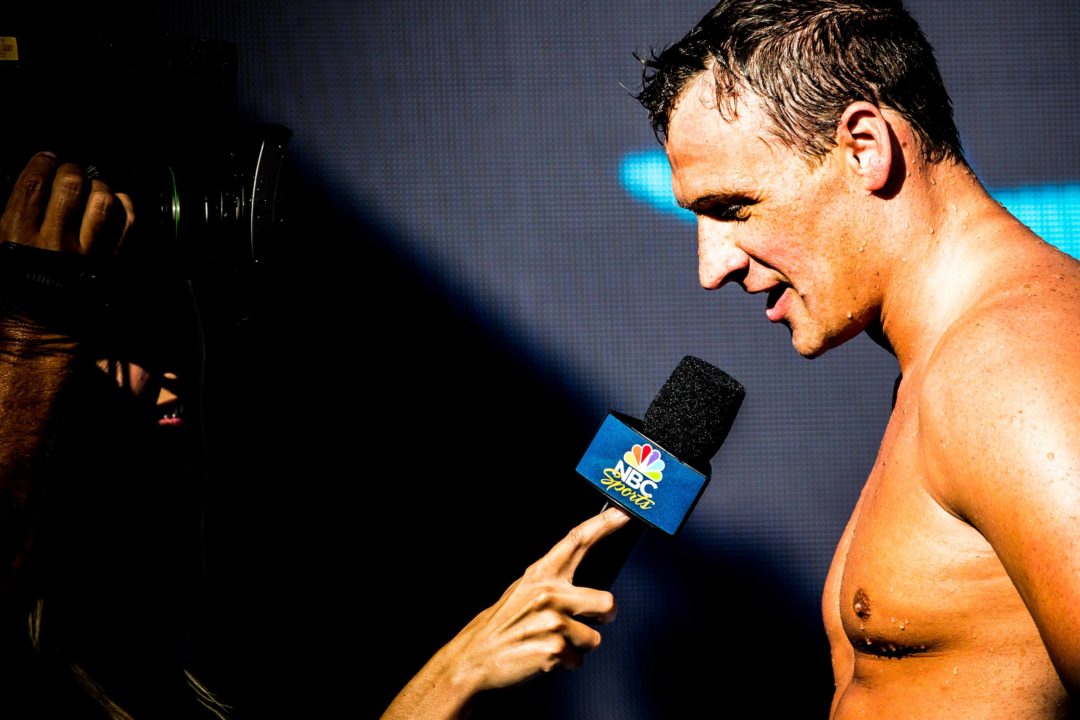 Ryan Lochte will appear on Alex Rodriguez's mini-series "In the Game" to explore his financial rehabilitation after several post-Rio missteps. Archive photo via Jack Spitser/Spitser Photography

The appearance will be the latest for Lochte in a national television tour as he works to rehabilitate his image following a number of post-Rio Olympic Games embarrassments including a dustup at a Rio gas station and a 14-month suspension for an anti-doping rules violation.

In a clip posted on the CNBC Prime Twitter feed (CNBC Prime is the branding for the channel’s prime-time television), Rodriguez presses Lochte on the fact that his apologies weren’t good enough. The episode becomes even more interesting now that Lochte and Rodriguez, who had his own issues with performance enhancing drugs as an athlete, have developed a close friendship in the recent years. That includes Rodriguez paying Lochte a $15,000-per-month fee to create content for fitness companies that Rodriguez has invested in.

The episode will air on Wednesday at 10PM Eastern Time. It is part of a 4-episode series where Rodriguez enlists entrepreneurs and other experts and connects them with professional athletes and entertainers who have fallen upon serious financial distress. The Lochte situation is based upon the number of sponsors that he’s lost over the last 3 years.

In 2019, Lochte has also made notable television appearances on Today and on the reality television series Celebrity Big Brother. In his first meet back from suspension this summer, Lochte became the US National Champion in the 200 IM, and has since lost 21 pounds.

Turns out, a bad apology is even worse than not apologizing. Tune in for more hard truths from @AROD on an all new #BackInTheGame TOMORROW at 10P ET on CNBC! #HardTruthTuesday pic.twitter.com/7k2YOEoP2a

Someone just please tell him

I believe the best way he can repair his image is to swim fast this year. Sometimes you can only focus on the future because it is impossible to change the past. When people reflect on Phelps’ career, they focus on the comeback rather than his drug use or drunk driving. Lochte could do the same for himself if he keeps his head down and swims the right times.

I think his image is doing fine. People realize that the Rio incident would be sports section news in today’s news cycle and a half-*ss apology is still way better than all the vitriol, bullying, and lying we see now. Two DUIs, one a felony DUI charge, still trumps by light years anything Lochte ever did. And that dude carried the flag in the opening ceremony.

Lmao 😂 you have the bestest hashtags in the world, big beautiful smart hashtags, all of them. Huge hashtags you might say even

Many people are saying that.

“That dude” did more than say I’m sorry. He realized he had some serious issues and addressed them. He is still addressing them. Lochte’s big problem is his finances. In the CNBC interview he says he blew through the millions he made, that he’s left with 20,000 in the bank. His financial advisor should be fired.

There’s no comparison between the two as people. Their only similarity is their swimming talent. Phelps is a statesman who comfortably dines with presidents and kings without embarrassing himself. He’s on the other end of the spectrum.

Well if he “comfortably dines with presidents and kings,” knowing what we know now about how that goes, that’s not exactly a character endorsement. At least that’s what many people are saying.

Another immeasurable difference between the two is that Phelps stepped up and owned his mistakes. He openly took responsibility without hedging or blaming someone or his circumstances. There is no better or more appreciated story than redemption. We universally relate because we all need it because we all fail and fall down. Redemption stories give us hope that we can overcome and triumph and not be forever defined by our mistakes. Phelps has also made himself vulnerable by sharing his personal struggles with depression. Raise your hand if you are willing to reveal your weaknesses to the whole world. There’s always the possibility of redemption, but not without owning our mistakes.

Funny how copping to a plea deal to get a felony DUI charge reduced (second DUI, and after the bongo photo flap) provides the necessary encouragement to own up to one’s mistakes. Almost made for TV. Oh wait. It was. The redemption story was the entire marketing strategy going into the Olympics.

Perhaps if you had a relative who tried to drink his way out of depression you may feel differently. Phelps did help out Grant Hackett. I wonder about Lochte. He seems to have some problems with alcohol (the hotel incident) and his dad has a dui. Hope he’s avoiding that road. People think they can quit on their own, but they’re just a dry drunk.

I think they are both terribly flawed people and awful examples for kids in the sport.

He’s not afraid of publicity! Nice guy though hope it goes well, in and out of the pool