Ryan Held Sheds Tears of Joy For All Americans 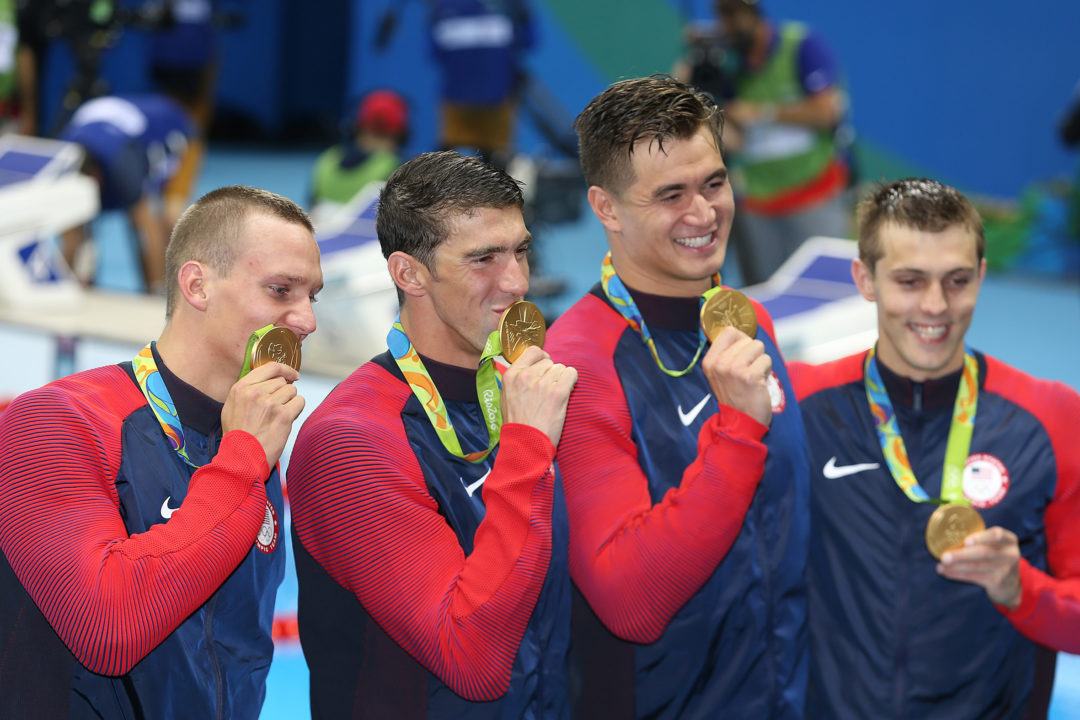 There he stood, the shortest of the four guys and the one who had to earn his way to be with the other three.

There he stood, Ryan Held, with his right arm and hand across his heart, wearing the red, white and blue warm-up uniform colors of the United States Olympic Swim team.

There he stood, crying, rubbing his tear-filled eyes, leaning his head down. The North Carolina State student was overwhelmed by the magnitude of the moment. And so were so many Americans watching him.

This could be the only time in his life he would stand on the highest podium listening to the national anthem of the United States honoring him and his teammates.

There he stood, next to Michael Phelps, the greatest swimmer the world has ever seen. Phelps, seeing his teammate overcome with emotion, patted Held on the back and rubbed the back of his head to let him know it’s perfectly fine to cry at moments like this as Phelps had many times himself.

It was the 19th Gold Medal for Phelps. It was the first for Held.

These two guys, along with Caeleb Dressel and Nathan Adrian, had just won one of the most prestigious and important races in the Olympic Games, the 4 by 100 freestyle relay.

This a race about all-out speed. No frills. No fancy strokes such as butterfly. It’s steak and baked potatoes, swimming at its core taken back to its most basic roots. There’s only one rule: Dive in the pool and blast ahead doing freestyle. It’s a lifetime of effort distilled to less than 50 seconds of crazed racing by each of four guys, one at a time, countries versus countries – with nothing less than everything on the line.

See how fast you can go. Do not pass go. Do not collect $200. Just go. And go really, really, really fast. This is not a technique race; it’s all heart, desire and courage. It raw red meat chased with a shot of Jack Daniels.

Held had swum the third leg of the relay and helped the American team win even though they were not at all clear-cut favorites to win. The Americans were expected to have all kinds of trouble beating the teams from France, Russia, and Australia, each loaded with super-fast, world-class sprinters, wanting nothing more than to beat the USA.

But the Americans did it. And Ryan Held was a key part of it. This is one of those Olympic swimming races that sets the tone for how countries are doing collectively against each other in swimming overall, how well they are progressing as a swimming nation. This is a race for national pride.

Held made us proud.

Earlier in the day there was no way he could have known he would be standing on that podium. He first had to swim fast enough in the preliminary qualifying race for the coaches to consider him for the “A” (fastest) team in the finals later that night.

Impressive in his preliminary heat swim, he was named as the fourth American swimmer on the big finals relay to be held later that night. Imagine that accomplishment in itself, being told by a coach that in one of the biggest races in the Olympics you have been chosen to be one of the four fastest American freestylers to race. Imagine being told you would be swimming on a team with Michael Phelps.

This was pool pressure.

Held was there with the big boys, all-world swimmers Adrian and Phelps. But no matter how fast they swam, they needed Held and Dressel to do their parts to get that Gold Medal back on American turf after missing out on Gold in the 2012 London Olympics – a bitter defeat.

This was the kind of race that the casual swimming fan, or even those who know little about swimming, couldn’t help but enjoy. It pulled you into the drama.

Yesterday most didn’t know Ryan Held. Today they do, and they may remember him along with these three other guys for many years. “Oh yeah,” you can hear people saying years from now, “remember those four American guys who won the relay at the Rio Olympics. It was Phelps, Adrian, Dressel and Held.”

Ryan Held was there, in the pool, blasting through 100 meters of freestyle. He was on the fastest 4 by 100 freestyle relay team in the world.

Making him cry was American’s “Star Spangled Banner” and a Gold Medal and all those thoughts of what it took to get on that podium. So often at the Olympics and in life we see and experience tears of sadness and grief. It is so special and refreshing when they are tears of joy and overwhelming and sudden happiness. I cried when the race ended, and watching him cry on the stand made me very happy for him and our country.

All of this bliss was his — and ours.

There he stood, Ryan Held, an Olympic champion, an American hero, for the rest of his life.

This article is written by and courtsey of Charles Hartley.

Charles, this is a great article. Really well written, descriptive and fun to read! Don’t let the haters change your style. I hope you write more on swimming.

And I would like to add that Ryan Held’s dimples made him all that much more lovable :). Thank you for a great article!

I am so happy for Ryan… Everyone is. It’s great to see a hometown boy win at the Olympics. I can’t imagine how proud his parents are right now. Congratulation team USA.

That’s a wonderful article about a great young man. He’s been on our Springfield Y team for years and is such a good teamate and such a good role model for our young swimmers. As great as he is at swimming he’s even better at talking to the young kids on the team, he encouges them, he plays with them, and he celebrates their success in the pool. He has been fun to watch grow up to be ther person he has become.

Dressel also shed tears while carrying the American flag. Awesome to see these young guys filled with such pride for themselves and their country.

I’ll be surprised if any medal ceremony/anthem moment tops that one for me. It was perfect in every way!

I have to give Simone’s a VERY close second.

0
-7
Reply
Twisting by the Pool

INTERESTED, you are a joyless swimming snob. Go with the flow.