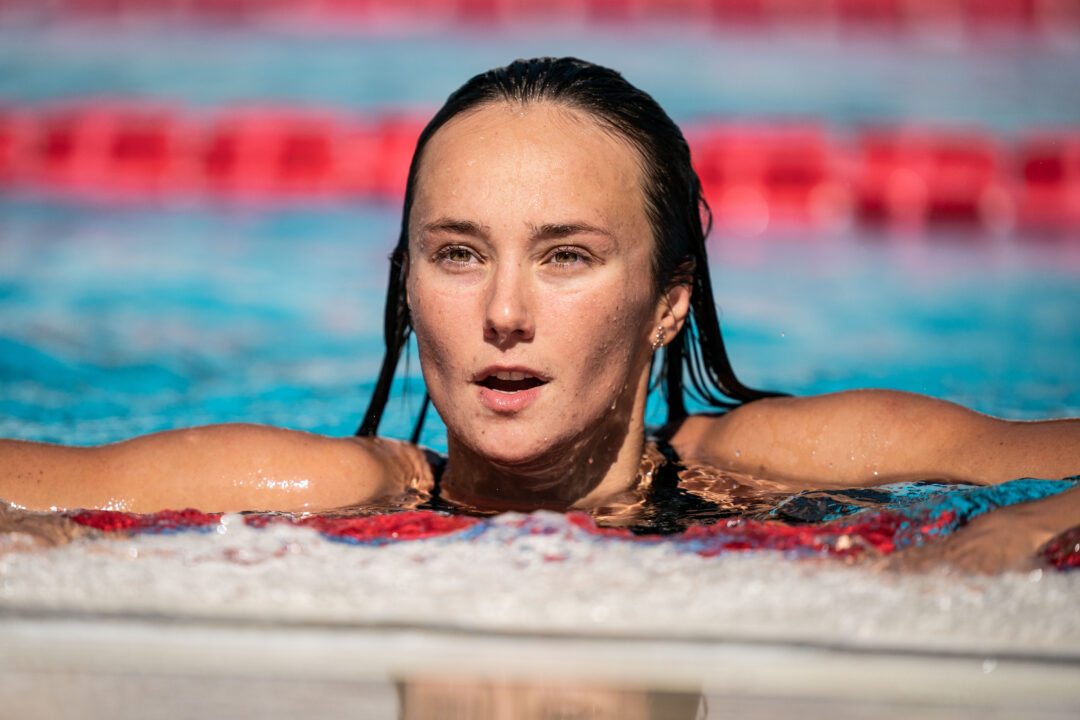 World Junior Record holder Viktoria Gunes posted an image on her Instagram on Friday standing on a Russian flag. Gunes was born in Ukraine. Archive photo via Mine Kasapoglu

She first represented Turkey, under the name Viktoria Gunes, at the 2015 World Championships in Kazan. There, she advanced to the semifinals of the 100 breaststroke.

Several Russian swimmers reacted strongly to the post on their own social media accounts. Russian swimmers have come under increased pressure this week after double Olympic gold medalist Evgeny Rylov appeared at a pro-war rally hosted by Russian President Vladimir Putin last week, wearing the “Z” that has become the symbol of the war for Russia. That prompted a ban on Russian aquatic athletes by a number of organizations that had previously resisted, including FINA banning them for the rest of 2022 (including from June’s World Championships) and ISL team Energy Standard banning them as well.

Among those who reacted strongly to Gunes’ post were her now-suspended Energy Standard teammates Kliment Kolesnikov and Maxim Stupin.

“Where are the boundaries of the permitted behavior of athletes? If you decide that it is humane to remove Russian athletes from participation in international competitions, then take action here as well. Nationalism is UNACCEPTABLE in any form.”

Stupin, who left at least one pro-war comment on Instagram early in the war, shared the same message.

Since Russia began its invasion of Ukraine on February 24, 2022, over 1000 civilians have been killed, according to the United Nations. That is in addition to an estimated tens-of-thousands of deaths of members of the military on both sides.

SwimSwam has reached out to Gunes and Kolesnikov to elaborate on their stances, but neither has responded.

All of this anger over a swimmer protesting and disrespecting the flag of an nation/army that is raping women and girls as young as 10!? Get your priorities straight.

Everyone has an opinion, what are the Russian athletes views on an alleged State Sponsored drug program and that has affected thousands of other athletes?

Who cares…where was this outrage when Russian atheletes were wearing Z’s on uniforms or tanks and missles bombing schools and hospotals? Kick rocks

China and North Korea are notorious for corruption and human trafficking yet no one has invaded them. Mexico is notorious for its drug cartel corruption, yet no one invaded them. Russia had no right to invade Ukraine. If he gets Ukraine you know he won’t stop there. He will act as Hitler and want more and more and more. Not just former soviet states, but everyone else’s nations as well. China is the same way. They want Taiwan, but they would not stop there. Sad truth is putin and what’s his face in China really want everything. So I don’t blame the swimmer for her stance. Thousands from her home country have died for the sake of putin’s personal greed.

Up next, Kazakhstan. Already sharing a southern Russian border with a northern region >40% ethnically Russian with the most gas exports… Im surprised it has not already happenes

You are wrong, its US and Britain who want everything. Why now after Us use Ukraine to provoke their sovereignity by join Nato? Its clear Britain and US the evil one here. They stole many land from original native and claim it as their land. Its britain who want to king of world.

Are the other Russian athletes that misguided that they actually believe they were being left out of competition for nationalism? Russians are excluded for large scale doping not nationalism, serious false comparison. Good to know that US doesn’t have the market cornered on undereducated athletes that should probably keep their mouths shut, and on media that is willing to give a huge voice to absolutely clueless people using completely broken logic in their arguments.

Russian athletes were not excluded from the World Championships for doping, they were excluded because of the invasion of Ukraine.

how dump is that! that is like jimmy carter stopping americans from the 80 olympics. how is it the swimmers fault?

I don’t get it these delusional ones trying to justify Putin. Let’s get the facts strait here. First no country during war is totally without civilian casualties BUT Russian troops are actively targeting them it’s no accident. Second the whole Nazi excuse doesn’t fly when Putin himself is acting EXACTLY like Hitler did. Third isn’t Russia supposed to be democratic country now that votes for their own leader so NATO would not target their country and neither would the United States so all of Putins reasons are garbage. I’ll tell you EXACTLY why Putin is doing this he is old school KGB and is heartbroken Russia isn’t as powerful as it once was and he wants to bring back the… Read more »

First off I would suggest that everyone do their own personal research and look never to one source for information on anything. The situation in Ukraine is in fact complex, but that Ukraine is one of the most corrupt countries in the world is a fact. It sadly is also known for human trafficking.

The Ukrainian Government of Zelenskyy was never going to address these horrific problems.

You need to find better sources. Look how corrupt our government is.

Just because the US, Chinese, and Russian governments are corrupt it does not excuse the corruption of even more governments. Elon is correct about the gerontocracy situation. Allowing people to remain in politics for too long is harmful to the human race. I would add that his comments should have pointed at the leaders of the entire world not just the US.

Soooo….. because they maybe a problem with human trafficking in Ukraine, that justifies another country to invade it? FYI – plenty of ruissian woman are also trafficked…

Because there is by corruption by your standards, that justifies another even more corrupt contributory invading it. USA has massive corruption, so someone should invade there? China? UK? Italy? Malta? Brazil? Mexico?

The Ukrainian Government of Zelenskyy was slowly addressing it, but it’s impossible to to fix an issue like that overnight.

Excellent points!
Exactly what I was thinking…👏

Found the Russian bot and or Q supporter

It’s always the pro-Putin puppets spouting off about doing “research” as some if there is any justification for the invasion of a sovereign nation.

Since you have done the research it should come as no surprise that both Human trafficking and Government corruption is ranked higher and worse in both Russia and Belarus. I guess this fact doesn’t suit the illogical simple-minded nature of your argument.

LOL, so is Russia. All your points can be made about Russia as well.

Could you please tell me, what country was her coach from, when she set junior world record?