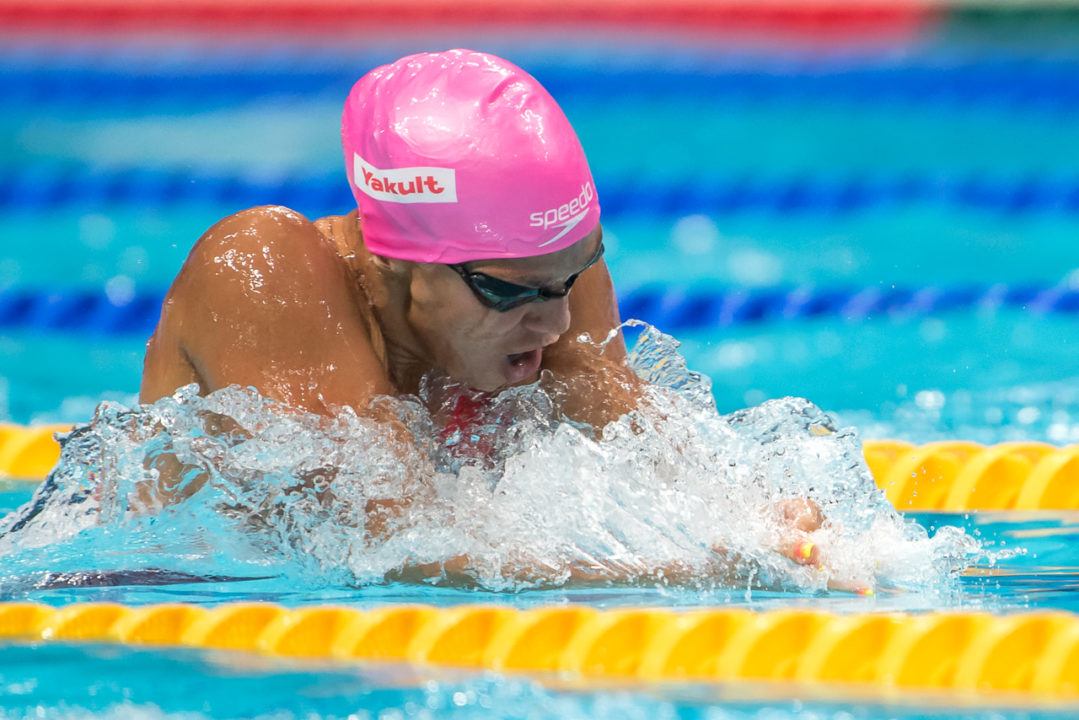 Russian athletes can still compete in Tokyo so long as they do so under a neutral flag, and so long as they are not serving an individual ban. Archive photo via Peter Sukenik/www.petersukenik.com

Lekic, who was his country’s first-ever medalist at the European Junior Swimming Championships, told the CAS that his positive test was the result of a tainted supplement.

Iranian National Team swimmer Kia Afzali has been suspended for three years for the use of Oxandrolone, an anabolic steroid.

In December, the World Anti-Doping Agency (WADA) banned Russia from Olympic and global sports for four years as a consequence of the nation’s history of state-run doping. Details of Russia‘s doping initiatives first surfaced amidst the 2014 Sochi Olympics, and a large-scale attempt to falsify and smudge doping records has since been uncovered, prompting WADA action.

This battle, entrapping not just athletes but fans, world leaders, sport governing bodies and media, has been raging for years. There have been compelling documentaries, limelight finger wags and intense political flare-ups that reflect larger, far-reaching global tensions. At times, it can be difficult to parse out not only who to blame, but who to punish (and how to ultimately eliminate doping in sport).

In the months since that ‘ban’ was announced, there has continued to be confusion among the general public as to what the terms actually mean. Weekly there are comments on SwimSwam asking ‘but I thought Russia was banned?’ In reality, the sanctions have the most to do with representation. Specifically, this ban means that the Russian flag, name and anthem are not allowed in Tokyo or at other global sporting events.

So, there will be no Russian flag on swim caps, jerseys, singlets, leotards or other equipment. Announcers will not call out ‘in lane four, Evgeny Rylov, of Russia,’ over the natatorium speakers in the 200-meter backstroke final; Russian athletes will be referenced and acknowledged under a neutral flag. Russian medalists will not hear their anthem play on the podium.

Russian athletes can, however, still participate in team events, including relays. This was borne out at the 2018 Winter Olympics, when the “Olympic Athletes from Russia” team won gold in men’s ice hockey. Swimmers will generally still qualify for the Tokyo Olympic Games in the same way as they would have without the ‘ban,’ both individually and in relays.

Another arm of the ban holds back Russian sport and government officials from attending the Olympics and other global sporting events in an official capacity, and Russia cannot host international events during the ban. Further, Russian officials can’t serve on governance committees of any doping code signatory; that would include a FINA committee, for example.

But, Russian athletes can still compete in Tokyo so long as they do so under a neutral flag, and so long as they are not serving an individual ban and so long as they are not implicated in non-compliance, including being named in the McLaren Report. This is how it went in Sochi. Granted, the ban still restricts Russian involvement and participation (mostly on the administrative side), and stamps out optics like the name, flag and anthem. Russian athletes, however, will certainly still be competing for medals in Tokyo.

The ban is more bark than bite, and it does not appease everybody, least of all the former head of Russia‘s national anti-doping laboratory, Grigory Rodchenkov. The orchestrator of Russia‘s doping strategy, who has since come forward about Russia‘s wrongdoings and fled the country, recently gave an interview to BBC saying that all Russian athletes should be barred from Tokyo.

Rodchenkov, who spoke so freely in the renowned documentary Icarus, talked to BBC by video call with a veil over his face and a straw hat over his head– after escaping to the USA following his tell-all to WADA, not even his lawyer knows his exact whereabouts.

USA are the champions of doping and coverups

They should be classified as independent Olympic athletes like others before and combined with other athletes so they don’t get acknowledged as competing for Russia at all .. and their medals do not count for the tally

What happened with Vlad Morozov? He was named in the McLaren report but has still raced at a high international level.

Maybe we could do something like withhold funding of WADA?

A ban obviously means they can still compete. It’s a ban from WADA after all.

Will the athletes have to prove that they are clean first?

Yes, and no. Most athletes who participate at the Olympic-final-level are tested at some point in the runup to an Olympic Games by one of a number of governing bodies. In that regard, I suppose, they’ll have to prove that they’re clean just like any other athlete.

It doesn’t appear, however, as though there is any special burden of proof being put on Russian athletes unless they were named in the McLaren report as an athlete who is known to have participated in a coverup scandal. Interestingly, originally, only 1 of 96 athletes were sanctioned for being named in the McLaren report. It feels like any athlete who was cleared and is being punished now will have a strong case… Read more »

The minute the Russian athletes touch down in Tokyo, the entire lot should be tested on the spot. Even the presence of a masking agent should deem the athlete ineligible.

Just dribbling nonsense as per usual.

The impression that I’ve been given by this ban is that removing the Russian flag seems to be more important than removing the doping athletes.

Yes, they have banned a song and a piece of fabric….shrug

WADA also announced that Sun Yang can compete next year as long as nobody talks about what he did and he doesn’t display a picture of a hammer on his cap. 🙄