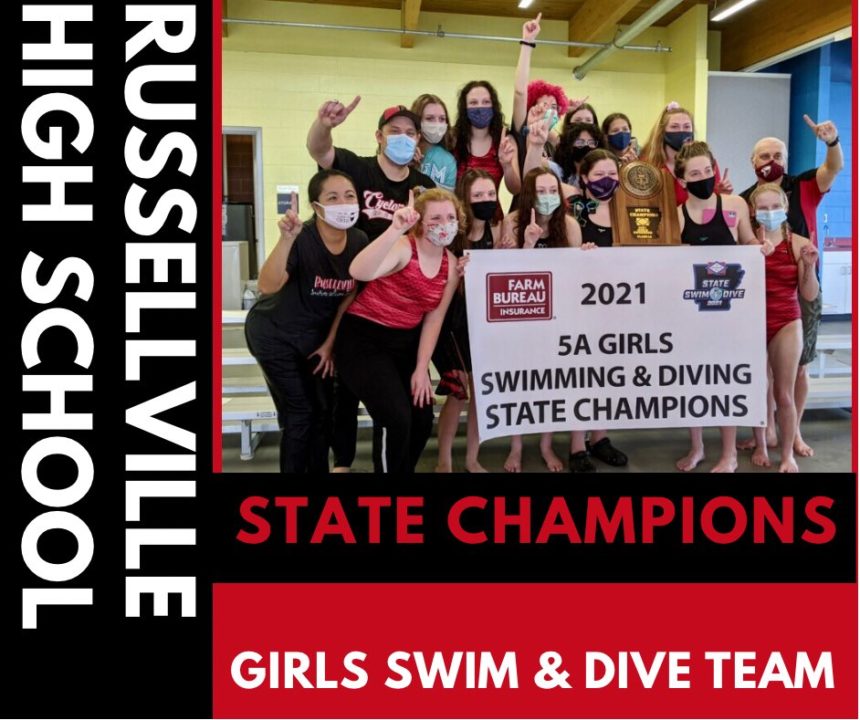 Despite winning only one event, the Russellville girls won their first state title while the boys won for the second year in a row. Current photo via Russellville High School

CIF-SDS canceled the 2021 Swimming & Diving Championships on Friday, marking the second year in a row that San Diego swimmers will forgo a championship meet.

Matt Fallon, a senior at the Pingry School in New Jersey, wrapped his high school career on Thursday with a National High School Record.

The Arkansas 5A (middle-sized schools) Swimming & Diving Championships was held from February 26-27 in Russellville. The Russellville High School girls used superior depth to capture their first state title, winning the AAA 5A championship by 24 points over Little Rock Christian.

Little Rock Christian was able to win 8 of the meet’s 12 events but lacked the numbers to pick up significant points from swimmers lower in the standings. This is in contrast to Russellville, who had only one event win but were able to place multiple swimmers in events to lead them to victory.

Ke, fresh-off Little Rock Christian’s win in the medley relay, would win the 200 freestyle for the third year in a row with a time of 1:59.54. Ke, who won the 100 butterfly at last year’s 5A meet, opted to swim the 100 free this year. She topped the field with a time of 53.62, nearly five seconds ahead of the next fastest swimmer. Russellville was able to score four swimmers in the 100 free, outscoring Little Rock Christian by 36 points.

Hall would be Little Rock Christian’s second double-event winner. She would pick-up her first win in the 100 butterfly, taking home the state title with a time of 58.43, over four seconds ahead of the next fastest swimmer. Hall, the two-time defending champion in the 100 backstroke, would three-peat the event. She lowered her own 5A state record from 58.32 last year to 57.55 this year.

Little Rock Christian was able to keep ahead of Russellville by scoring five swimmers in the 500 free. Olivia Paczwitz led the way in a tight race, winning by 0.10 with a time of 5:37.42.

In the 100 breaststroke, Carle repeated as champion, winning by over three seconds in 1:10.17. Russellville’s three swimmers were able to gain 10 points on Little Rock Christian in this event.

Madelyn Lynch, the runner-up at last year’s meet, would win her first state title by finishing first in the 50 freestyle with a time of 25.57

Compared to the girls side of the meet, the Russellville boys cruised to a 130-point victory, winning six events at the meet.

Following the medley relay, Griffith would swim the 200 freestyle, taking home the win by over four seconds with a time of 1:49.35. Griffith would win his second individual state title of the meet by finishing first in the 100 backstroke in 53.52.

Payne, the runner-up in the 100 breaststroke at last year’s meet, won his first individual state title with a time of 1:03.90, over three seconds faster than the next fastest swimmer.

John Isaac Majors of Little Rock Christian would sweep the 50 and 100 free events. Majors would win the 50 for the second year in a row, winning by over a second in 22.09. Majors won the 100 free for the second time in three years touching first in 48.19.