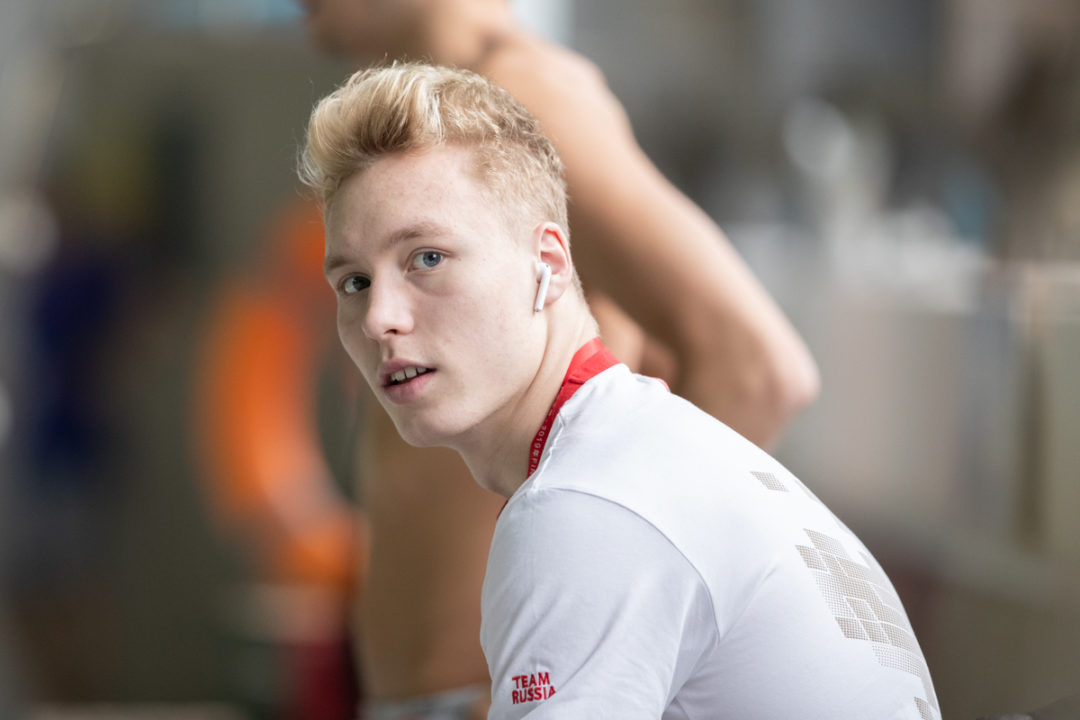 The seventeen-year-old Minakov says he plans to enroll at an American school next year after taking a pre-Olympic gap year. Archive photo via “Rafael/Domeyko Photography”

Minakov, 17, was slated to swim for the star-studded Energy Standard team. ISL teams pay their athletes and the league features hefty prize payouts as one of its central tenets. NCAA athletes must be amateurs, meaning they cannot accept money for their performances (which the exception of Olympic medal money from their home nation).

“First of all, I would like to thank Energy Standard for this marvelous opportunity,” Minakov told Swimming World. “And good luck to the team during the meets! I cheer for you guys!”

“This decision was made by several reasons, but the main for them is that I want to save eligibility for my future NCAA career, he continued. “As I always say, life isn’t just about swimming.”

“I hope my withdraw won’t affect the team’s success.”

Minakov added that he intends to enroll at an American university after the 2020 Olympics. He spent stints in 2018 training with the Terrapins Swim Team in Concord, California. There, he trained with Maldovan Alexei Sancov, now a sophomore at USC, who did his last two years of high school in the States.

Minakov has spent most of 2019 training in Russia, according to Swimming World. He’ll continue to travel in the upcoming year, which he’ll take off from school, but hopes to spend “at least a month” in the U.S.

Minakov will be a huge addition to any NCAA program. He took second at the 2019 FINA World Championships over the summer in the 100 fly, going 50.83 to become the 14th-fastest performer in history. He also won six gold medals at the 2018 Youth Olympic Games in the fall of 2018.

Minakov is the fourth swimmer to withdraw from the ISL recently. The others include Italians Ilaria Cusinato and Gabriele Detti, as well as France’s Lara Grangeon.

I think this may turn out to be a bad decision.

I’m not sure how sustainable the ISL will be, I would be trying to cash in now while I can.

In saying that I hope it works out for him.

He also has the potential to be a swimmer who doesn’t need to worry about money, barring inury. He has world record type of talent.
That being said, giving up a potential six-figure sum is a lot of money.

He has been planning to swim in US college since years ago. He said in an interview that he has interests in biology and chemistry, and wants to be a pharmacologist in the future. I think the academic opportunity is also an important factor for him, just as it is stated in the article, his life ‘isn’t just about swimming’. He is very clear about what he wants, so please don’t judge his decision like that.

The diploma from US University is very welcome in Russia and will help him to open many doors should he decide to come back home after graduation.
There is (at least was) a big gap between the group of great performing young swimmers and not that good national team in Russia. The main reason: sport is for children and youth. Real life demands real profession. And there is no joke about that.

Also, if he wants to live in the US long term, a US college background will help land jobs of the sort which qualify him for visas.

Wonder if the award winning movie Icarus inspired him to look into pharmacology as a possible major?

Having been a big part of a college team was the finest 4-year period of my life (it’s all about the total experiences you are afforded). If he “cashes in” now, the ISL folds in two years; he’s left with a little money & a loss of a total college experience which is worth about a half-million dollars. And, the cultural growth provided by being a part of an American university has even more value to a foreign student. Good planning!

He likely already owns a BMW , a Moscow apartment & a dasha.

Probably dacha, not Dasha.
Dasha is a girl name. But owning Dasha is also a sign of well standing. 😀

Yep you are right .of course.. However by the looks of him he will have several Dashas outside his dacha with their baskets of berries.

Actually, he has a venerable Dacia, that amazing old Romanian car!

Now owned by Renault. Nothing is owned by Eastern European countries anymore. They were “allowed” to join European Union, and in return, they had to turn over their country to Germans and other minor imperialists. Some freedom.

One more interesting fact about life of Andrei. He may have an apartment in Moscow (who knows) but he is living actually in Saint Petersburg.