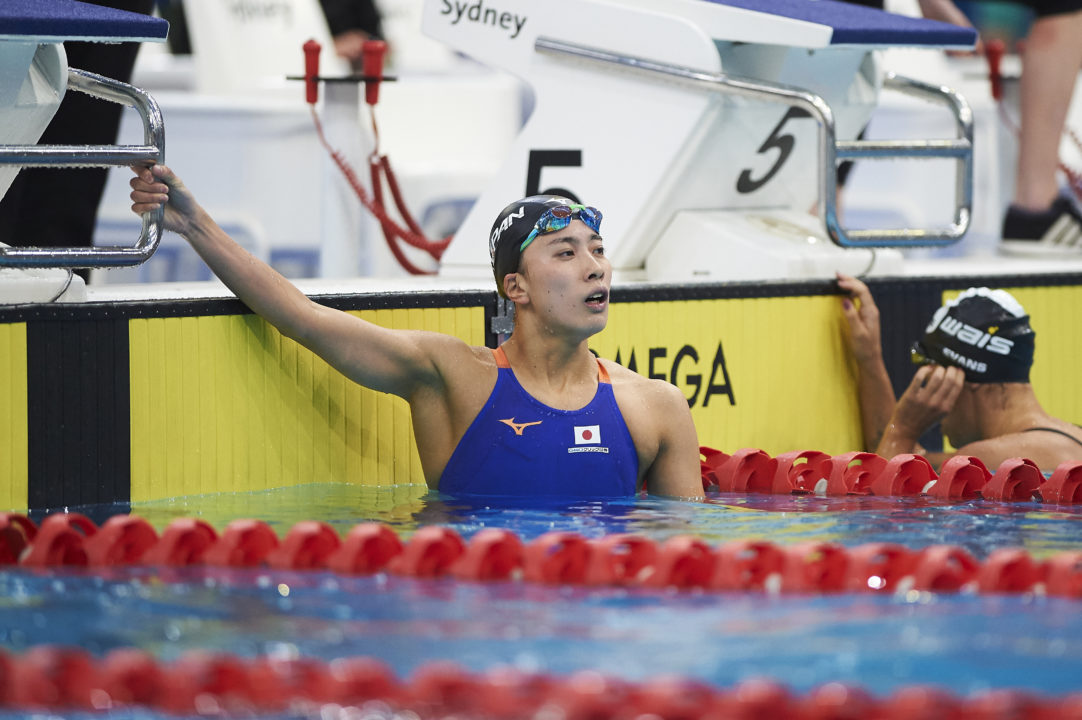 Day 1 of the swimming portion of the 2019 Japan National Sports Festival saw 25-year-old Olympic champion Kosuke Hagino in the water in his 2nd race since coming back after a break from competition.

After a several-month-long hiatus to tend to physical and mental health, Hagino returned to the pool at the FINA World Cup stop in Tokyo, collecting 200m IM bronze in a time of 2:00.03. Since that meet in early August, Hagino’s impending marriage to Japanese singer/songwriter miwa has been revealed, along with the couple’s announcement they are expecting their first child together this winter.

Hagino contested the men’s 200m IM once again tonight at the Ibaraki Swimming Arena, getting under the 2-minute barrier in a time of 1:59.76. That garnered a silver medal result behind winner Keita Sunama who touched the wall in 1:58.39 for the decisive win.

For Sunama, his outing tonight outperforms his previous best of 2019, which rested at the 1:58.70 notched for gold at the Japan Open this past May. As for Hagino, the man is used to hitting marks in the 1:57-range, but his improvement from his World Cup performance is a step in the right direction for the Bridgestone star.

The women’s 200m IM saw World Championships medalist Yui Ohashi put up a solid effort of 2:09.00, a time that crushed the previous meet record mark of 2:10.31. Ohashi’s time tonight would have placed the 23-year-old 5th in this year’s World Championships final, a race in which Ohashi found herself disqualified.

Ohashi was back in the water to race the women’s 100m fly tonight as well, beating the field once again to take a 2nd gold. Splitting 27.86/30.60, Ohashi managed to edge out Suzuka Hasegawa who hit the timepad just .11 later in a final mark of 58.55. Also making it close was Ai Soma who collected bronze in 58.62.

Last weekend at the Japanese Student Swimming Championships, Shinnosuke Ishikawa blasted a new 100m fly lifetime best of 51.11 to come within .11 of the Japanese National Record in the vent that’s been on the books since 2009. He wasn’t quite as electric tonight but still got the job done for gold in 52.16.

Teammate Yuki Kobori was also under 53 seconds with a silver medal-worthy time of 52.48. Kobori is the reigning Asian Games bronze medalist in this event.

Two-time World University Games gold medalist Waka Kobori made her mark on the women’s 400m freestyle race, clocking a winning time of 4:09.68. That not only represented the only time under the 4:10 threshold, but also the 4:11 mark in tonight’s final.

Kobori’s time tonight checks-in as the fastest of her 2019 season, beating out the 4:10.52 she logged last week for Japanese Student Swimming Championships gold, as well as the 4:11.16 notched at this year’s Japan Swim. Kobori is the reigning Asian Games bronze medalist in the women’s 1500m freestyle from Jakarta.

More recently at the aformetnioned WUGs in Naples, Kobori took golds across the women’s 800m and 1500m freestyle events.