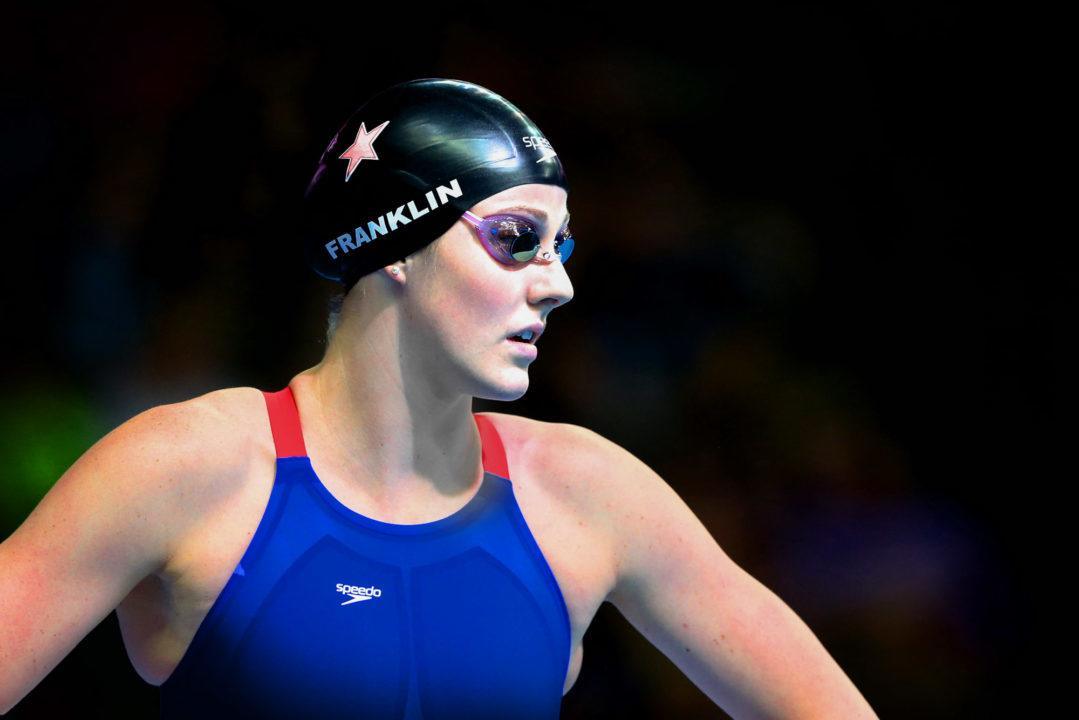 Olympic star Missy Franklin candidly reflected on the lessons she learned from her experiences in Brazil with Excelle Sports. Current photo via Tim Binning/TheSwimPictures.com

Every Olympic year is emotional. The visions, the goals and the sacrifices day in and day out together accumulate to one moment in time. A pivotal and life changing moment that is the absolute epitome of athlete excellence, the Olympic Games. The Rio Olympics were filled with stories of athletic triumphs, drug scandals and security mishaps yet behind the scenes were the deeper personal journeys of athletes in the midst of the pressure filled competition.

Four years ago at the 2012 Olympic Games in London, 17-year-old Missy Franklin walked away with five medals, four of them gold.  Franklin swept the 100m and 200m backstroke events, breaking the American and World records, respectively. She also added gold medals in the women’s 4x100m medley relay and the 4x200m freestyle relay and an additional bronze medal in the 4x100m freestyle relay. Franklin became the face of USA Swimming and the star of the Olympic Games in London.

Franklin is undeniably one of the best female swimmers in the history of the sport, yet this past summer in Rio, she failed to live up to the high expectations she had for herself. She finished in 13th place in the 200m freestyle and missed the final in her signature world record holding event, the 200m backstroke. She did, however, swim in the heats of the women’s 4x200m freestyle relay, securing another gold medal to her impressive collection. Franklin candidly reflected on the lessons she learned from her experiences in Brazil with Excelle Sports.

Kim Vandenberg: How was Rio for you and what lessons did you take away from the meet?

Missy Franklin: Rio was one of the hardest experiences I’ve ever had to face. To put in that much work, that much time, make so many sacrifices and falling so short of where I knew I was capable of being is just heart wrenching and soul shaking. I am still taking many lessons away from this experience, and believe I will continue to do so for a very long time. The largest lesson I’ve learned thus far is that I’m much stronger than I ever thought I was capable of being.

Vandenberg: How does it compare to London?

Franklin: London was just perfect. My career had been so smooth up to that point, and it peaked right when it needed to. I think back so often to those days and how much fun I was having. Moving forward, I think a huge goal for me will be channeling that optimism and energy I had at those first Games.

Vandenberg: What was your favorite memory from Rio, watching other friends on the team? Which race?

Franklin: Absolutely! Watching my teammates is the most exciting and inspiring thing in the world. Every race I watched was incredible, but I was especially impressed with Kathleen Baker. It took so much courage and bravery to come forward with her Chron’s disease before the Games began, and for her to have such an accomplished meet is simply astonishing. She is an inspiration in more ways than one to so many.

Vandenberg: Were you able to watch other events and meet other athletes in the village?

Franklin: I was able to go to a beach volleyball match with my parents! It was a blast! The atmosphere is so different than swimming. Swimming can be so intense and serious, so I was totally taken aback by the dance parties that happened after every single point in the game. It was honestly just like a giant party and it was a blast to see how much fun everyone was having. Also, the venus had to be one of the most incredible sports venues I’ve ever been to.

Vandenberg: Did you get to travel afterwards?

Franklin: I did not. As swimmers, going straight from Trials back into hard training, then two consecutive training camps, then to the village, by the time you’re done competing everyone is so excited to get home. I spent two weeks with my family in our lake house in the mountains and it was utter perfection. No cell service, no emails, just pure family time and enjoying God’s most beautiful gift of nature.

Franklin: I’m definitely taking my time getting back into training. Right after a four-year cycle is a great time for swimmers to just ease back on the grind of our usual daily regimen and really enjoy a little more flexibility in our schedules. I’m still working a lot, especially with our book (Relentless Spirit) coming out in a couple of months! There are a lot of exciting things going on and I’m doing my best to slow down and enjoy each one of them.

‘Also the venu (e)s had to be one of the most incredible sports venues I’ve ever been to’ .
The first gracious & positive comment on Rio in SwSw history .

She is so awesome. I would love to see her succeed in swimming and then coaching then in business. She also would make a great counselor or teacher. She showed tremendous class during the Olympics.