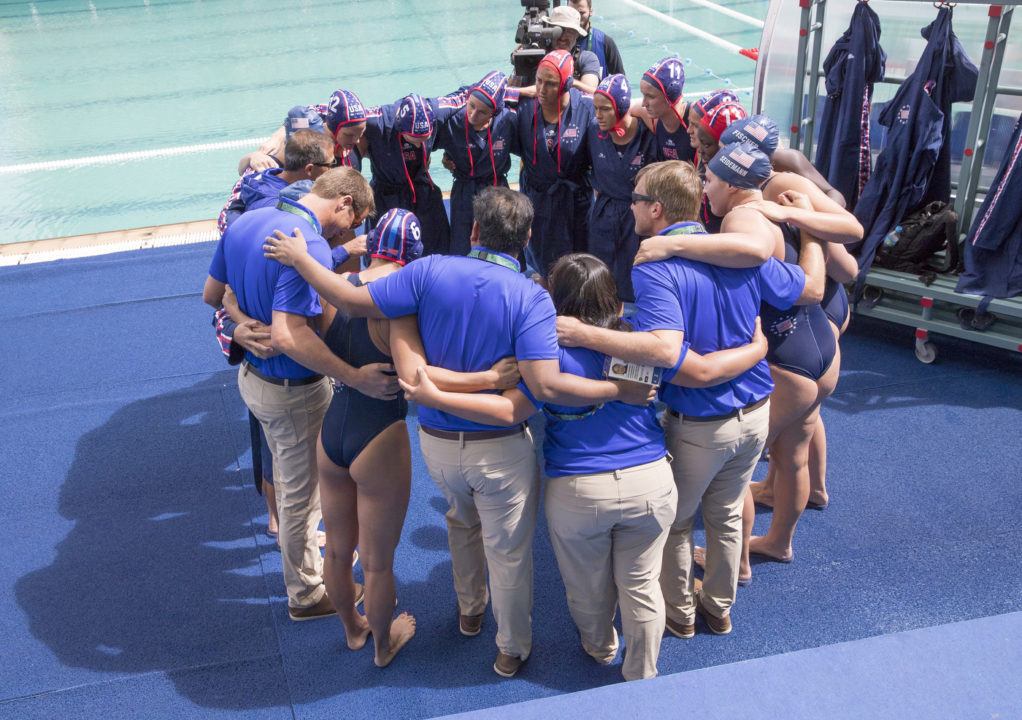 Here is the quick wrap-up of Day 3 of pool play in the women's water polo tournament in Rio. With only eight teams, all will pass through to quarterfinals but the teams’ standings will determine their seedings. Current photo via Jeff Cable/USAWP

Recap of women’s water polo from Day 3 of matches, August 13, 2016. This was the final day of group play for the women. With only eight teams, all will pass through to quarterfinals but the teams’ standings determine their seeding:

Spain won an important match against China to finish second in Group B play. The Spaniards jumped out front to an early 2-0 lead, but China evened the score with two power play goals in just over a minute, and the score was tied at 2 with :55 to play in the first quarter. Spain went up 3-2 with :16 left. China outscored Spain 4-3 in the second quarter and the two teams went off at halftime with Spain leading, 7-6. Two more for Spain, one for China in the third quarter gave Spain a 9-7 advantage heading into the final period. Spain outscored China 3-1 over the final 8 minutes of the game to seal their victory at 12-8.

Italy won its final game to remain undefeated in Group A, going a perfect 3-0 to wrap up pool play. The match began rather evenly, with Italy taking a 3-2 lead into the second quarter. Italy scored twice in the second quarter on power plays, while Russia added a power play goal of its own. Italy outscored Russia 3-1 in the third period, and 2-1 in the fourth. Italy’s domination of the second half gave them a 10-5 victory and a strong seeding heading into the quarterfinals.

Australia picked up a much-needed win against home team Brazil to finish second in Group A. After a somewhat quiet first period, in which each team scored one goal, Australia cracked open the match with three unanswered goals in the first four minutes of the second period. Brazil put one in with 1:31 left, and the teams headed off at halftime with Australia leading, 4-2. Three more unanswered goals in the third period put Australia up 7-2. The Australians outscored their hosts 3-1 during the final eight minutes for a 10-3 rout of Brazil.