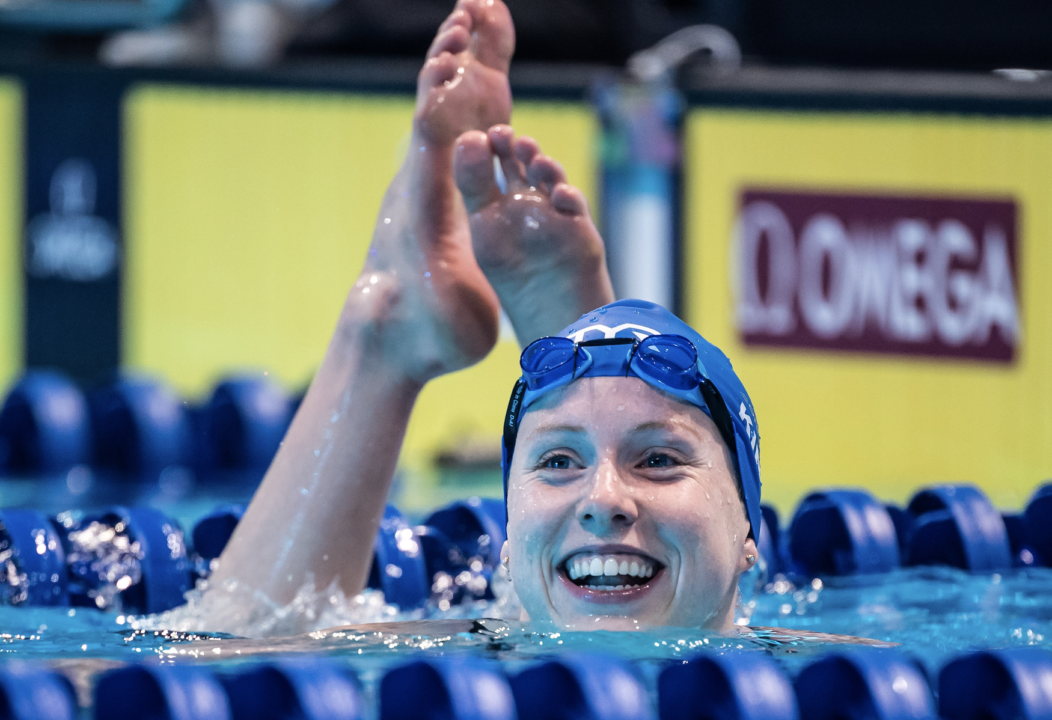 Lilly King's unbeaten streak remains alive in the ISL, but it will challenged once again by Alia Atkinson and the London Roar in Match 10. Current photo via Mike Lewis/Ola Vista Photography

The end of last week featured a marquee matchup in the 2020 ISL season, as the only two undefeated clubs remaining — the Cali Condors and London Roar — battled head-to-head. The match lived up to the hype, as the Condors eked out a close 15.5-point victory to move to 3-0.

Match 10 will see the two clubs go at it again, with the LA Current and Aqua Centurions thrown into the mix.

The Condors lead the league with 12 points, while London is tied for second, LA is tied for fourth, and the Centurions are back in last place.

Here are some key storylines to key in on for the match:

1. King vs Atkinson Round 2

It’s been well documented that Lilly King has never lost an ISL race. The fact remains true after Match 8, but she had her most difficult test yet while facing London’s Alia Atkinson.

Atkinson, who competed for Iron last season and never ended up raced King, finally shared the pool with the American Olympic gold medalist last match, finishing just .14 seconds back in the women’s 100 breast.

King also had a close call in the 50, where teammate Molly Hannis was .05 behind her, and in the women’s medley relay, King and the Condors edged out Atkinson and the Roar by .12. Cali chose breaststroke for the women’s skins, where King once again had to fend off Atkinson, topping her by .28, .23 and .58 in rounds one through three, respectively.

The three will go at it once again in Match 10, with London’s Annie Lazor also in the mix. Will King remain unbeaten? It wouldn’t be smart to bet against her, but you can be sure Atkinson, Hannis and London’s medley relay team will give her all she can handle.

Some of the fastest swimmers this season in the men’s 100 fly and 100 back will meet in Match 10, with some intriguing skins possibilities at play.

In-state rivals Cali and LA haven’t raced since the season opener, where Tom Shields defeated Caeleb Dressel by four one-hundredths in the 100 fly. Shields has only gotten faster, becoming the only man to break 49 this season in Match 5 (48.94), while Dressel had his best performance of the season in Match 8 (49.33).

Dressel did get the victory over Shields in the 50 fly in Match 1, but the LA Current member has been nine one-hundredths better for the season as a whole (22.32).

And then there’s Szebasztian Szabo of the Aqua Centurions, who is yet to lose the 50 fly this season and is the only man under 22 seconds. It will also be the first time he and Dressel race head-to-head in the ISL. How fun would a butterfly skins race be?

Based on flat start times, Szabo is a few ticks off of being competitive with Shields and Dressel in the 100 fly (49.75), but in reality, he’s split 48.9 on the medley relay so he can’t be counted out.

In the 100 back, last season we saw Guilherme Guido and Ryan Murphy constantly jockeying for position as the league’s top backstroker. That’s essentially the case again this year, though Energy Standard’s Kliment Kolesnikov recently took over the top time in the 100 back in 49.16.

The Current raced in three of the league’s first five matches this season, and now having had over a week off, we could see Murphy come back with a big showing here against Guido.

Coleman Stewart of the Cali Condors will also be a factor in the sprint backstrokes, as the former NCAA champion turned up the heat by winning the 50 back and going 49.89 in the 100 back last match.

It hasn’t been a great season for the Aqua Centurions, with a relatively weak women’s squad putting them at the bottom of the standings, but there have been a few bright spots, particularly in their men’s freestyle relay.

The club has yet to lose the men’s 4×100 free, and will put that streak on the line against three very competent teams.

The Centurions are the only club to dip under the 3:05-barrier so far, while the Condors are coming off a Match 8 win in 3:06.07. Dressel is their ace in the hole, but Justin Ress has also come on in recent matches and will be valuable as well.

LA is the #2 club this year at 3:05.67, done head-to-head with the Centurions in Match 3. They have Maxime Rooney and Kristian Gkolomeev capable of splitting in the 45s, along with Marco Ferreira who can lead off in 46-mid.

The London Roar also have Mikhail Vekovishchev and Duncan Scott who have been under 46 with a takeover, but haven’t been able to all fire on all cylinders on the same relay as of yet.

While they’ll certainly be challenged, the Aqua Centurion roster of Pedro Spajari, Marcelo Chierighini, Alessandro Miressi and Szabo appears to be a cut above the rest in this particular race.

I wonder who established this illustriously balanced schedule.

London has the worst draw. They also have the 3 consecutive matches to finish the season like ENS coach was complaining about but they also have to meet CAC back to back separated by only 3 days with LAC also thrown in on the final match. ENS for comparison hasn’t met another of the top 4 teams since match 1. ENS also dodges LON the whole season.

Crappy scheduling… shouldnt be handled by a team owner…

They could have easily swapped Energy for Cali in the final double header to balance out a bit. With 10 teams and 4 matches most balanced would have been 1 match against all the teams plus an additional 2nd against 3. We’ve got some teams seeing each other 3 times and others zero which makes no sense, especially with the double header options to easily swap in and out.

I think we have to remember that competitiveness of the league isn’t the only goal in things like scheduling. I’m almost positive that television scheduling has gone into weight here, and that might be why we see some imbalanced scheduling.

Notice the match times of Cali Condor meets. Notice that Cali Condors were on CBS Network television. Cali Condors never had a meet that started at 4AM in the US. Swapping Energy and Cali in the lest week would have put Cali in the 4AM US Eastern time slot, and 1AM Pacific time slot.

That’s fine if they’re just creating a reality tv show or a game show (which ISL increasingly resembles with things like jackpots) but to be a proper sports league fairness is paramount. All proper professional sports leagues have procedures that ensure fairness when creating schedules and allocating semi-finals, etc. It really shouldn’t be left up to the whims of league management.

Also just because they swap Cali and Energy desn’t mean they can’t also change the timeslots.

Fair enough. Then leave Energy at 1am and bring on London, aqua. Then leave Cali in their slot plus LA and bring in Toronto and Tokyo.

Is this scheduling simply to give ES the best shot possible. Lmao how pathetic

The teams with an advantage in the double header are the teams with a bi on either match. Those teams are LA, Aqua, DC, and NY. Energy had the same double meet with all the other teams including London and Cali.